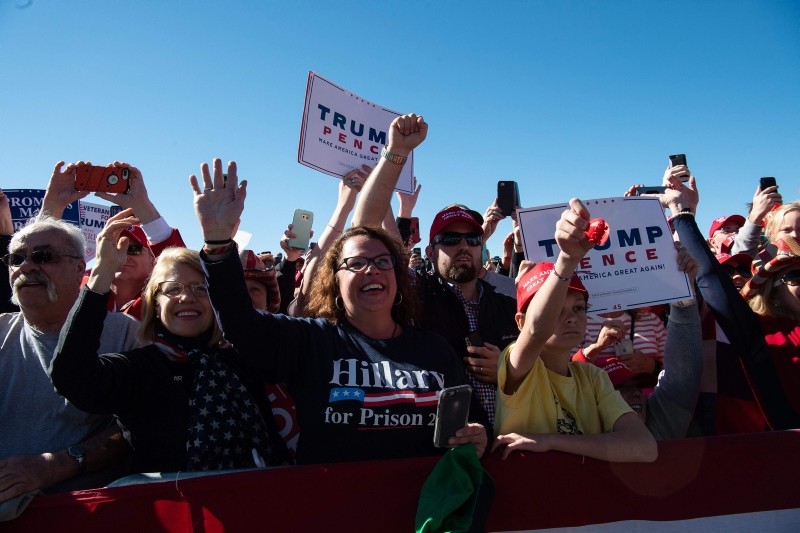 Anti-Muslim rhetoric has surged in U.S. midterm election campaigns, a new study found, echoing the brash talk of President Donald Trump that apparently landed him his spot in the White House.

As Americans head to the polls on Nov. 6, attempts to demonize immigrants and people of color are a deep, consistent rallying point among candidates, the study commissioned by Muslim Advocates found.

"We've seen anti-Muslim candidates running in every region. We've seen them running at entry level of office, from school and planning boards all the way to governor and Congress. We've seen it in liberal places and conservative places," Scott Simpson, the public advocacy director of Muslim Advocates, was quoted by the Guardian as saying.

"It has really taken root and become very widespread," he added.

The report – which examined more than 80 nationwide campaigns that have openly targeted Muslims in the past two years – found that 64 percent of these candidates are either elected or appointed officials or have a presidential endorsement.

More than a third of candidates said that the Muslim community is a major threat to national security, propagating the existence of a conspiracy to take over U.S. communities or the government. Just under a third have called for Muslims to be denied human rights or asserted that Islam is not a religion.

President Trump's views expressed on the campaign trail and from the Oval Office have stoked the fire of Islamophobia rhetoric in the political mainstream, proliferating hate speech and anti-Muslim sentiment.

Mohamed Gula, political director at Emgage, remarked "how easy it is for candidates to really use Islamophobic and hateful rhetoric as a part of their platform" since the 2016 presidential election.

"Whether you go to a masjid or are part of any institution within the Muslim community, you're attached to the Muslim Brotherhood," he told the Guardian.

In one congressional race in California, Mexican-Palestinian Democrat candidate Ammar Campa-Najjar was accused by Republican opponent Duncan Hunter of being a "security risk" who was "working to infiltrate Congress" with the backing of the Muslim Brotherhood.

Highlighting the degree of Hunter's careless ignorance is the fact that Campa-Najjar is a Christian. Speaking to the Guardian, the democrat called his opponents attacks "blatantly ignorant" and "unhinged from reality."

On the other side of the country, Virginia Democratic candidate Abigail Spanberger has been slammed for working as a substitute teacher at a Saudi-funded school, accused in political ads of trying to hide her work at "an Islamic school nicknamed 'Terror High, a terrorist breeding ground.'"

Spanberger, who taught at the school briefly in 2002 and 2003, was later granted a CIA security clearance and was sent abroad to work on anti-terrorism activities.

Gula said organizations like Emgage, which aims to elect more Muslims, believe that the most effective method to counter Islamophobia in politics is to build a solid presence in public office. And, despite the rise in anti-Muslim attacks, the 2018 midterms have also seen unprecedented numbers of Muslim candidates.

"Being able to rewrite and redefine what it means to be socially responsible and civically engaged within our communities is of huge importance. We've seen a little over (100) Muslims run for office… That was once unheard of," he said.

There are currently only two Muslim men in Congress: Minnesota Rep. Keith Ellison, who in 2007 became the first Muslim to take office, and Indiana Rep. Andre Carson. There are several Muslim female candidates on the ballots for Nov. 6, including Palestinian-American Rashida Tlaib, who is running uncontested in Michigan.

According to a leading Muslim advocacy group, the Council on American-Islamic Relations (CAIR), the number of anti-Muslim hate crimes in the U.S. rose 91 percent in the first half of 2017, compared with the same period in 2016. The most frequent type of incidents, documented by CAIR in the second quarter of 2017 involved harassment, defined as a non-violent or non-threatening incident. The second most common type of bias incidents were hate crimes and involved physical violence or property damage. CAIR said the most prevalent trigger of anti-Muslim bias incidents in 2017 remains the victim's ethnicity or national origin, accounting for 32 percent of the total.