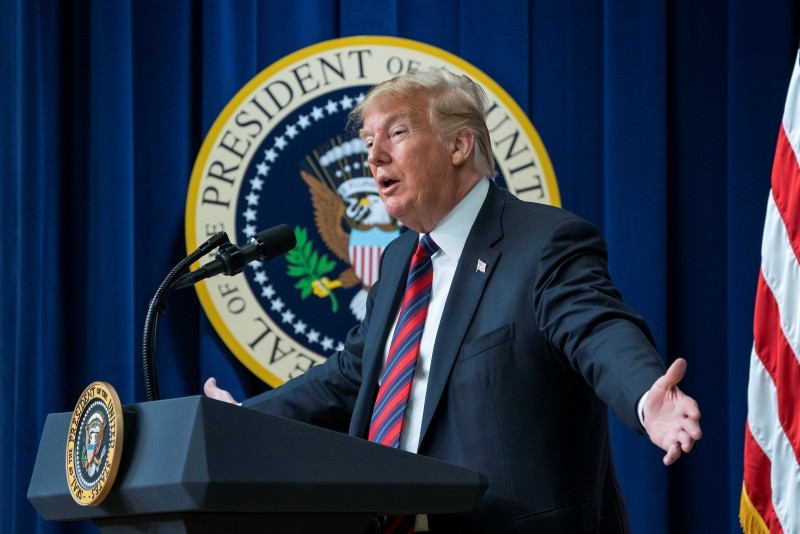 U.S. President Donald Trump on Tuesday called Saudi efforts to hide Jamal Khashoggi's murder "worst cover-up ever", and said he will leave the consequences for Saudi Arabia up to Congress in consultation with him.

"They had a very bad original concept. It was carried out poorly, and the cover up was one of the worst in the history of coverups," Trump told reporters at the White House.

"Whoever thought of that idea is in big trouble, should be in big trouble," Trump said. He noted that Saudi Arabia is in a "nasty part of the world" but that was not an excuse.

When asked about President Recep Tayyip Erdoğan's remarks about the killing of Saudi journalist Khashoggi, Trump said his comments were "pretty rough" but he criticized Riyadh's handling of the matter.

Trump said he wanted to get all the facts on Khashoggi's death at the Saudi consulate in Istanbul before agreeing with Erdoğan's assessment. Trump, who sent his CIA director to Turkey to discuss the issue, said he expected to have a report pretty soon

Khashoggi was last seen entering the Saudi Consulate in Istanbul on Oct. 2. He was never seen exiting the diplomatic facility.

Saudi Arabia has claimed Khashoggi, a writer for The Washington Post who wrote critically about Saudi Crown Prince Mohammed bin Salman, died accidentally in a brawl at the Saudi Consulate in Istanbul that day.

But Turkish officials say a 15-men team tortured, killed and dismembered the writer and say Saudi officials had planned the killing for days.

Trump 'may' meet Putin in Paris

Trump said he "may" meet with Russian President Vladimir Putin when he is in Paris on November 11.

Secretary of State Bolton had earlier said Trump wished to meet Putin when the two visit Paris on November 11 for World War I commemorations.

During a press conference he said arrangements were being made for that meeting.

The United States is seeking to withdraw from a decades-old nuclear weapons treaty on an accusation that Russia has violated it.

The Kremlin, which denies that allegation, is against the US ending the bilateral pact, saying such a move would jeopardize international security.