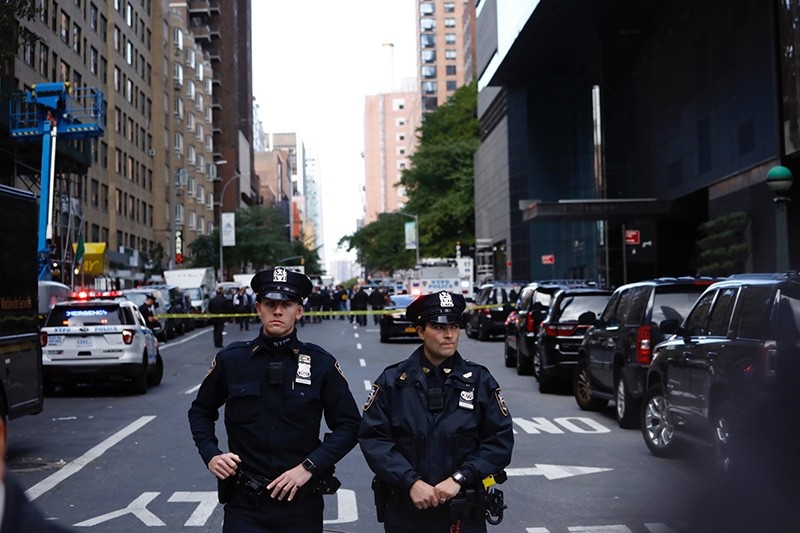 The FBI said Florida Rep. Deborah Wasserman Schultz received a similar package, possibly misaddress and then sent to her as the return addressee. Another suspicious package addressed to Democratic Rep. Maxine Waters of California was intercepted at a congressional mail screening facility in Capitol Heights, Maryland.

A similar device was found Monday at the New York compound of liberal billionaire George Soros, a major contributor to Democratic causes.

There were no explosions and no reports of injuries. 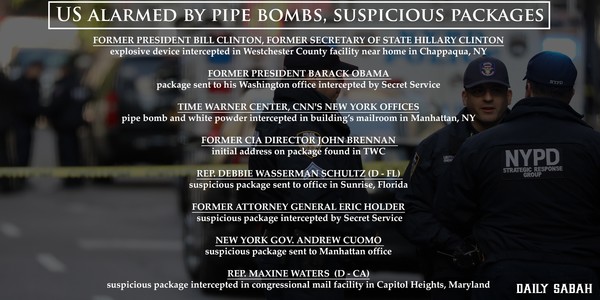 The bombs were intercepted two weeks before nationwide elections that could reshape Congress and serve as a referendum on the first two years of Donald Trump's presidency. The events quickly overtook other campaign news in an already-tense political season, which has included pitched fights over immigration, the Supreme Court and sexual violence against women.

The White House quickly condemned the attacks aimed at Democrats and perceived foes of the administration. Republican Vice President Mike Pence said they "have no place in this country," and Trump tweeted, "I agree wholeheartedly."

"The full weight of our government is being deployed to conduct this investigation and bring those responsible for these despicable acts to justice. We will spare no resources or expense in this effort," Trump said later in Wednesday at an event on opioid abuse.

"In these times, we have to unify, we have to come together, and send one very clear, strong, unmistakable message that acts or threats of political violence of any kind have no place in the United States of America."

All the confirmed bombs appeared to come from the same person or persons, said John Miller, the New York Police Department's head of intelligence and counter-terrorism, who briefed reporters in New York.

The U.S. Secret Service intercepted a bomb that was addressed to Hillary Clinton at the Chappaqua, New York, home she shares with former President Bill Clinton, and another that was sent to former President Obama at his home with Michelle Obama in Washington. A police bomb squad removed still another from CNN's New York headquarters, which was evacuated.

Overhead TV shots showed a truck carrying that device, which law enforcement officials said was linked to the other explosives, being driven away. The package sent to CNN contained a live explosive and envelope with white powder, and officials said the substance was being tested to see if it was dangerous.

A U.S. official told The Associated Press that investigators believe the explosive that was discovered near the Clintons' home was linked to one found Monday at the Soros compound.

The official noted that one of the packages had the return address of Florida Rep. Schultz, an ironic reference to the former chairwoman of the Democratic National Committee who was accused by Clinton rivals of secretly helping the party's eventual presidential nominee.

Images shared on Twitter by local media showed a bomb squad unit heading to her building in the south Florida town of Sunrise, around 30 miles (50 kilometers) north of Miami.

Democratic Rep. Waters confirmed her Washington office was the target of a suspicious package.

"I have been informed by U.S. Capitol Police that my Washington, D.C. office was the target of a suspicious package that has been referred to the FBI," Waters said in a statement.

Neither Clinton nor Obama received the packages, and neither was at risk of receiving them because of screening procedures, the Secret Service said.

White House press secretary Sarah Sanders said in a statement, "These terrorizing acts are despicable, and anyone responsible will be held accountable to the fullest extent of the law."

Two law enforcement officials, speaking to AP on condition of anonymity to discuss an ongoing investigation, said the pipe bomb at CNN was crude but operational and was addressed to former CIA Director John Brennan, who regularly appears as a television contributor and who has publicly clashed with Trump. They said it was similar to other explosives discovered in the past few days. Officers also found an envelope with white powder along with the live explosive device, the NYPD commissioner said.

Hillary Clinton was attending campaign events for Democrats in Florida on Tuesday and Wednesday and was not at the family's New York residence at the time. Bill Clinton was at the family's Chappaqua home at the time the package was intercepted Tuesday night at a Westchester County facility, said a person familiar with his schedule. The person said the device was screened at the facility — not in proximity to their residence — and never reached the Clintons' home.

Investigators were trying to track down another suspicious parcel they believe was addressed to Obama's vice president, Joe Biden, a federal official told Reuters late on Wednesday.

New York Gov. Andrew Cuomo said his office received a similar package but an NYPD spokesman later confirmed the item was not a bomb and was unrelated to the other devices.

The office of California Democratic Sen. Kamala Harris in San Diego was evacuated over another suspicious package, but city police later confirmed the boxes were harmless.

The downtown building, which also contains the offices of the San Diego Union-Tribune newspaper, was evacuated "out of an abundance of caution" when someone noticed five boxes stacked up outside, but X-ray tests confirmed the contents posed no threat, San Diego Police Department Lieutenant Kevin Wadhams told KUSI television.

A law enforcement official told the AP that the package discovered at Soros' home appeared to be a pipe bomb and was in a package placed in a mailbox outside the gates of the compound. A Soros employee opened it just inside the gates, not near Soros' quarters, the official said.