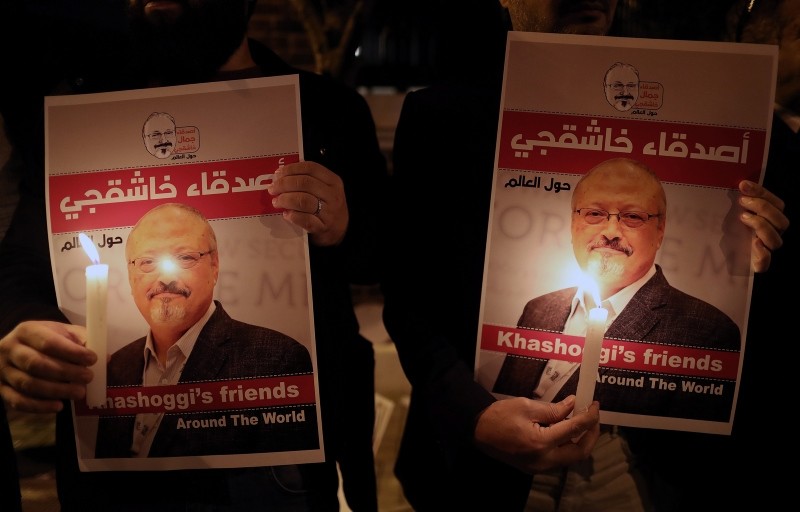 Protestors hold candles and pictures of Jamal Khashoggi during the demonstration in front of Saudi Arabian consulate in Istanbul, October 25, 2018. (EPA Photo)
by Daily Sabah Oct 26, 2018 12:00 am

If it wasn't for President Recep Tayyip Erdoğan's demands from Saudi Arabia to reveal the truth about dissident journalist Jamal Khashoggi's murder, the kingdom likely would not have admitted to it, the Washington Post has said, urging the U.S. administration to come to its own conclusion and explain the crown prince's doing in all of this.

In an editorial piece published Thursday, the newspaper slammed Saudi Crown Prince Mohammed bin Salman and the Saudi leadership for keeping details about the murder under wraps and still leaving crucial questions unanswered.

The piece underlined that the Saudis had to accept the truth after Erdoğan revealed evidence and details about the case. On Thursday, Saudi prosecutors said Khashoggi's killing was premeditated, citing Turkish evidence.

The admission, although may seem significant, was "just to conform" to Erdoğan's public demands and was done with the expectation that Turkey will "suppress some of the evidence it controls," the paper said.

In the article titled "Saudi Arabia admits Khashoggi's murder was premeditated. Fine. Who premeditated it?", the paper demanded answers from the Saudi leadership on two main questions: Who gave the order and what was the prince's role in all of this?

"Five probable members of his personal security detail have been identified among the 15-member team that reportedly traveled to Istanbul to assault Mr. Khashoggi inside the consulate. Two of the crown prince's closest aides, including the keeper of his enemies list and the deputy chief of Saudi intelligence, are among the officials whose firings were announced last week," the piece noted.

Stating that all arrows pointed to Prince Salman as the "premeditator" in the case, the newspaper also slammed Trump's protective attitude towards his "close-allies" the Saudis.

"What Mr. Trump should really want is the truth," it said, adding that Washington must rethink its relationship with Riyadh if Prince Mohammed "oversaw or sanctioned the brutal butchering."

In a major twist in its narrative so far, Saudi Arabia on Thursday admitted that evidence shows that the killing of Khashoggi was "premeditated."

By saying it was "planned", Saudi prosecutors contradicted assertions by Saudi royals just days ago that rogue officials from the kingdom killed him by mistake in a "brawl" inside their Istanbul consulate.

This was not the Saudi side's first backtracking.

Initially, after the journalist disappeared on Oct. 2, Saudi authorities claimed they knew absolutely nothing about what happened to the columnist.

Shortly after, as more details started to emerge about his disappearance, Saudi Arabia then insisted Khashoggi had walked out of the consulate after visiting the building. It later dropped that account for a new one, saying it had detained 18 people – including the 15-man team revealed by Turkish authorities – for what it described as an accidental killing.

The rapidly shifting explanations indicate Saudi Arabia is scrambling for a way out of the crisis but growing international skepticism has strengthened claims that the crime was carried out with the knowledge of Prince Mohammed, the kingdom's heir apparent.

Prince Mohammed spoke with Erdoğan on the phone on Wednesday for the first time since the murder. He has denied any involvement and the kingdom's leadership has pushed responsibility down the chain of command

At a conference in Riyadh the same day, the crown prince said the killing was a "heinous crime that cannot be justified" and warned against any efforts to "manipulate" the crisis.

A day later he attended the first meeting of a committee aiming to restructure the kingdom's intelligence services after the killing of Khashoggi.

The murder has further highlighted the brutal lengths to which some top officials in the Saudi government have gone to silence its critics.

Khashoggi, who lived in self-imposed exile in the United States for nearly a year before his death, had written critically of Prince Mohammed's crackdown on dissent.
Last Update: Oct 26, 2018 5:00 pm
RELATED TOPICS