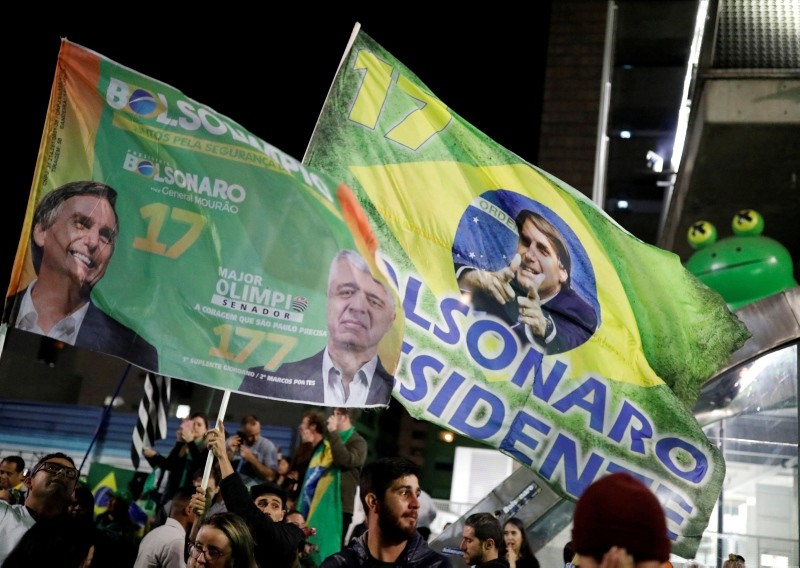 Former army captain Jair Bolsonaro was elected president of Brazil on Sunday, promising a fundamental change in direction for the giant Latin American country, the latest to take a turn to the far-right.

Despite repulsing many with his open support of the torture used by Brazil's former military regime, as well as remarks deemed misogynist, racist and homophobic, Bolsonaro managed to tap voters' deep anger with corruption, crime and economic malaise.

Official results gave the controversial president-elect 55.13 percent of the vote in the run-off election, to 44.87 for leftist opponent Fernando Haddad, with 99.99 percent of the ballots counted.

Bolsonaro, 63, will take office on January 1.

"We will change Brazil's destiny together," he said in his victory speech -- broadcast live from his home on Facebook, the platform he has used to campaign since an attacker stabbed him in the stomach at a rally on September 6.

Sitting next to his wife and wearing a dark blazer, the longtime congressman delivered his speech in a stern voice.

He pledged to govern "following the Bible and the constitution," and said: "We cannot continue flirting with socialism, communism, populism and the extremism of the left."

But he promised to defend "the constitution, democracy and freedom," fending off opponents' warnings he would try to veer toward authoritarianism after openly expressing his admiration for Brazil's brutal military dictatorship (1964-1985).

Bolsonaro said he would "pacify" Brazil following a race that revealed deep divisions and was repeatedly marred by violence. The candidate himself was stabbed and almost died while campaigning in early September, and there were numerous reports of politically motivated violence, especially directed at gay people.

"This country belongs to all of us, Brazilians by birth or by heart, a Brazil of diverse opinions, colors and orientations," he said, reading off a sheet of paper in a live television address.

His victory moved Brazil, the world's fourth-largest democracy, sharply to the right after four consecutive elections in which candidates from the left-leaning Workers' Party won.

Like other right-leaning leaders who have risen to power around the globe, Bolsonaro built his popularity on a mixture of tough talk and hardline positions. And, like many, he is sure to face stiff pushback from groups concerned that his strong views will lead to policies that threaten democratic institutions.

Thousands of supporters flooded the streets outside his home in Rio de Janeiro, waving Brazilian flags and lighting up the sky with fireworks.

"All these people here are outraged, upset about corruption and crime, and we are with Bolsonaro. The people have spoken. For the first time I feel represented," said Andre Luiz Lobo, 38, a businessman who -- not incidentally, given the accusations of racism against his candidate -- is black.

"Both expressed a strong commitment to work side-by-side to improve the lives of the people of the United States and Brazil, and as regional leaders, of the Americas," White House spokeswoman Sarah Sanders said.

Dubbed the "Tropical Trump" by some, Bolsonaro publicly admires the American leader.

On the other side, the reaction was despair -- and a defiant vow to resist.

Haddad, a former Sao Paulo mayor, said he would fight to "defend the freedoms of those 45 million people" who voted for him, after Bolsonaro vowed late in the campaign to "cleanse" Brazil of leftist "reds."

Aides said Haddad, 55, had not called Bolsonaro, whom he had accused of spreading lies about him and his family, to congratulate him.

Haddad promised a fight while saying he would respect the country's institutions.

"We have the responsibility to mount an opposition, putting national interests, the interests of the entire Brazilian people, above everything," Haddad said in a speech to supporters. "Brazil has possibly never needed the exercise of citizenship more than right now."

Amid the celebrations by Bolsonaro's supporters, there were also reports of some clashes between his backers and opponents.

"I'm surprised Brazilians would vote for hate, for guns," said Flavia Castelhanos, 31, after wiping away her tears, wearing a pin that said "Not him" -- opponents' rallying cry against Bolsonaro.

"This is a dark day for Brazil. Brazilian democracy is now in complete crisis," said Mark Weisbrot of the Center for Economic and Policy Research in Washington.

The environmental group Amazon Watch warned victory for Bolsonaro -- who has vowed not to let conservation programs interfere with agro-industry -- "spells disaster for the Brazilian Amazon."

Bolsonaro has offended many in Brazil and beyond with his vitriolic rhetoric.

He once told a lawmaker he opposed that she "wasn't worth raping"; he has said he would rather see his sons die than come out as gay; and he commented after visiting one black community that they "do nothing -- they're so useless I doubt they can procreate."

But an even larger portion of voters rejected Haddad and the tarnished legacy of the Workers' Party, which had won the past four presidential elections.

The polls came on the heels of Brazil's worst-ever recession, a staggering multi-billion-dollar corruption scandal and a year of record-setting violent crime.

Haddad stood as a surrogate for the popular -- but imprisoned -- ex-president Luiz Inacio Lula da Silva, who led Brazil through the boom years of 2003 to 2010, before both the country and his left-wing political project went bust.

The highly divisive Lula, who stands accused of masterminding the massive pilfering of state oil company Petrobras, was barred from running because he is serving a 12-year sentence for bribery.

Center-right President Michel Temer, who is set to leave office as the most unpopular leader in Brazil's modern democracy, congratulated Bolsonaro and said the transition process would start Monday.

The rise of Bolsonaro, who cast himself as a political outsider despite a largely lackluster 27-year career in Congress, parallels the emergence of hard-right leaders in many countries. But his extreme messages were rendered more palatable by a perfect storm in Brazil: widespread anger at the political class after years of corruption, an economy that has struggled to recover from a punishing recession and a surge in violence.

In particular, many Brazilians were furious with the Workers' Party for its role in the graft scheme revealed by the "Operation Car Wash" investigation, which uncovered billions of dollars in bribes paid to politicians via inflated construction contracts.

Haddad struggled to build momentum with his promises of a return to the boom times by investing in health and education and reducing poverty. It didn't help that the man who appointed Haddad as the party's candidate, former President Luiz Inacio da Silva, is serving a 12-year sentence for a corruption conviction.

Bolsonaro's candidacy raised serious concerns that he would roll back civil rights and weaken institutions in what remains a young democracy. He has frequently disparaged women, gays and blacks, and said he would name military men to his Cabinet.

Within minutes of his victory being declared, international civil rights groups expressed concerns. Human Rights Watch called on Brazil's judiciary and other institutions to "resist any attempt to undermine human rights, the rule of law and democracy under Jair Bolsonaro's government."

Steve Schwartzman of the Environmental Defense Fund warned that Bolsonaro's promises about the environment would be "dangerous to the planet."

Bolsonaro has repeatedly said he would pull Brazil from the Paris agreement on climate change, though last week he backed off on that. He has also promised to cut environmental regulations and make Brazil friendlier to international investors.

The past few years in Brazil have been exceptionally turbulent. In 2016, then-President Dilma Rousseff of the Workers' Party was impeached and removed from office on charges that many on the left felt were politically motivated. The economy suffered a two-year recession and is only now beginning to emerge, with growth stagnant and unemployment high.

Dozens of politicians and executives have been jailed in the corruption investigation.

Many observers had predicted a newcomer would emerge to harness the anti-establishment anger. Instead, support coalesced around Bolsonaro, who at the margins in Congress painted himself as just the strong man Brazil needed to dismantle a failing system.

Bolsonaro has promised to crack down on violent crime and drastically reduce the size of Brazil's state. But many of the details of his positions remain unclear since he has largely conducted his campaign via blasts on social media. After he was stabbed, he declined to debate Haddad and gave interviews only to largely friendly media who rarely asked tough questions.

"Tomorrow we start a new country," said Mario Marcondes, a 61-year-old pilot who gathered with other supporters outside Bolsonaro's house. "This was like a soccer game, a dispute that is over. Now we will all know to unite."