Trump says rocks thrown by migrants to be treated as ‘rifles’ 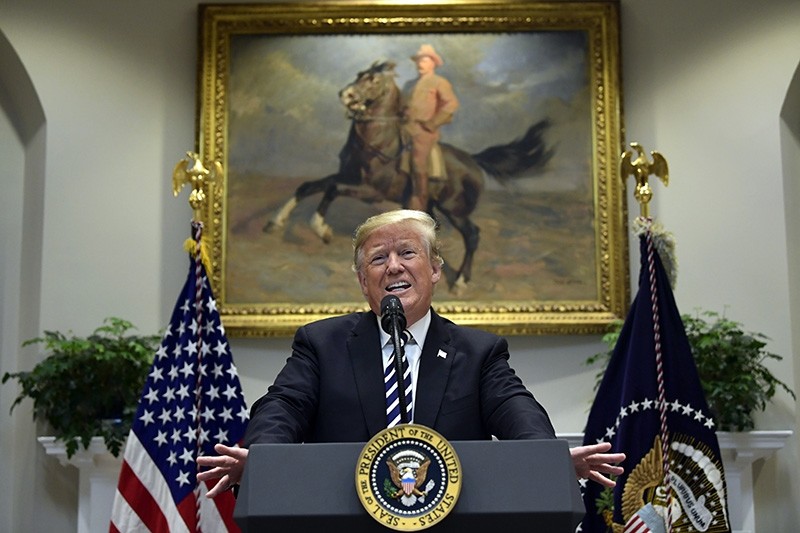 President Donald Trump talks about immigration and gives an update on border security from the Roosevelt Room of the White House in Washington, Thursday, Nov. 1, 2018. (AP Photo)
by Compiled from Wire Services Nov 02, 2018 12:00 am

U.S. President Donald Trump said Thursday he told the U.S. military mobilizing at the Southwest border that if the group of migrants traveling from Central America tries to throw rocks at them, the troops should act as though the rocks are "rifles."

In a lengthy speech on migration, Trump promised an executive order sometime next week that would ban migrants from claiming asylum if they cross the border illegally.

"Migrants seeking asylum will have to present themselves lawfully at a port of entry," Trump told reporters at the White House.

"Those who choose to break our laws and enter illegally will no longer be able to use meritless claims to gain automatic admission into our country," he added.

Under the Immigration and Nationality Act, migrants claiming asylum are allowed to do so at the border crossings, but also if they cross illegally.

Trump did not provide details on whether the plan would apply only to people traveling in the caravans or to anyone seeking to enter the country.

He said migrants are abusing the asylum system and making a "mockery" of immigration laws.

Trump reiterated that he wanted to set up "tent cities" to hold people coming to the U.S., including those seeking asylum.

But there currently is not enough detention space to hold families who are coming across the border. The military is working to create space, but nothing has been finalized. And laws prevent children from being detained beyond 20 days.

Active-duty troops began arriving at the U.S.-Mexico border on Thursday to provide support for border patrol agents as a caravan of migrants slowly makes its way north.

The troops are doing initial assessments at the port of entry in McAllen, Texas. An official who spoke on the condition of anonymity said there are about 2,600 U.S. troops now at staging bases, largely in Texas, with several thousand more expected to flow in through the weekend and move into California and Arizona.

The Pentagon says more than 7,000 active-duty troops are being sent to the Southwest border, with more possible. President Donald Trump has said the number could reach 15,000.