US polls open in critical midterm test for Trump 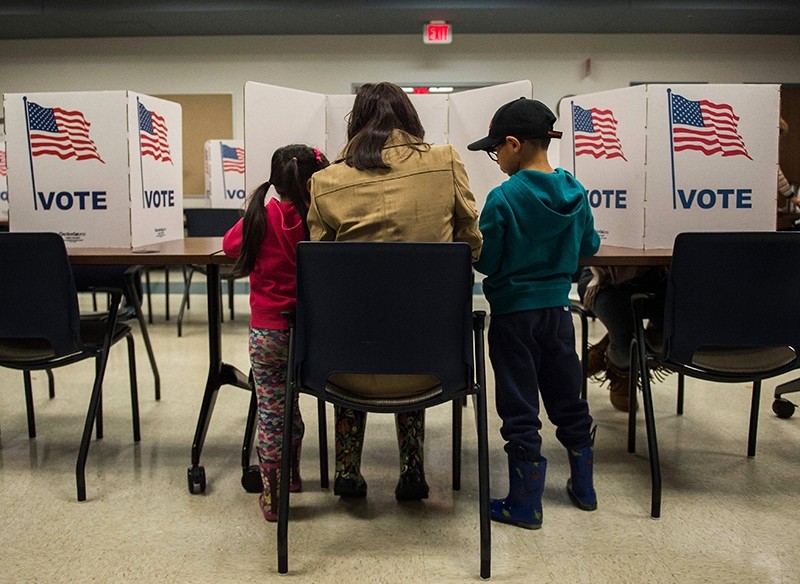 About three-quarters of the 50 states in the east and center of the country were already voting as polls began opening at 6 am (1100 GMT) for the day-long ballot.

At stake are all 435 seats in the House of Representatives, 35 seats in the 100-member Senate, 36 governor's posts and seats in state legislatures across the country.

For almost two years, Trump's rule-breaking, sometimes chaotic administration has enjoyed a largely free hand from the twin Republican-controlled chambers, but the midterms could finally see his wings clipped.

According to nearly all pollsters, the Democrats have a good chance of winning the House, while the Republicans are likely to retain the Senate.

But with turnout a key unknown factor and pollsters still unsure about the effect of Trump's maverick style on voters, both parties admit that they may be in for nasty surprises.

After a campaign in which Trump was accused of race-baiting with repeated and unsubstantiated references to an "invasion" of undocumented immigrants bent on rape and murder, left-right divisions in America could not be deeper.

Although not on the ballot, Trump made himself the focus of the entire contest, jetting around the country to hold rallies -- in three states on Monday alone. The election is widely seen as a referendum on the first two years of his term.

Trump declared "the Republican agenda is the American dream" and at his final event, in Cape Girardeau, Missouri, he called on supporters to seize their "righteous destiny as Americans."

Voters will "define the future, not just of Texas, but of this country, not just of this generation but every generation that follows," said Democrat Beto O'Rourke, who is challenging Senator Ted Cruz in traditionally deep-Republican Texas.

At every rally, Trump has vowed to his supporters that they will "win, win, win."

But as he touched down in Indiana for the second leg of his final-day tour Monday, even Trump conceded that the House may slip from his party's grasp.

"We'll just have to work a little bit differently," he told reporters when asked how he'd live with a Democrat-controlled lower chamber.

The party of a first-term president tends to lose congressional seats in off-year elections. However, a healthy economy favors the incumbent, so Trump may yet defy the historical pattern.

New figures on the eve of the polls confirmed that job growth is soaring and Trump gives himself credit for the "hottest economy on Earth."

But to the dismay of some Republicans he has often pivoted away from that message in the final week of campaigning to emphasize a hardline crackdown against undocumented immigrants.

Trump has sent thousands of soldiers to the Mexican border, suggested that migrants who throw stones at law enforcement officers should be shot, and made wild claims about the Democrats planning to turn the country into a crime-and-drugs black hole.

Stirring fear of foreigners and trumpeting American nationalism worked for the real estate billionaire in his 2016 election victory against the Democrats' establishment candidate Hillary Clinton.

But the angry tone has also turned off swaths of Americans.

Bernie Sanders, the leftist populist who some feel would have had a better chance than Clinton to take on Trump in 2016, lashed out Monday at the president, calling him a "pathological liar."

"He is a sexist, a racist, a homophobe, a xenophobe and a religious bigot. He is trying to do what we have never seen in the modern history of this country, to do what he is doing right now, to gain votes by trying to divide the American people up based on where we came from," Sanders said on SiriusXM Progress radio.

Trump's ultra-loyal white base laps up his colorful style, often cheering and chanting as he makes jaw-dropping insults against opponents and factually erroneous claims.

However, even some Republicans became jittery after a Florida man and ardent Trump supporter was charged with sending homemade bombs to more than a dozen senior Democrats and other high profile opponents of Trump.

Days later, a gunman walked into a Pittsburgh synagogue and shot 11 worshippers dead.

He had allegedly lashed out online against Jews he accused of transporting Central American "invaders" into the United States -- in language that echoed Trump's attacks on impoverished migrants coming through Mexico.