Republicans hold Senate but lose House to Democrats in US midterms 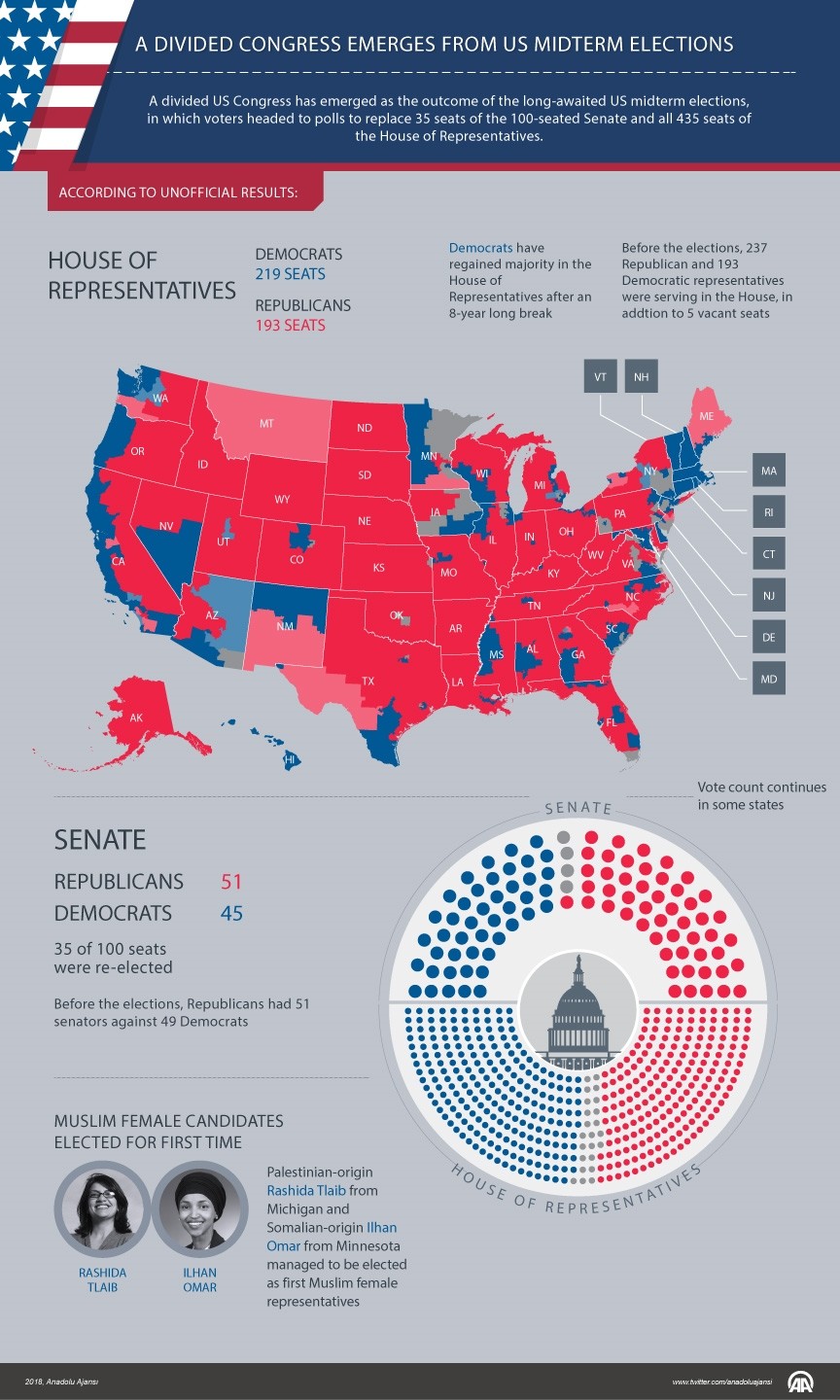 Democrats have regained control of the House from President Donald Trump's Republican Party in the midterm elections, powered by a suburban revolt that has threatened what's left of the president's governing agenda.

But the GOP added to its Senate edge and prevailed in some key races for governor Tuesday, beating back the potential of big Democratic gains across the board. The "blue wave" that some had feared from Election Day never fully materialized.

The mixed verdict in the first nationwide election of Trump's presidency showed the limits of his hard-line immigration rhetoric in America's evolving political landscape, where college-educated voters in the suburbs rejected his warnings of a migrant "invasion." But blue-collar voters and rural America embraced his aggressive talk and stances. 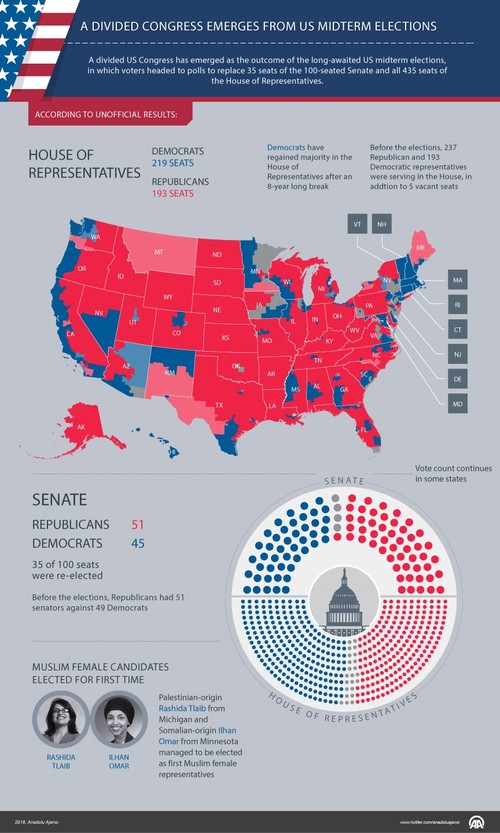 House Democratic leader Nancy Pelosi of California, who would be in line to become the next speaker, spoke of "a new day in America." Trump, in a tweet, said that "in all fairness" Pelosi "deserves" to return to her former role as speaker, despite some rumblings in her party. "She has earned this great honor!"

But the Democrats' edge is narrow. With 218 seats needed for a majority in the 435-member Houses, Democrats have won 220 and the Republicans 193, with winners undetermined in 22 races.

Trump was expected to address the results at a postelection news conference scheduled for midday Wednesday.

The president's party will maintain control of the executive branch of the government, in addition to the Senate. But Democrats suddenly have a foothold that gives them subpoena power to probe deep into Trump's personal and professional missteps — and his long-withheld tax returns.

"If the Democrats think they are going to waste Taxpayer Money investigating us at the House level," Trump tweeted, "then we will likewise be forced to consider investigating them for all of the leaks of Classified Information, and much else, at the Senate level. Two can play that game!" It wasn't clear what "leaks" he was referring to.

It could have been a much bigger night for Democrats, who suffered stinging losses in Ohio and in Florida, where Trump-backed Republican Ron DeSantis ended Democrat Andrew Gillum's bid to become the state's first African-American governor.

The elections also exposed an extraordinary political realignment in an electorate defined by race, gender, and education that could shape U.S. politics for years to come.

Record diversity on the ballot may have helped drive turnout.

Voters were on track to send at least 99 women to the House, shattering the record of 84 now. The House was also getting its first two Muslim women, Massachusetts elected its first black congresswoman, and Tennessee got its first female senator.

Three candidates had hoped to become their states' first African-American governors, although just one — Georgia Democrat Stacey Abrams — was still in the running.

Overall, women voted considerably more in favor of congressional Democratic candidates — with fewer than 4 in 10 voting for Republicans, according to VoteCast, a nationwide survey of more than 115,000 voters and about 20,000 nonvoters — conducted for The Associated Press by NORC at the University of Chicago.

In suburban areas where key House races were decided, female voters skewed significantly toward Democrats by a nearly 10-point margin.

Democrats celebrated a handful of victories in their "blue wall" Midwestern states, electing or re-electing governors in Michigan, Pennsylvania, Minnesota and in Wisconsin, where Scott Walker was defeated by the state's education chief, Tony Evers.

The road to a House majority ran through two dozen suburban districts that Hillary Clinton won in 2016. Democrats flipped seats in suburban districts outside of Washington, Philadelphia, Miami, Chicago and Denver. Democrats also reclaimed a handful of blue-collar districts carried by both former President Barack Obama and Trump.

The results were more mixed deeper into Trump country.

In Kansas, Democrat Sharice Davids beat a GOP incumbent to become the first gay Native American woman elected to the House. But in Kentucky, one of the top Democratic recruits, retired Marine fighter pilot Amy McGrath, lost her bid to oust to three-term Rep. Andy Barr.

Trump sought to take credit for retaining the GOP's Senate majority, even as the party lost control of the House. In a tweet Wednesday, he referred to the election results as a "Big Victory."

History was working against the president in both the House and the Senate. A president's party has traditionally suffered deep losses in his first midterm election, and 2002 was the only midterm election in the past three decades when the party holding the White House gained Senate seats.

Some hurt worse than others.

In Texas, Sen Ted Cruz staved off a tough challenge from Democrat Beto O'Rourke, whose record-smashing fundraising and celebrity have set off buzz he could be a credible 2020 White House contender.

Nearly 40 percent of voters cast their ballots to express opposition to the president, according to VoteCast, while one-in-four said they voted to express support for Trump.

Overall, 6 in 10 voters said the country was headed in the wrong direction, but roughly that same number described the national economy as excellent or good. Twenty-five percent described health care and immigration as the most important issues in the election.

Nearly two-thirds said Trump was a reason for their vote.

The president bet big on a xenophobic closing message, warning of an immigrant "invasion" that promised to spread violent crime and drugs across the nation. Several television networks, including the president's favorite, Fox News Channel, yanked a Trump campaign advertisement off the air on the eve of the election, determining that its portrayal of a murderous immigrant went too far.

One of Trump's most vocal defenders on immigration, Kansas Secretary of State Kris Kobach, lost his bid for governor.

Kobach had built a national profile as an advocate of tough immigration policies and strict voter photo ID laws. He served as vice chairman of Trump's now-defunct commission on voter fraud.

The president found partial success despite his current job approval, set at 40 percent by Gallup, the lowest at this point of any first-term president in the modern era. Both Barack Obama's and Bill Clinton's numbers were 5 percentage points higher, and both suffered major midterm losses of 63 and 54 House seats, respectively.