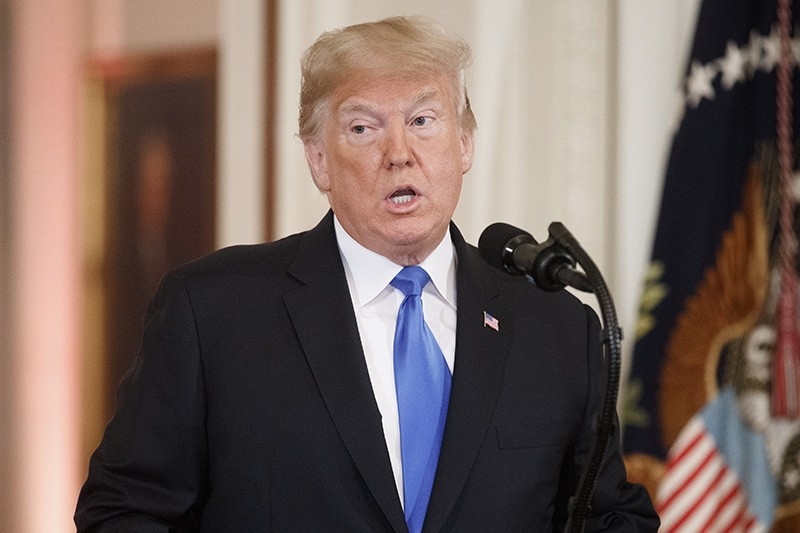 President Donald Trump, emboldened by Republican election wins in the Senate and scornful of GOP candidates he felt didn't sufficiently embrace his support, delivered a stark warning to the new Democratic House majority on Wednesday: Investigate me, and I'll investigate you — and the government will grind to a halt.

"If that happens, we will do the same thing and government comes to a halt and I'll blame them," Trump told reporters.

Speaking at a wide-ranging White House press conference, Trump, by turns combative and conciliatory, said Democrats and Republicans should set aside partisanship to work together.

Some House Democrats have threatened to use the subpoena power they will gain in January to investigate Trump and administration actions. But, he warned, he will respond in kind and government will suffer.

Plus, he said, Democrats have "nothing, zero," on him.

Of the special counsel's Russia investigation that has shadowed his administration for more than 18 months, Trump said, "I could end it right now" but "I let it go on."

Trump sparred with reporters at the post-election news conference, ordering several to sit down and telling CNN's Jim Acosta he was a "rude, terrible" person and "enemy of the people." He told yet another reporter he was "not a fan of yours, either."

Trump, CNN's Acosta engage in heated exchange as the president says the journalist is a "terrible person, enemy of the people" and tells him to drop the mic at White House press conferencehttps://t.co/8uDVA4m1tF pic.twitter.com/6GdYrNmg9L

The president criticized Republican candidates who apparently did not support him enough and lost congressional seats in Tuesday's elections.

Rep. Mike Coffman in Colorado blames his loss on resentment toward Trump in his Denver-area district. The president responded: "Too bad, Mike."

As for Utah Rep. Mia Love's loss Tuesday, Trump said: "Mia Love gave me no love, and she lost," adding, "Sorry about that, Mia."

Trump says his vigorous campaigning stopped a so-called "blue wave," ''if there ever was such a thing."

He expressed hopes for bipartisanship in the Congress, specifically in regard to his long-promised border wall with Mexico.

Trump also said he hopes he can work with Congress to get enough money to build the wall but that he would not necessarily force a government shutdown over the issue.

Trump said there would be some changes in top administration jobs, though "nothing monumental."

Trump said he is "looking at different people for different positions," adding that "it is very common after the midterms."

Trump has long been frustrated with Sessions over his recusal from the Russia investigation. Rosenstein's future appeared uncertain after reports that he discussed secretly recording Trump.

Trump praised Interior Secretary Ryan Zinke, who has come under scrutiny for his use of a security detail, chartered flights and a real estate deal, but seemed to leave open the possibility of replacing him.

"We're looking at that, and I do want to study whatever is being said. I think he's doing an excellent job but we will take a look at that in a very strong – and we'll probably have an idea about that in about a week," Trump told reporters.

He also announced that he that Vice President Mike Pence would be his running mate again in the 2020 elections.

Trump said he hadn't asked Pence yet but then turned to the vice president and said: "Mike, will you be my running mate? Will you?"

Pence acknowledged that he would.

In regard to the case of murdered Saudi journalist Jamal Khashoggi, Trump said: "I'll have a much stronger opinion on that subject over the next week." He said he is working with Congress, Turkey and Saudi Arabia on solving the killing, which took place in Istanbul.