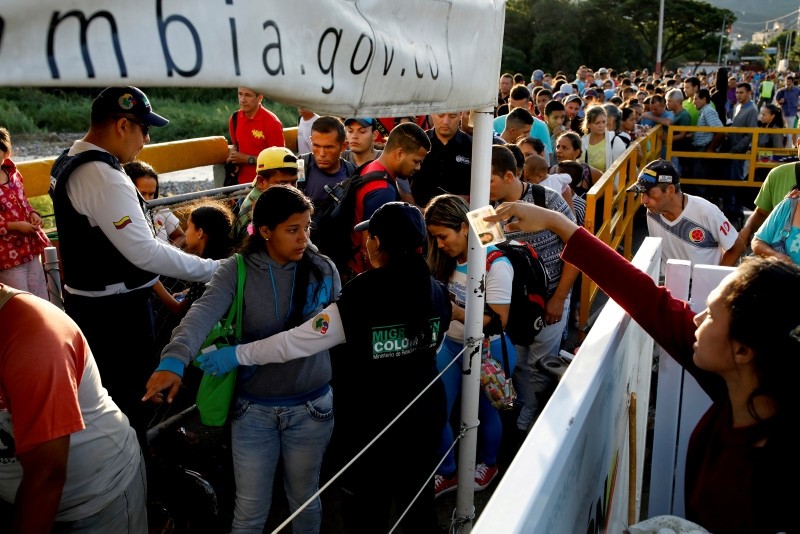 Colombian migration officers check the identity documents of people trying to enter Colombia from Venezuela, at the Simon Bolivar International bridge in Villa del Rosario, Colombia August 25, 2018. (Reuters Photo)
by Associated Press Nov 08, 2018 12:00 am
The number of refugees and migrants from Venezuela has risen to 3 million worldwide, the United Nations said Thursday.

The U.N. refugee agency and the U.N. migration agency said 2.4 million Venezuelan refugees and migrants are in Latin America and the Caribbean and the rest are in other regions.

Citing data from national immigration authorities and other sources, the agencies said Colombia has the highest number of refugees and migrants from Venezuela, with over 1 million. Peru is next with over 500,000. Ecuador has over 220,000, Argentina 130,000, Chile over 100,000, Panama 94,000, and Brazil 85,000, the U.N. High Commissioner for Refugees and the International Organization for Migration said.

Eduardo Stein, joint special representative for the two agencies on the Venezuelan issue, said, "Countries in Latin America and the Caribbean have largely maintained a commendable open door policy to refugees and migrants from Venezuela."

But he warned that "their reception capacity is severely strained, requiring a more robust and immediate response from the international community if this generosity and solidarity are to continue."

Governments from the region met in Ecuador in September and are scheduled to hold a second meeting Nov. 22-23.

Most migrants say they are fleeing Venezuela's imploding economy. Venezuela was once among Latin America's most prosperous nations, and it has the world's largest proven oil reserves, but a fall in oil prices and domestic woes have created economic and political crisis. Inflation this year could top 1 million percent, according to economists at the International Monetary Fund.