Death toll rises to 42 in California's deadliest fire in history 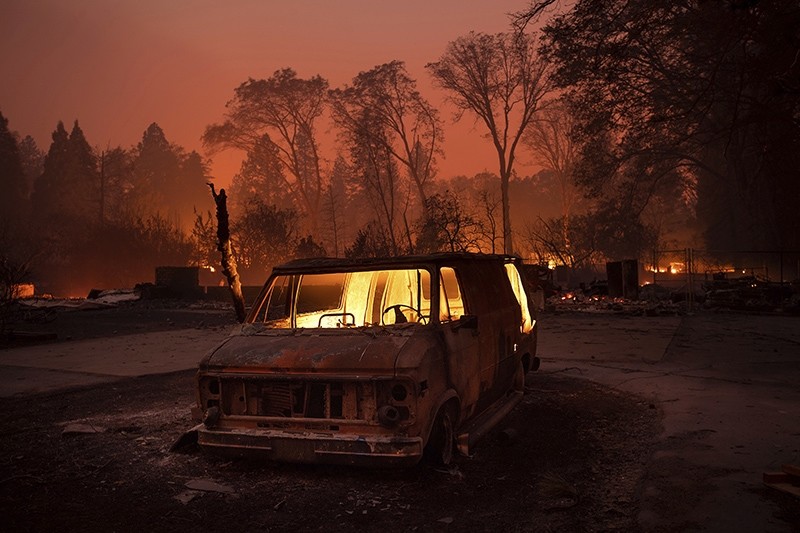 The death toll from a huge blaze in Northern California rose to 42 on Monday, making it the deadliest wildfire in state history, as two more deaths have been reported in fires in the southern part of the state.

Thousands of firefighters spent a fifth day digging battle lines to contain the "Camp Fire" in the foothills of the Sierra Nevada mountains north of Sacramento, while search teams were on a grim mission to recover the dead.

"As of today, an additional 13 human remains have been recovered, which brings the total number to 42," Sheriff Kory Honea told a news conference.

The blaze is "the deadliest wildland fire in California history," Honea said.

Although it is difficult to be certain due to inconsistencies in record keeping and categorization, the Camp Fire appears to deadliest American wildfire in a century -- since the Cloquet Fire killed an estimated 1,000 people in Minnesota in 1918. 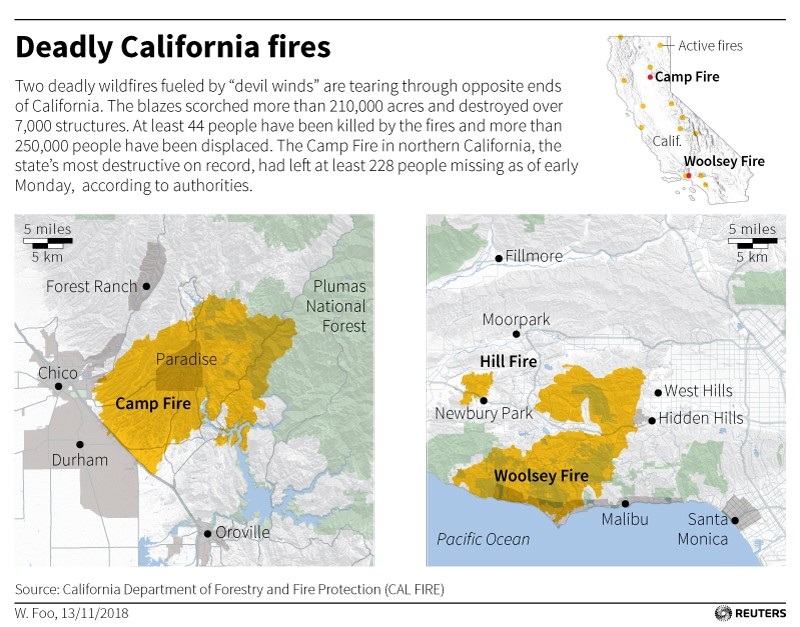 The Camp Fire is the largest of several infernos that have sent a quarter of a million people fleeing their homes across the tinder-dry state, with winds of up to 60 miles (100 kilometers) per hour fanning the fast-moving flames.

In addition to the historic loss of life, the Camp Fire blaze is also more destructive than any other on record, having razed 6,500 homes in the town of Paradise, effectively wiping it off the map.

More than 5,100 firefighters from as far as the states of Washington and Texas have been working to halt the advance of the inferno as "mass casualty" search teams backed by anthropologists and a DNA lab pick through the charred ruins to identify remains -- sometimes reduced to no more than shards of bone.

"We're now at a point where we're going to bring in human remains detector dogs, or what often are referred to as cadaver dogs," Honea said Monday.

At least 44 people have died in fire zones in Northern and Southern California, where acrid smoke has blanketed the sky for miles, the sun barely visible.

U.S. President Donald Trump "declared that a major disaster exists in the state of California and ordered federal aid to supplement state, tribal, and local recovery efforts in the areas affected by wildfires," the White House said in a statement.

On the ground, cars caught in the flames have been reduced to scorched metal skeletons, while piles of debris smolder where houses once stood, an occasional brick wall or chimney remaining.

Glenn Simmons, 64, told AFP in the nearby town of Chico that he had been sleeping in his car since Thursday, unable to find a space in a shelter.

"I was planning on maybe moving out of state, or into southern California... Everything is burned up. I have my clothes and I have a backpack, and that's pretty much it," he said.

The Camp Fire has reduced around 17 square miles (45 square kilometers) of Butte County's forested hills mostly to charred wasteland -- an area which hasn't seen rainfall of more than half an inch (one centimeter) in more than 30 weeks.

It is currently 25 percent contained, the California Department of Forestry and Fire Protection (Cal Fire) said.

Three firefighters have been injured in the effort to quell the blaze's advance.

At the southern end of the state, another three firefighters have been injured battling the Woolsey Fire, which has devoured mansions and mobile homes alike in the coastal celebrity resort of Malibu.

The blaze is similar in size to the Camp Fire but has been much less destructive, and the death toll has been limited to two victims found in a vehicle on a private driveway.

While some Malibu-area residents were allowed to return home late Sunday, the city of Calabasas, just northeast of coastal Malibu, came under evacuation orders.

"This is not the new normal, this is the new abnormal. And this new abnormal will continue, certainly in the next 10 to 15 to 20 years," California Governor Jerry Brown said Sunday in a stark warning over the likely damaging effects of climate change.

"Unfortunately, the best science is telling us that the dryness, warmth, drought, all those things, they're going to intensify."

Over the weekend, the Woolsey Fire engulfed parts of Thousand Oaks, where the community is still shell-shocked after a Marine Corps veteran shot dead 12 people in a country music bar on Wednesday.

The blaze has consumed around 93,000 acres (37,600 hectares), destroyed an estimated 370 structures and was 30 percent contained, according to Cal Fire.

Turkey's Foreign Ministry on Monday extended condolences to the U.S. over the rising death toll.

"We are saddened by the loss of many lives and great material losses caused by wildfires in the State of California, U.S.," the ministry said in a written statement.

"We extend our condolences to the relatives of those who lost their lives and to the people of the United States and wish a speedy recovery to the injured," the statement added.