Trump visits scorched California as death toll in wildfire climbs to 76 with 1,276 missing 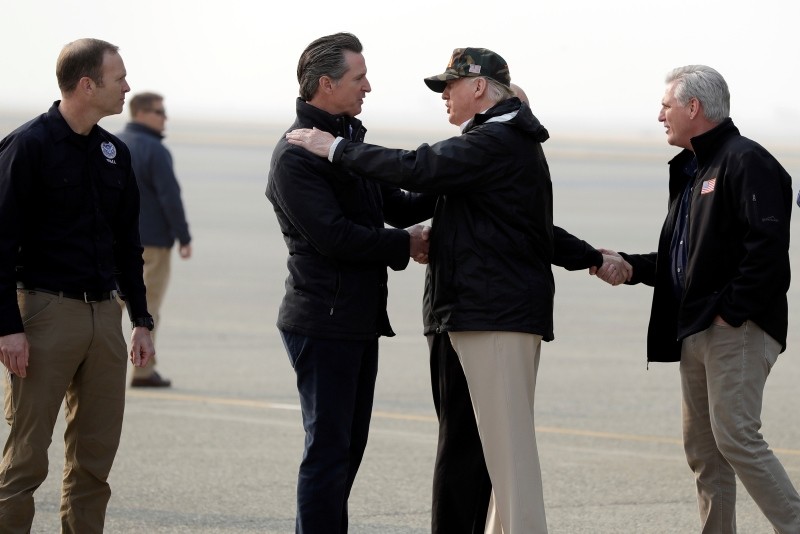 President Donald Trump greets California Gov.-elect Gavin Newsom as he arrives on Air Force One at Beale Air Force Base for a visit to areas impacted by the wildfires, Saturday, Nov. 17, 2018. (AP Photo)
by Associated Press Nov 17, 2018 12:00 am
President Donald Trump took a helicopter tour Saturday over the Northern California landscape scorched by a killer wildfire. A full cover of haze and the smell of smoke greeted the president upon his arrival at an Air Force base, as did the governor and his successor.

Trump planned to hear from those leaders about the dire situation and talk with first responders, and later was expected to travel several hundred miles south to visit with victims of a recent country music bar shooting.

"Look forward to being with our brave Firefighters, First Responders and @FEMA, along with the many brave People of California. We are with you all the way - God Bless you all!" Trump tweeted while heading west on Air Force One.

Landing at Beale Air Force Base, he was greeted by Gov. Jerry Brown and Gov.-elect Gavin Newsom, both Democrats. Trump boarded Marine One without making public remarks.

"I think that the biggest message and the biggest takeover will be the president saying, 'We're here,' and thankfully the president's got big shoulders, and I think he's going to go there to offer them up to people that need somebody to lean on," White House press secretary Sarah Huckabee Sanders said on Friday on the Fox News Channel.

The president, who left Washington early Saturday and didn't expect to return to the White House until well past midnight, planned to get a firsthand look at the devastation from the wildfire that has destroyed the town of Paradise and heavily damaged the outlying community of Magalia. At least 76 people have died, and authorities are trying to locate more than 1,000 people, though not all are believed missing. More than 5,500 fire personnel were battling the blaze that covered 228 square miles (590 square kilometers) and was about 50 percent contained, officials said.

Trump also was expected to stop in Southern California, where a gunman killed a dozen people at the Borderline Bar & Grill in Thousand Oaks on Nov. 7 before committing suicide.

The White House schedule said Air Force One was to land at Beale Air Force Base near Sacramento about 12:45 p.m. EST but listed no specific events until his early Sunday return to Washington.

Trump told reporters at the White House before he left on the trip that "we're making two stops." Sanders, in the Fox News Channel interview with her father, former Arkansas Gov. Mike Huckabee, who was filling in for Sean Hannity, spoke of plans for viewing "the scenes of the horrific wildfires that have ravaged California but also talking with some of the people and the families that were impacted by the shooting there not too long ago."

Trump long has struggled to convey empathy to victims of national disasters and tragedies. His first reaction to the fires came in a tweet last week: "There is no reason for these massive, deadly and costly forest fires in California except that forest management is so poor. Billions of dollars are given each year, with so many lives lost, all because of gross mismanagement of the forests."

Nature and humans share blame for the wildfires, but forest management did not play a major role, despite Trump's claims, fire scientists say. Nature provides the dangerous winds that have whipped the fires, and human-caused climate change over the long haul is killing and drying the shrubs and trees that provide the fuel.

He stuck to that theme in his remarks just before departing on Saturday when he outlined what he planned to discuss with Brown and Newsom: "We will be talking about forest management. ... The one thing is that everybody now knows that this is what we have to be doing and there's no question about it. It should have been done many years ago, but I think everybody's on the right side."

Trump, who has long feuded with the political leaders of heavily Democratic California over issues such as immigration and voting, also has threatened to withhold federal payments to the state. After being criticized for his response, Trump has shifted gears, expressing words of encouragement to first responders and those of sympathy for hit victims.

"It seems that many more people are missing than anyone thought even possible," Trump told reporters in Washington, saying he looked forward to meeting fire responders and firefighters who have been "incredibly brave."

But when he was asked by Fox News in an interview set to air Sunday whether climate change played a role in the number of serious fires, he said "maybe it contributes a little bit. The big problem we have is management." He added that he was surprised to see images of firefighters removing dried brush near a fire. "This should have been all raked out."

Brown and Newsom said Friday they welcomed the president's visit, and "now is a time to pull together for the people of California."