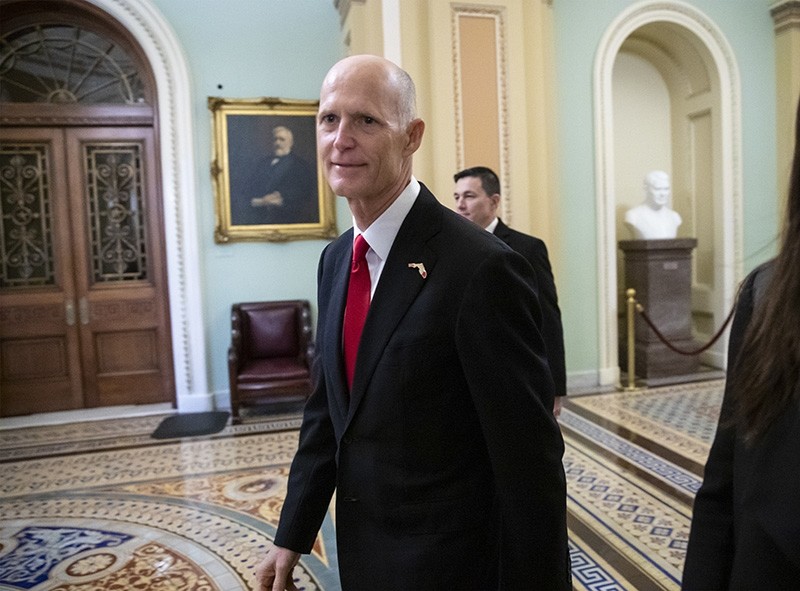 In this Wednesday, Nov. 14, 2018, file photo Florida Gov. Rick Scott arrives for a meeting with Majority Leader Mitch McConnell, R-Ky., and new GOP senators at the Capitol in Washington. (AP Photo)
by Daily Sabah with Agencies Nov 18, 2018 12:00 am

In the recount of the ballots cast for the Nov. 6 election, Scott won by 10,033 votes, Florida elections officials said Sunday. Scott took 50.05 percent of the 8.19 million votes cast statewide, compared with 49.93 percent for Nelson, the officials added.

President Donald Trump congratulated Scott on a "courageous and successful campaign" in a tweet.

The defeat ends Nelson's lengthy political career. The three-term incumbent was first elected to the U.S. Senate in 2000. Before that he served six terms in the U.S. House and as state treasurer and insurance commissioner for six years.

The battle between Nelson and Scott and the race to replace Scott as governor both were closely watched contests in which Democrats had hoped to topple Republicans. On Saturday, Democrat Andrew Gillum conceded to Republican rival Ron DeSantis, an ally of Trump, in the governor's race, which also went to a recount.

The state is often described as "purple," meaning it can be a toss-up between "red" Republicans and "blue" Democrats. In 2000, the presidential race came down to just hundreds of votes in Florida, with George W. Bush ultimately declared the winner.

Meanwhile, in California, Democrat Gil Cisneros captured a Republican-held U.S. House seat, capping a Democratic rout in which the party picked up six congressional seats in the state.

The Cisneros victory Saturday cements a stunning political realignment that will leave a vast stretch of the Los Angeles metropolitan area under Democratic control in the House.

With Cisneros' victory over Republican Young Kim, four Republican-held House districts all or partly in Orange County, once a nationally known GOP stronghold, will have shifted in one election to the Democratic column. The change means that the county — Richard Nixon's birthplace and site of his presidential library — will only have Democrats representing its residents in Washington next year.

The Orange County Democratic Party said it's the first time since 1940 that all seven House seats in the county, home to 3.2 million people, are in Democratic control. Three seats all or partly in the northwestern end of the county are held by Democrats who were easily re-elected.

Republicans also lost a seat in the agricultural Central Valley.

With other gains, Democrats will hold a 45-8 edge in California U.S. House seats next year.

While the election delivered mixed results around the U.S., it affirmed California's reputation as a Democratic fortress.

Democrats are on track to hold every statewide office — again. The party holds a supermajority in both chambers of the Legislature and has a 3.7-million advantage in voter registration.

There wasn't even a Republican on the ballot for U.S. Senate.