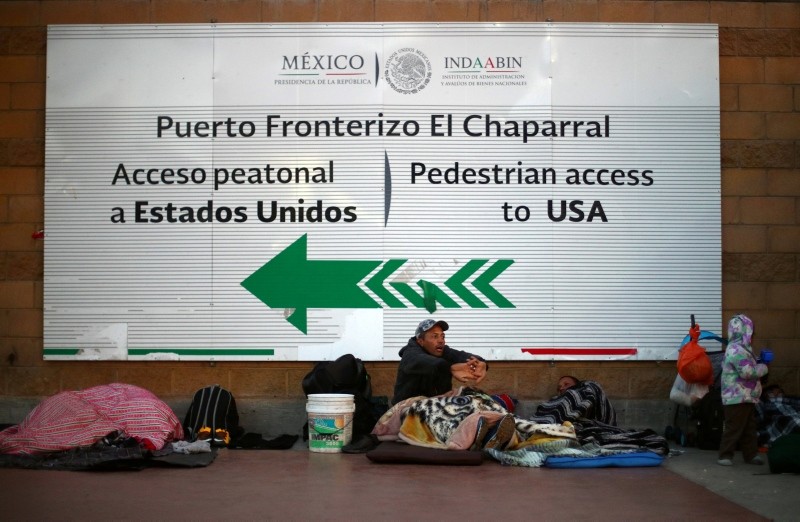 Migrants, part of a caravan of thousands from Central America trying to reach the United States, rest as they wait at the El Chaparral port in Tijuana, Mexico, November 23, 2018. (Reuters Photo)
by Compiled from Wire Services Nov 24, 2018 12:00 am

Mexico's incoming government says it does not plan to assume the role of "safe third country" for migrants seeking asylum in the U.S. after Andres Manuel Lopez Obrador is sworn in as president on Dec. 1.

Incoming Interior Minister Olga Sanchez says in a statement Saturday: "There is no agreement of any sort between the incoming Mexican government and the U.S. government."

She said the future government's principal concern related to the migrants is their well-being in Mexico.

The Washington Post reported Saturday that the administration of U.S. President Donald Trump has won support from the president-elect's team for asylum seekers to wait in Mexico while their claims move through U.S. courts.

Lopez Obrador has vowed to try to eliminate the causes of migration by creating more jobs and improving living conditions in Mexico and Central America.

In exchange, he hopes U.S. President Donald Trump and the Canadian government will agree to help spur economic development in the region.

Outgoing President Enrique Pena Nieto has also sought to stem the flow of migrants north by offering jobs to them, and has received backing from the private sector in his efforts.

"The medium- and long-term solution is that people don't migrate," Sanchez Cordero said. "Mexico has open arms and everything, but imagine, one caravan after another after another, that would also be a problem for us."

The paper said that according to the outlines of the plan, asylum applicants at the border will have to stay in Mexico while their cases are processed, potentially ending the system Trump decries as "catch and release" that has until now generally allowed those seeking refuge to wait on safer U.S. soil.

The effect, Parker said, would likely "push people fleeing for lives into riskier attempts to find safety, including using criminal human smugglers who will gain power under this new policy."

There was no immediate comment from the White House on the deal that the Washington Post said took shape last week in Houston during a meeting between Marcelo Ebrard, Mexico's incoming foreign minister, and top U.S. officials including Secretary of State Mike Pompeo and Homeland Security Secretary Kirstjen Nielsen.

Trump has been seeking to block thousands of Central Americans traveling in caravans from entering the United States, and has ordered that immigrants who enter the country illegally from Mexico are ineligible for asylum.

That order has been temporary suspended by a U.S. judge.