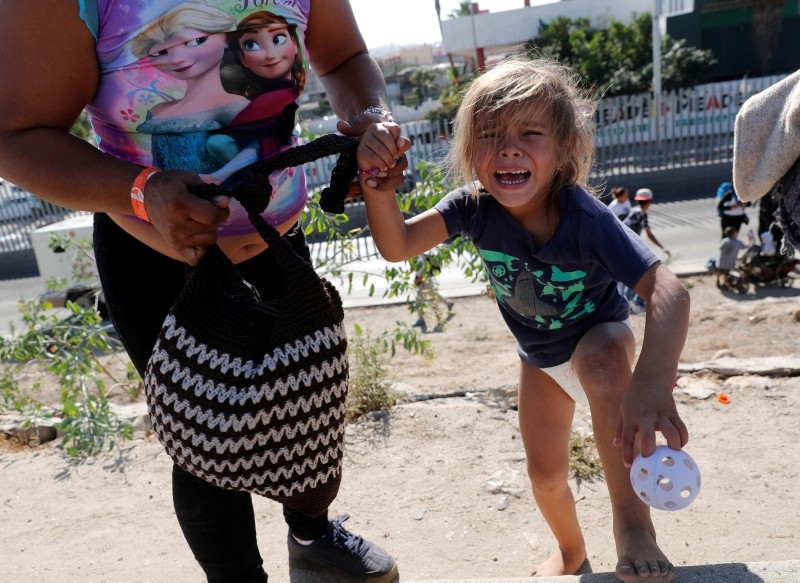 Hundreds of Central American migrants who tried to force through a Mexican police blockade into the United States retreated to a nearby camp Monday after U.S. border agents pushed them back with tear gas and rubber bullets.

The group of around 500, part of a caravan of around 5,000 mainly Hondurans who have been trekking towards the U.S. for weeks, scrambled over a rusted metal fence and raced into a concrete riverbed towards San Diego on Sunday.

They were stopped by a chain-link fence topped with barbed wire and repelled by U.S. Border Patrol agents throwing tear gas shells and firing rubber bullets, an AFP journalist on the scene saw.

Chief Patrol Agent Rodney Scott, of the San Diego Sector Border Patrol, told CNN "numerous" migrants -- mainly men -- had made it across, however, and 42 of them were arrested.

The incident was latest flash point in a weeks-long crisis that Donald Trump used to drum up support in this month's midterm elections and the president hit out again on Monday by threatening a permanent shutdown of the frontier.

Most of the migrants stumbled back into camp in the northwestern Mexican city of Tijuana, dirty, scared and with ripped clothes.

"We're here with broken hearts and hopes," said Andy Colon, a 20-year-old woman who traveled from Honduras with her sister and two children.

"We were deluded into believing that we had already reached the United States, and that they would grant us asylum," Colon told AFP.

The San Ysidro border post across from Tijuana -- the busiest crossing on the U.S.-Mexico border -- was closed to traffic and pedestrians for several hours following the incident.

Trump, who for weeks has been condemning the migrant caravan, took to Twitter to lash out once more on Monday.

"Mexico should move the flag waving migrants, many of whom are stone cold criminals, back to their countries," he wrote.

"Do it by plane, do it by bus, do it anyway you want, but they are NOT coming into the U.S.A. We will close the border permanently if need be. Congress, fund the WALL!" Trump said, referring to his central election pledge to build a wall across the US-Mexico border.

Many of the migrants say they are fleeing violence and poverty in Honduras in search of asylum north of the border.

Mexican police in Tijuana arrested 98 mostly Hondurans who tried to cross over on Sunday, and a local police commander said "zero tolerance" would be applied.

Mexican Interior Minister Alfonso Navarrete accused some of attempting to cross from Tijuana in a "violent way," and said they would be deported.

"Far from helping the caravan, they are hurting it," he told the Milenio television network.

Video clips posted on Twitter showed crowds of people dashing across a shallow concrete riverbed toward the United States.

The sudden rush overwhelmed the outnumbered Mexican police, who were deployed with full riot gear.

US Homeland Security Secretary Kirstjen Nielsen accused the migrants of seeking to harm US border patrol personnel "by throwing projectiles at them."

Around 1,000 migrants, including women and young children, had been holding a peaceful midday demonstration in Tijuana when half of the group bolted toward the border.

Several hundred made it over the first barrier and cascaded into the riverbed.

"Are we in the United States yet?" some asked in desperate tones. 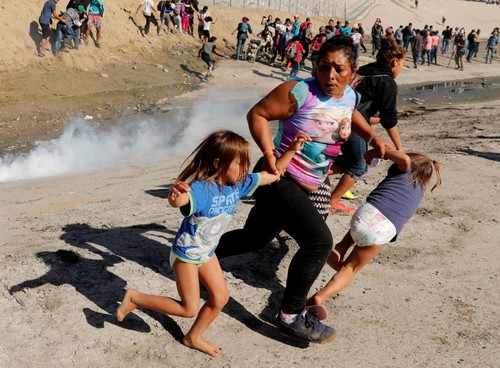 But when they neared the second fence U.S. border agents fired tear gas and rubber bullets at them as helicopters buzzed overhead, an AFP journalist saw.

The migrants covered their faces to protect themselves from the acrid gas. Mothers clutched their young children and fled back to Mexico for safety.

"We were told that if we crossed (the first barrier) they would give us asylum, because we were already in the United States," said Flor Jimenez, a 32-year-old Honduran woman.

"But now it seems that they want to kill us, and we got very scared," said Jimenez.

She managed to reach the second border fence with her husband, her sister and her young daughter.

But amid the clouds of gas, the crowd, including Jimenez and her relatives, turned back to Tijuana.

In a statement, the Honduran government "condemned" the use of rubber bullets and reiterated a request for United Nations assistance for migrants stranded on Mexico's northern border.

Trump has deployed nearly 6,000 troops, on top of more than 2,000 National Guardsmen sent earlier, but Scott said the Department of Defense is only providing logistical support and was not involved in Sunday's engagement.

Approximately 5,000 migrants have reached Tijuana over the past week, after a trip of up to 2,500 miles (4,000 kilometers) covered in just over a month.

To enter the US legally, migrants must apply for asylum, but the wait for those requests to be processed can last up to a year.

The Washington Post reported Saturday that the Trump administration had gained the support of Mexico's incoming government for a plan to require asylum seekers to wait in Mexico for their applications to be processed.

But officials in the incoming administration of President-elect Andres Manuel Lopez Obrador later said the agreement was not yet final.