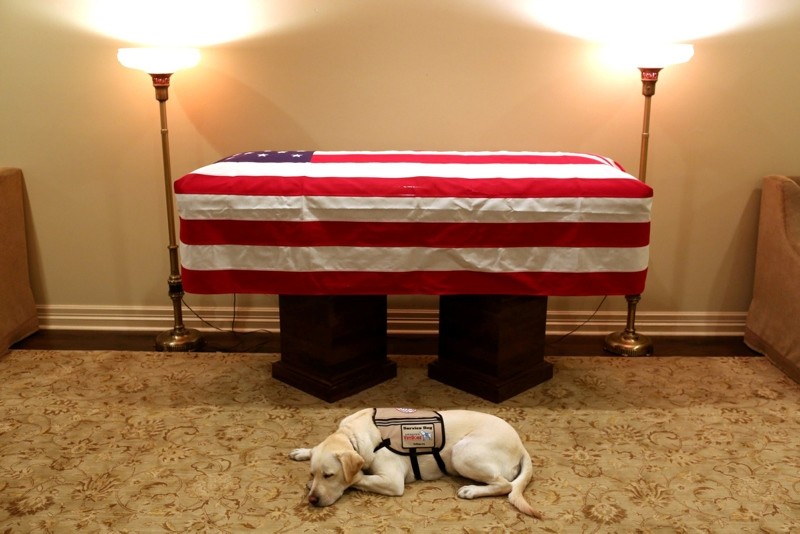 A U.S. president is believed to have said the easiest way to find a friend in Washington was to get a dog. On Monday, George H.W. Bush's faithful service dog Sully made a final journey back to the U.S. capital with the late president.

Two days after Bush's death at age 94, family spokesman Jim McGrath posted a touching photograph Monday of the yellow Labrador retriever lying down in front of Bush's casket, with the accompanying phrase "Mission Complete" and the hashtag #Remembering41.

The two-year-old Sully has been at Bush's side since June, just weeks after the death of the president's wife Barbara, to whom he was married for 73 years.

"As much as our family is going to miss this dog, we're comforted to know he'll bring the same joy to his new home, Walter Reed, that he brought to 41," the younger Bush wrote. His post has received a quarter million likes.

Historians believe Harry S. Truman's folksy aphorism about friends in Washington and dogs is probably apocryphal — the 33rd U.S. president didn't actually like dogs — but he would surely have fallen for Sully's charms.

The four-legged friend is already something of an online star. Sully's own Instagram account describes the dog as "a kinder, gentler Labrador," a play on Bush's words in his 1988 acceptance speech, when he called for "a kinder and gentler nation."