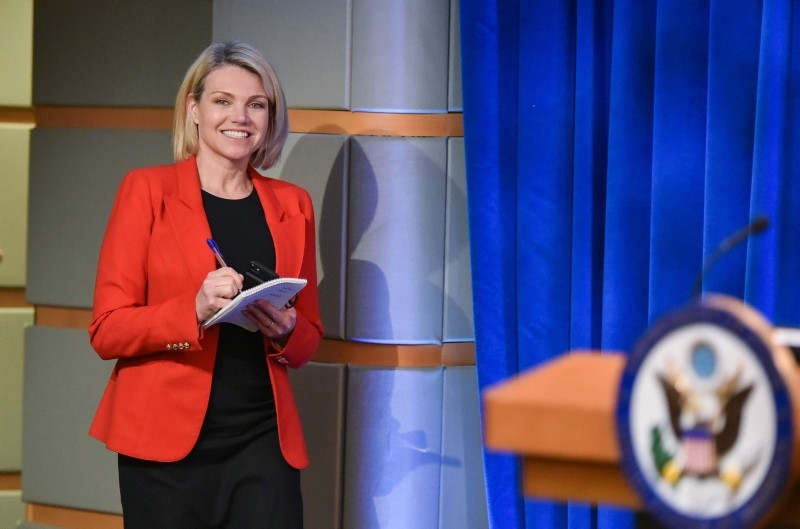 In this file photo taken on May 29, 2018, US State Department spokesperson Heather Nauert arrives for the release of the 2017 Annual Report on International Religious Freedom at the US Department of State in Washington, DC. (AFP Photo)
by Associated Press Dec 07, 2018 12:00 am

"Heather Nauert will be nominated," Trump said Friday before departing the White House on Marine One for an event in Kansas City. "She's very talented, very smart, very quick, and I think she's going to be respected by all."

If she is confirmed by the Senate, Nauert, a former Fox News Channel reporter who had little foreign policy experience before becoming State Department spokeswoman, will replace Nikki Haley. Haley, a former South Carolina governor, announced in October that she would step down at the end of this year. Nauert would be a leading administration voice on Trump's foreign policy.

Trump told reporters last month that Nauert was "excellent," adding, "She's been a supporter for a long time."

Plucked from Fox by the White House to serve as State Department spokeswoman, Nauert catapulted into the upper echelons of the agency's hierarchy when Secretary of State Rex Tillerson was fired in March and replaced with Mike Pompeo. Nauert was then appointed acting undersecretary of state for public diplomacy and public affairs and was for a time the highest-ranking woman and fourth highest-ranking official in the building.

Nauert, who did not have a good relationship with Tillerson and had considered leaving the department, told associates at the time she was taken aback by the promotion offer and recommended a colleague for the job. But when White House officials told her they wanted her, she accepted.

That role gave her responsibilities far beyond the news conferences she held in the State Department briefing room. She oversaw public diplomacy in Washington and all of the roughly 275 overseas U.S. embassies, consulates and other posts. She was in charge of the Global Engagement Center that fights extremist messaging from the Islamic State group and others, and she has a seat on the U.S. Agency for Global Media that oversees government broadcast networks such as Voice of America.

Just 18 months ago, she wasn't even in government.

Nauert was a breaking news anchor on Trump's favorite television show, "Fox & Friends," when she was tapped to be the face and voice of the administration's foreign policy. With a master's degree from Columbia University's Graduate School of Journalism, she had moved to Fox from ABC News, where she was a general assignment reporter. She hadn't specialized in foreign policy or international relations.

Shut out from the top by Tillerson and his inner circle, Nauert developed relationships with career diplomats. Barred from traveling with Tillerson, she embarked on her own overseas trips, visiting Bangladesh and Myanmar last year to see the plight of Rohingya Muslims, and then Israel after a planned stop in Syria was scrapped. All the while, she stayed in the good graces of the White House, even as Tillerson was increasingly on the outs.

White House press secretary Sarah Huckabee Sanders described Nauert in March as "a team player" and "a strong asset for the administration."