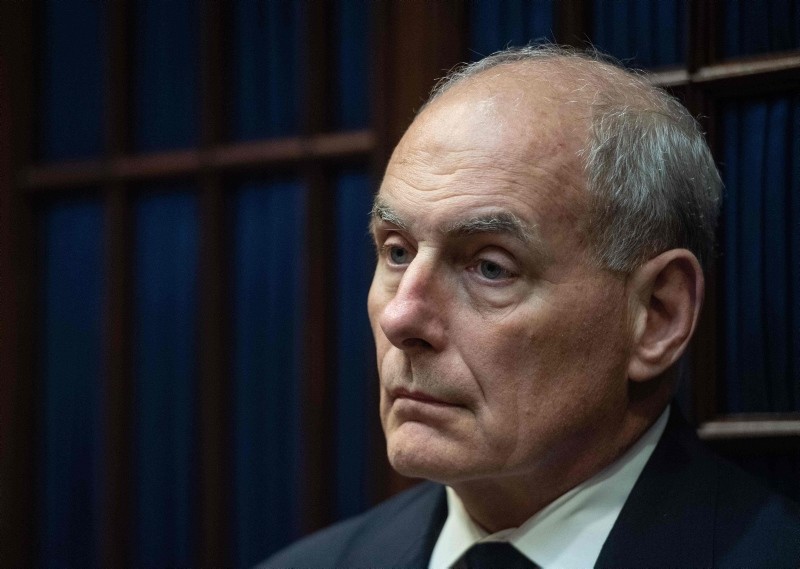 U.S. President Donald Trump on Saturday announced his chief of staff John Kelly would be leaving the administration at the end of the year -- the latest in a series of moves by the Republican leader to change his inner circle of aides.

Kelly, a retired Marine Corps general, was long rumored to be on the way out, amid reports that his relationship with the volatile Trump had deteriorated to such an extent they were no longer on speaking terms.

"John Kelly will be leaving at the end of the year," Trump said before heading to Philadelphia for the Army-Navy football game, adding that a replacement would be named "over the next day or two."

Trump spoke to reporters at the White House before departing for the Army-Navy football game in Philadelphia.

He calls Kelly "a great guy."

Kelly's replacement might be an interim chief of staff, until a permanent successor is found, the Republican president said.

"He's been with me almost two years now, between two positions," Trump told reporters. "I appreciate his service very much."

The West Wing shake-up comes as Trump is anticipating the challenge of governing and oversight when Democrats take control of the House in January, and as gears up for his own campaign for re-election in 2020.

Trump Friday announced that he would nominate William Barr, who served as attorney general under President George H.W. Bush, to the same role in his administration. He fills the slot vacated by former Alabama Sen. Jeff Sessions, who was jettisoned by Trump over lingering resentments for stepping aside from overseeing special counsel Robert Mueller's investigation.

Trump also said that State Department spokeswoman Heather Nauert was his pick to replace Nikki Haley as the next U.S. ambassador to the United Nations. Earlier Saturday, he announced that he wanted Army chief of staff Gen. Mark Milley as the next chairman of Joint Chiefs of Staff.

Among the other changes, two veterans of Trump's 2016 campaign, White House political director Bill Stepien and Justin Clark, the director of the office of public liaison, are leaving the administration to work on Trump's re-election effort. The moves had long been planned, but will give Kelly's eventual successor room to build their own political team.

Trump had discussed replacing Kelly on multiple occasions, including following the negative publicity surrounding Kelly's handling of domestic violence accusations against then-White House staff secretary Rob Porter. Some lower-level White House staffers believed Kelly had lied to them about when he knew of the allegations and when he made clear to Porter that he'd have to leave.

Trump had often tossed around potential replacements, but sensitive to charges that his administration has been marked by record turnover, he said in July that he would keep Kelly in the job through 2020.

But inside the White House, it was viewed largely as an attempt to clamp down on speculation about Kelly's fate during the midterm elections, rather than a true vote of confidence.

Kelly, too, made no secret of the trials of his job, and often joked about how working for Trump was harder than anything he'd done before, including on the battlefield. In private, Kelly, whom friends said took the job out of a sense of duty to his country, cast himself as safeguarding the public from an impulsive and mercurial president. Reports of those conversations infuriated the president, who is especially sensitive of attacks on his competence and perceptions he is being managed.

At an event celebrating the 15th anniversary of the Department of Homeland Security, Kelly joked that he missed everyone in the department "every day," offering a deadpan eye roll and smile that drew laughs and applause.

"At six months, the last thing I wanted to do was walk away from one of the great honors of my life, being the secretary of Homeland Security, but I did something wrong and God punished me, I guess," he joked.

Kelly, who had threatened to quit on several occasions, told friends he would be happy if he lasted until his one-year anniversary: July 28.