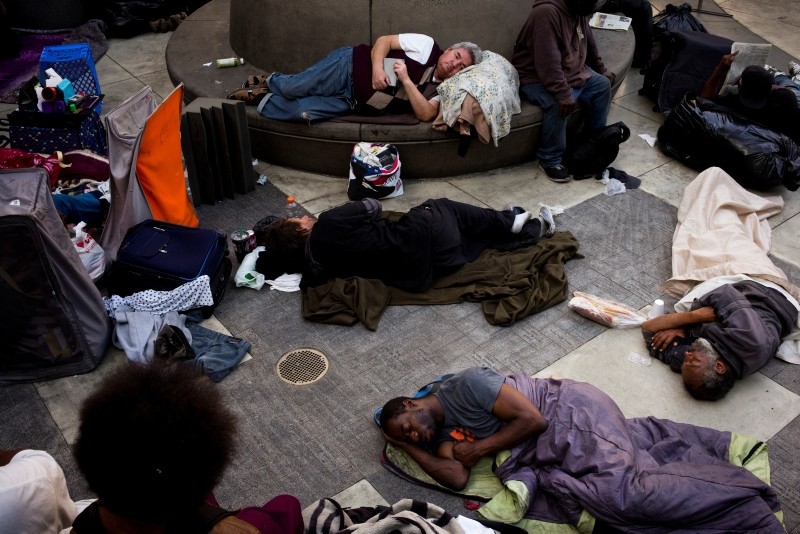 A group of homeless people sleep in the courtyard of the Midnight Mission in Los Angeles. The missionu2019s courtyard is open to all homeless people looking for a safe place to spend the night. (AP Photo)
by Daily Sabah Dec 13, 2018 12:00 am

The number of homeless men, women and children living in the second largest U.S. city of Los Angeles has increased by 47 percent since 2012, reaching 50,000.

Homelessness isn't new in Los Angeles, as Skid Row, a downtown area known as a center for poverty, has been occupied by the homeless for 150 years.

The number of homeless people in the city has skyrocketed and the problem has spread, the latest statistics of the U.S. Department of Housing and Urban Development indicates.

The city is only preceded by New York City in the U.S. with 75,000 homeless people. The ratio of homeless people living in cars or tents without proper shelter is far higher at 75 percent in Los Angeles, while only 5 percent in New York.

An NBC report suggests that although several charity organizations and volunteer foundations take care of the homeless people, they have not be provided permanent shelters. The problem is now spreading across the city from Hollywood to rural areas, leaving the Los Angles Police Department and Sanitation Department desperate.

"In the 1990s, there were maybe four or five streets known as the tent streets. Now they're on every block," Los Angeles police officer Deon Joseph was quoted by the Washington Post.

The number of homeless public school students, defined by the U.S. Department of Education as those who live in garages, motels, or lack a fixed, regular nighttime residence, reached 63,000 in 2017.

City officials previously announced plans to solve the problem by increasing the budget for homelessness funding or sponsoring volunteer organizations, but the number of tents on the streets have been increasing each day.