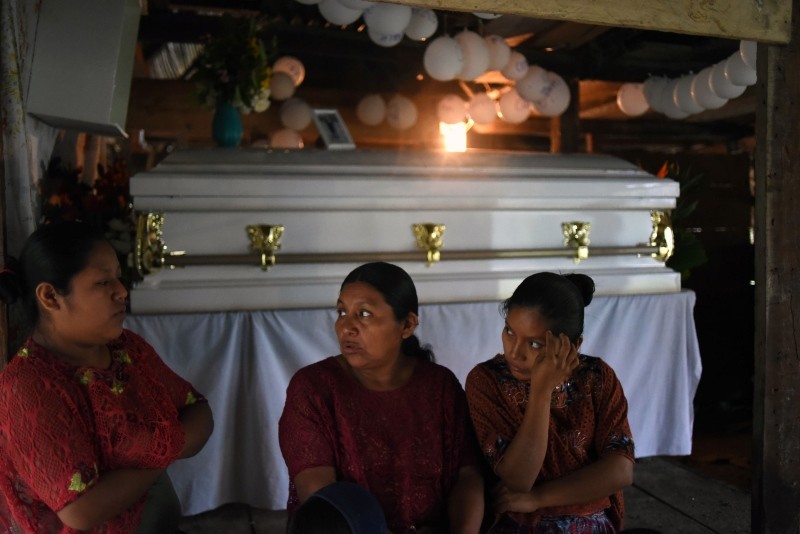 Local indigenous women sit next to the coffin of 7-year old Jakelin Amei Rosmery Caal, who died in a Texas hospital two days after being taken into custody by border patrol agents, Raxruha Village, Guatemala City, Dec. 24, 2018. (AFP Photo)
by Associated Press Dec 24, 2018 12:00 am
The white coffin with the body of the 7-year-old Guatemalan girl who died while in U.S. custody ended its heartbreaking journey home in the pre-dawn hours Monday in a tiny hamlet 220 miles north of the capital.

The death of Jakelin Caal earlier this month while in the custody of the U.S. Border Patrol was a tragic reminder of the plight of Central American migrants as they traverse dangerous routes to seek asylum in the U.S., and came as Americans are deeply divided over U.S. President Donald Trump's crackdown on immigration.

Villagers wept and watched curiously as the coffin arrived at the home of Jakelin's grandparents in San Antonio Secortez, where relatives had set up a small wooden altar flanked by vases and overflowing with flowers, photographs of the child and the hand-lettered message, "We miss you." The girl's mother, Claudia Maquin, closed her eyes and uttered a deep moan when confronted with her daughter's body, then covered her face and cried.

Behind the house, dozens of women prepared tamales and beans to feed mourners.

The village of about 420 people has no paved streets, running water or electricity, and residents say declining crop yields and lack of work have pushed many in the community to emigrate in recent years. Before the body arrived, it was taken by a procession to nearby communities where locals donated money and grain to the grieving family.

Domingo Caal, the girl's grandfather, told The Associated Press that the family couldn't afford to travel to the capital to meet the coffin there when it first landed in Guatemala's capital.

The girl and her father, Nery Gilberto Caal Cuz, had been traveling with a group of 163 migrants who were arrested Dec. 6 near a border crossing in New Mexico. The father signed an English-language form stating Jakelin was in good health, but it remains unclear whether he understood what it said.

Hours later, a bus carrying the two left the Antelope Wells port of entry for the Lordsburg station, roughly 90 minutes away. By then, according to a Customs and Border Protection statement, Jakelin's temperature had reached 105.7 degrees Fahrenheit (40.9 degrees Celsius). Emergency medical technicians had to revive her.

She was flown to a hospital in El Paso, Texas, where she died the next day.

Guatemalan Foreign Ministry spokeswoman Marta Larra said the ministry had sent a diplomatic note to the U.S. State Department asking for it to monitor the case and determine the cause of death.

Domingo Caal said his son has a Jan. 3 court date in the United States to determine his migratory status.