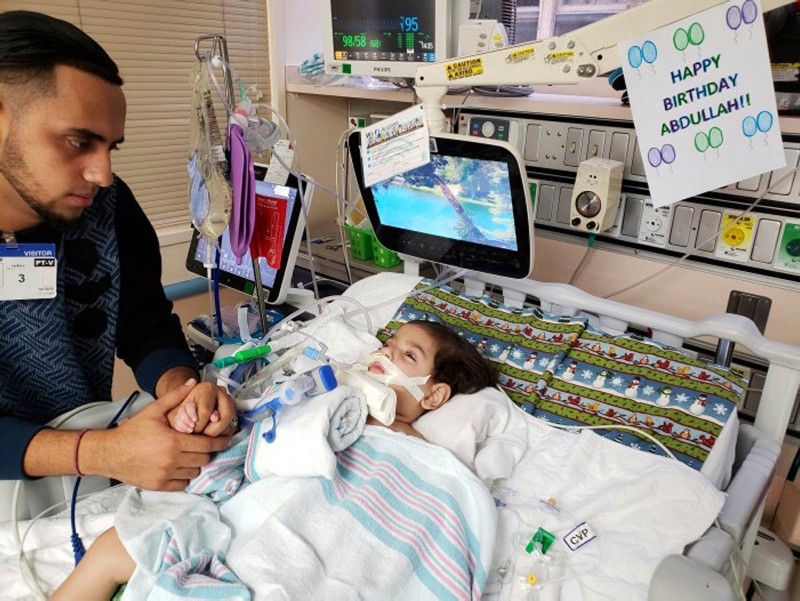 This recent undated photo, released Monday, Dec. 17, 2018, by the Council on American-Islamic Relations in Sacramento, Calif., shows Ali Hassan with his dying 2-year-old son Abdullah in a Sacramento hospital (AP Photo)
by Associated Press
Dec 29, 2018 12:00 am

The 2-year-old son of a Yemeni woman who sued for a waiver from the Trump administration's travel ban to be with the ailing boy in the United States has died, an advocacy group said.

Abdullah Hassan died Friday at UCSF Benioff Children's Hospital in Oakland, where his father, Ali Hassan, brought him in the fall to get treatment for a genetic brain disorder, the Council on American-Islamic Relations said. A funeral is scheduled for Saturday afternoon.

"We are heartbroken. We had to say goodbye to our baby, the light of our lives," Hassan said in a statement released by the organization.

Hassan is a U.S. citizen. He and his wife, Shaima Swileh, moved to Egypt after marrying in war-torn Yemen in 2016. Swileh is not an American citizen and remained in Egypt as she fought for a visa for a year and a half so the family could move to the United States.

Citizens from Yemen and four other mostly Muslim countries, along with North Korea and Venezuela, are restricted from coming to the United States under President Donald Trump' s travel ban.

When the boy's health worsened, the father went ahead to California in October to get their son help. As the couple fought for a waiver, doctors put Abdullah on life support.

"My wife is calling me every day wanting to kiss and hold her son for the one last time," said Hassan, choking up at a news conference earlier this month.

He started losing hope and was considering pulling his son off life support to end his suffering. But then a hospital social worker reached out to the Council on American-Islamic Relations, which sued on Dec. 16, said Basim Elkarra, executive director of the group in Sacramento.

The State Department granted Swileh a waiver the next day. She was pictured cradling her son in the hospital 10 days ago.

The hospital declined to comment on the family's case, a spokesman said Saturday.

"With their courage, this family has inspired our nation to confront the realities of Donald Trump's Muslim Ban," said Saad Sweilem, a lawyer with the council who represents the family. "In his short life, Abdullah has been a guiding light for all of us in the fight against xenophobia and family separation."