Cyberattack causes nationwide disruption in printing, distribution of US newspapers 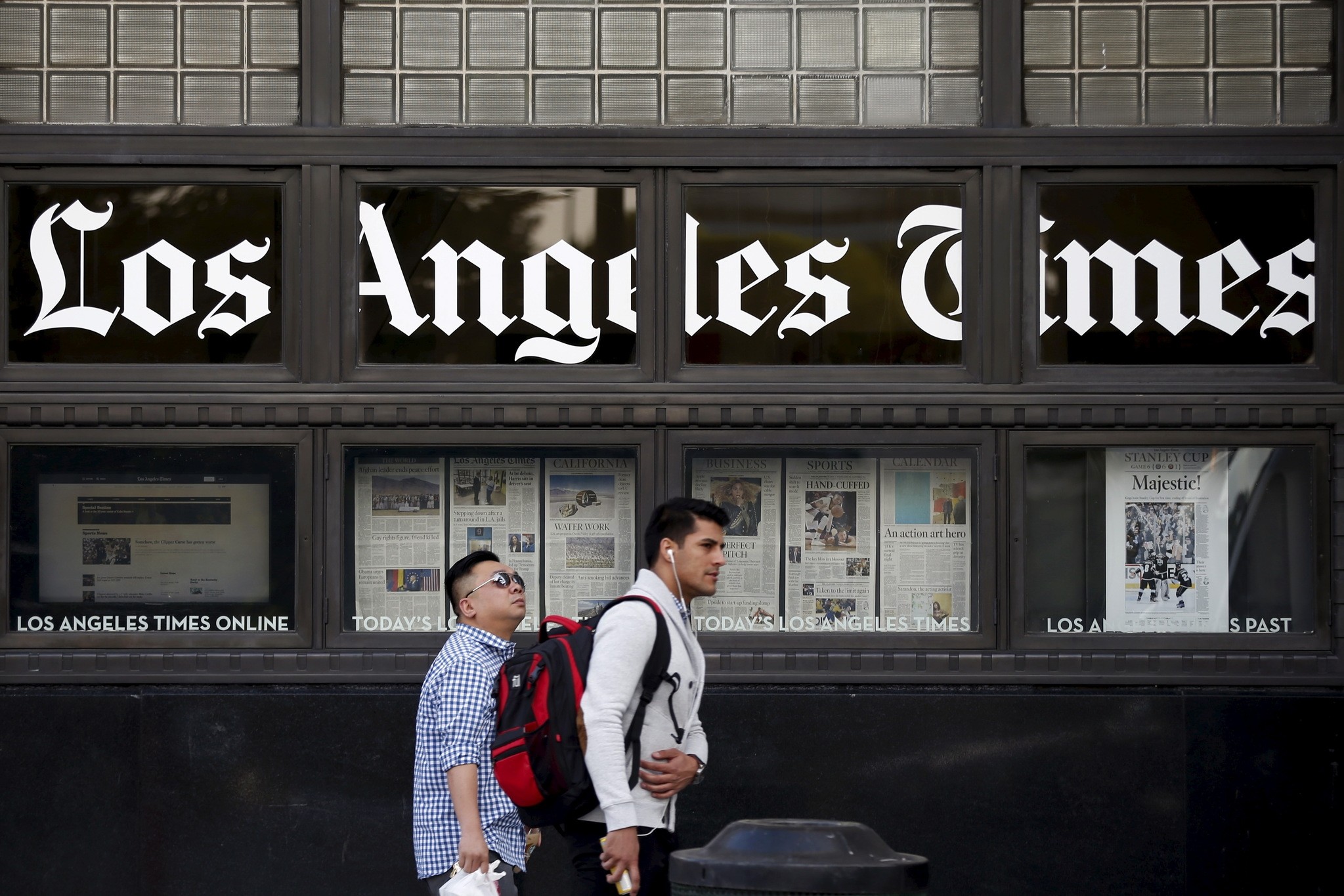 A cyberattack that appears to have originated from outside the United States caused major printing and delivery disruptions at several newspapers across the country on Saturday including the Los Angeles Times, according to a source with knowledge of the situation.

The attack led to distribution delays in the Saturday edition of The Times, The San Diego Union-Tribune, The Chicago Tribune, Baltimore Sun and several other major newspapers that operate on a shared production platform.

It also stymied distribution of the West Coast editions of The Wall Street Journal and New York Times, which are all printed at the Los Angeles Times' Olympic printing plant in downtown Los Angeles.

"We believe the intention of the attack was to disable infrastructure, more specifically servers, as opposed to looking to steal information," said the source, who spoke on the condition of anonymity because he was not authorized to comment publicly.

No other details about the origin of the attack were immediately available, including the motive. The source identified the attacker only as a "foreign entity."

All papers within The Times' former parent company, Tribune Publishing, experienced glitches with the production of papers. Tribune Publishing sold The Times and The San Diego Union-Tribune to Los Angeles businessman Dr. Patrick Soon-Shiong in June for $500 million, but the companies continue to share various systems, including software.

"Every market across the company was impacted," said Marisa Kollias, spokeswoman for Tribune Publishing. She declined to provide specifics on the disruptions, but the company properties include The Chicago Tribune, Baltimore Sun, Annapolis Capital-Gazette, Hartford Courant, New York Daily News, Orlando Sentinel and Fort Lauderdale Sun-Sentinel.

Tribune Publishing said in a statement Saturday that "the personal data of our subscribers, online users, and advertising clients has not been compromised. We apologize for any inconvenience and thank our readers and advertising partners for their patience as we investigate the situation. News and all of our regular features are available online."

The Times said the problem was first detected Friday. Technology teams made significant progress in fixing it, but were unable to clear all systems before press time.

Director of Distribution Joe Robidoux said he expects the majority of Los Angeles Times subscribers will receive their paper Saturday, however delivery will be late. For print subscribers that did not receive Saturday's paper, they will receive the paper with their regularly scheduled delivery of the Sunday edition.

The attack seemed to have begun late Thursday night and by Friday had spread to crucial areas needed to publish the paper.

The computer problem shut down a number of crucial software systems that store news stories, photographs and administrative information, and made it difficult to create the plates used to print the papers at The Times' downtown plant.

"We are trying to do work-arounds so we can get pages out. It's all in production. We need the plates to start the presses. That's the bottleneck." Robidoux said.

"We apologize to our customers for this inconvenience. Thank you for your patience and support as we respond to this ongoing matter," The Times said in a statement.

It was unclear whether the company has been in contact with law enforcement regarding the suspected attack. An FBI spokeswoman was not immediately aware if the incident had been reported to her agency.

The problem caused widespread issues for Sun-Sentinel readers in South Florida, one of Tribune Publishing's major markets. The paper told readers that it had been "crippled this weekend by a computer virus that shut down production and hampered phone lines," according to a story on its website.

The problem caused widespread confusion, the paper noted, because subscribers who called the newspaper's offices on Saturday morning were "told, incorrectly, that the numbers were not in service."

New York Times and Palm Beach Post readers in South Florida also failed to receive their Saturday editions because the Sun-Sentinel also prints those newspapers. The Sun Sentinel told readers that they would receive their Saturday issue along with their Sunday papers. The Orlando Sentinel subscribers received their papers on time, according to a Tribune Publishing executive.

"Usually when someone tries to disrupt a significant digital resource like a newspaper, you're looking at an experienced and sophisticated hacker," said Pam Dixon, executive director of the World Privacy Forum, a nonprofit public interest research group.

Malware has, over time, become more sophisticated and coordinated, involving more planning by networks of hackers who infiltrate a system over time, she said.

"Modern malware is all about the long game," Dixon said. "It's serious attacks, not small stuff anymore. When people think of malware, the impression may be, 'It's a little program that runs on my computer,'" Dixon said.

Today, "malware can root into the deepest systems and disrupt very significant aspects of those systems."

The report said it could not provide firm numbers on how many subscribers were impacted but a majority of LA Times customers received their papers Saturday morning, albeit several hours late.

"We believe the intention of the attack was to disable infrastructure, more specifically servers, as opposed to looking to steal information," the LA Times quoted a source with knowledge of the situation as saying.

Spokeswoman Hillary Manning says the paper has been working to fix the issues but added that Sunday deliveries may be affected as well.

The paper cited officials as saying it was too soon to know whether it was carried out by state or non-state actors.

A spokeswoman for the Department of Homeland Security said it was studying the situation.

"We are aware of reports of a potential cyber incident affecting several news outlets, and are working with our government and industry partners to better understand the situation," said DHS spokeswoman Katie Waldman in a statement.

Representatives of the Federal Bureau of Investigation were not immediately available for comment.