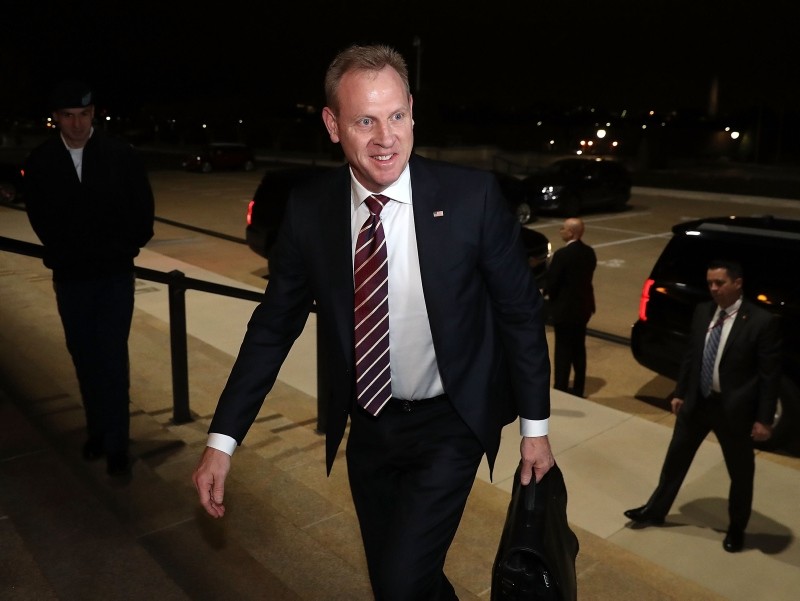 Acting U.S. Defense Secretary Patrick Shanahan arrives at the Pentagon for the first time in his official capacity, on January 2, 2019 in Arlington, Virginia. (AFP Photo)
by Compiled from Wire Services Jan 02, 2019 12:00 am

The comments underscoring Shanahan's focus on China came during his first meeting with department's top civilian leaders, including the heads of the military services since taking over for Jim Mattis, who resigned as defense secretary over policy differences with President Donald Trump.

Shanahan told key Defense Department staff to focus on the National Defense Strategy, a broad review that highlights a new era of "Great Power competition" with Russia and China.

"Acting Secretary Shanahan told the team to focus on the national defense strategy and to keep this effort moving forward," the U.S. defense official told reporters.

"While we are focused on ongoing operations, Acting Secretary Shanahan told the team to remember China, China, China," the official said.

The U.S. official, who spoke on condition of anonymity, did not elaborate on Shanahan's views on China. But other officials have described him as a driving force behind the Pentagon's toughening stance toward Beijing, which includes branding China as a strategic competitor in the 2018 National Defense Strategy.

The U.S. accuses Beijing of an ongoing pattern of military and economic espionage, and has criticized China's ambitious "Belt and Road" trade and infrastructure initiative as being a form of economic coercion.

The defense official said Shanahan would later Wednesday attend a cabinet meeting with Trump, the president's first of 2019.

Little known outside business and Washington circles, Shanahan takes the world stage at a time of tumultuous changes and unpredictable foreign policy moves under Trump.

Shanahan, a former Boeing executive, had been Mattis' deputy and it was unclear how long he will remain in the role of acting secretary. Trump could face an uphill battle finding someone who can be confirmed by the Senate in the wake of Mattis' acrimonious departure.

Among the most immediate issues on his plate will be the pace at which the U.S. pulls 2,200 or so troops out of Syria, following Trump's decision last month to exit the war-torn country.

According to U.S. officials, Trump is also mulling a 50 percent draw down in Afghanistan -- another momentous move that has left lawmakers and international allies fearing for what comes next.

David Norquist, the Pentagon's comptroller, will perform the duties of the deputy as well as retain his current title. Shanahan, in a statement on Tuesday shortly after taking over the job, said he looked "forward to working with President Trump to carry out his vision" which includes a surprise withdrawal from Syria and an expected drawdown in Afghanistan, America's longest war.