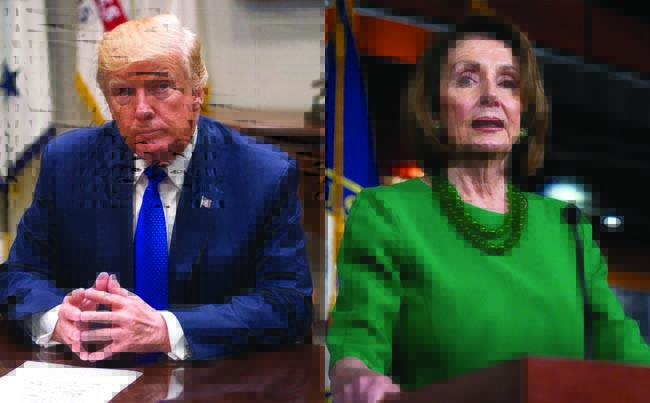 This combo photo shows U.S. President Donald Trump, left, and the Speaker of the House of Representatives Nancy Pelosi. (EPA, AP Photos)
by Jan 05, 2019 12:00 am

He's in the White House. She's in Congress. For the next two years, Donald Trump and Nancy Pelosi will have to work together. It won't be easy.

Trump, the Republican president, will need to deal with Pelosi, the Democratic speaker of the House of Representatives, if he wants to improve on what has been a thin list so far of legislative accomplishments.

Pelosi, second in line for the presidency, will need to show that Democrats are ready to govern and have more to offer than just opposition to Trump ahead of the 2020 presidential election.

Trump and Pelosi are separated by more than just their politics. He is a bombastic New York real estate tycoon who revels in railing against Washington, which he refers to as "The Swamp." She represents liberal San Francisco in Congress and has spent more than three decades negotiating the corridors of power on Capitol Hill.

The 72-year-old Trump is generally quick to slap a derisive nickname on his political opponents but he has not done so with Pelosi, who at 78 is six years his senior. "I like her," Trump said of Pelosi shortly after she led the Democrats to a decisive victory in the House in the November midterm elections.

"Can you believe it?" Trump said. "I like Nancy Pelosi. I mean, she's tough and she's smart." "She deserves to be speaker," he said.

Trump's relationship with his Democratic opponents has been stormy since he took office and few expect things to change significantly now that Pelosi has assumed the role of speaker.

Trump and Pelosi had a memorable encounter in the Oval Office last month as they aired their disagreements over Trump's demand that Congress provide $5 billion in funding for a wall along the southern border with Mexico.

Pelosi at one point characterized as a "Trump shutdown" the president's threats to partially shut down the federal government if he did not receive the money for the wall. "Did you say 'Trump,'" an offended Trump shot back. "I was going to call it a 'Pelosi shutdown.'"

Both sides have pointed to areas where they could potentially reach an agreement, modernizing infrastructure and lowering the prices of prescription drugs, for example. But those moments could be few and far between.

Pelosi has served as speaker before with a Republican in the White House, George W. Bush, and is the first woman ever to hold the post. But the 45th president is very different from the 43rd and Pelosi, who has spoken admiringly of the Bushes, is loath to compare the two. "When you are negotiating with someone you have to... stipulate to some fact," Pelosi told NBC of Trump. "It's hard to do that with the president because he resists science, evidence, truth," Pelosi said. "It's hard to pin him down on the facts."