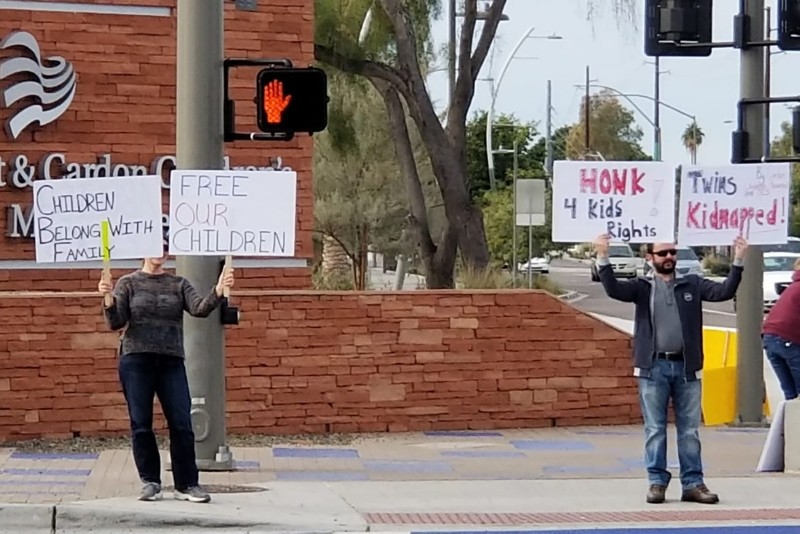 This photo published Jan. 6, 2019, shows people protesting against the removal of the Kahraman children from their family by the Arizona Department of Child Safety (DCS) in front of the Cardon Childrenu2019s Medical Center in Mesa, Ariz. (IHA Photo)
by daily sabah
Jan 25, 2019 11:52 am

Custody of six-year-old twin boys on Friday was taken from a Turkish family by the Arizona Department of Child Safety (DCS) over child neglect, the Ihlas News Agency (IHA) said Sunday.

According to the parents, since birth their children have been allergic or sensitive to many types of foods and chemicals, which is why wheat and other processed foods as well as genetically-modified products were removed from the twins' diet.

The children grew up healthily eating on their organic diet, the family insisted.

The boys' health problems resurfaced when they started attending school, the Kahramans said, adding that exposure to school supplies such as blackboard eraser and markers prompted a visit to a doctor.

As problems continued the family took their children to the Cardon Children's Medical Center, where following a checkup a doctor said the boys were malnourished, notifying the DCS, which took them into custody.

The Kahramans said the diagnosis was not accurate as the twins were hungry when taken by their parents to the emergency room.

The couple and a number of locals later staged a protest against the DCS' actions in front of the hospital.

"They are not showing us our kids and not letting us speak to them on the phone. They discharged my hospitalized son Kenan and placed him in some house. I don't know where he is or whether he's with his brother," the father said.

He added that if the children do not come home within days, the family will launch a legal process against the authorities.

Turkey's Consul General in Los Angeles Oğuz Can said the mission was aware of the issue, adding that the consulate was in contact with the family, the DCS and the hospital. He said the consulate will continue to closely follow the situation.