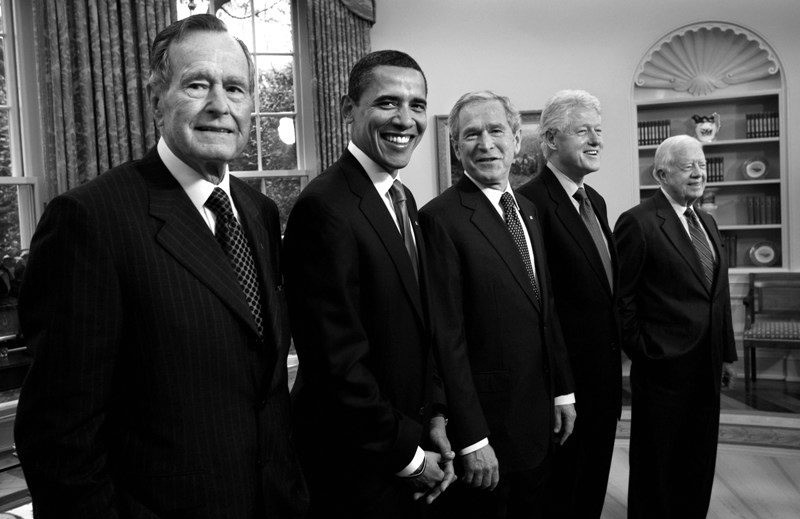 Jimmy Carter on Monday joined the list of former U.S. presidents to deny Donald Trump's claims that "some" of them told him they regret not building a wall along the border with Mexico.

"Clarification from former U.S. President Jimmy Carter: 'I have not discussed the border wall with President Trump, and do not support him on the issue,'" The Carter Center wrote on Twitter on Monday.

Trump made his unsupported claim on Friday during an appearance in the White House Rose Garden, in which he reiterated that he would not reopen the government until Democrats approved his $5.6 billion earmarked for the wall.

"This should have been done by all of the presidents that preceded me and they all know it. Some of them have told me that we should have done it," Trump said.

Clinton's spokesman Angel Urena was quoted by Politico as saying, "(Clinton) did not. In fact, they've not talked since the inauguration."

And as for Obama, his stance has consistently been opposed to Trump's wall pledge.

"Suggesting that we can build an endless wall along our borders, and blame our challenges on immigrants — that doesn't just run counter to our history as the world's melting pot, it contradicts the evidence that our growth and our innovation and our dynamism has always been spurred by our ability to attract strivers from every corner of the globe," Obama said in 2016.

The only other former president to have been alive during Trump's time in office is George H. W. Bush, who died in November.

Trump has an unusual lack of contact with his predecessors, even the Republican ones, since taking office.

Carter has previously criticized the president for his lack of honesty.

"I think it's well-known that the incumbent president is very careless with the truth," Carter said in an interview with CBS News last year.

"I think I went through my campaign and my presidency without ever lying to the people or making a deliberately false statement, and I think that would be a very worthwhile thing to reinsert into politics these days," he said.

Trump on Sunday renewed his threat to declare a national emergency over border security as negotiations to end a partial government shutdown continued.

Trump and fellow Republicans have been at odds with Democrats over Trump's demand for $5.6 billion in funding for a wall.

Speaker of the House Nancy Pelosi and other Democrats have refused to include funding for a wall in spending bills for about one-quarter of the U.S. government.

Democrats say Trump's request is too high and urge Trump to support passage of legislation funding the government immediately and then negotiate border security, including a wall, over the next few weeks.

Trump said Sunday he bent to Democrats' demand that the barrier be made of steel, which he said will be stronger and less obtrusive. He previously said it would be made of concrete.

The stalemate over spending on border security has resulted in the partial government shutdown, now in Day 17. Several hundred thousand government employees are on furlough without pay, while others are working but not receiving paychecks.