Maduro sworn in for second term as Venezuela president 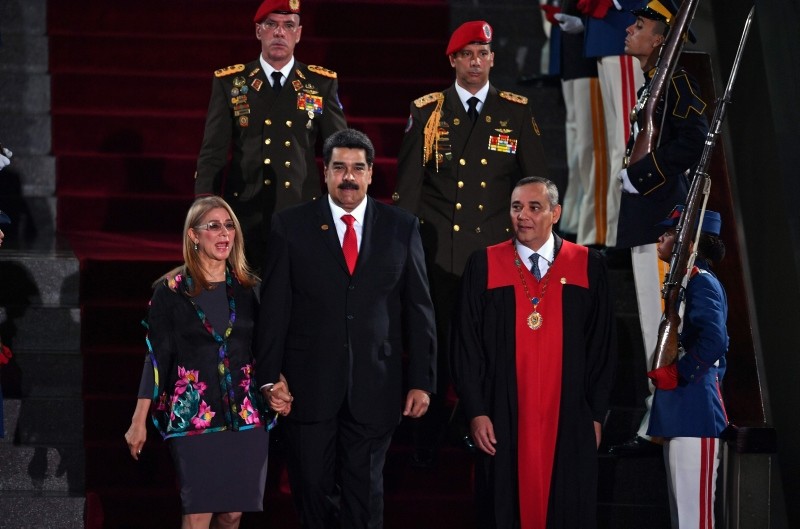 Venezuela's President Nicolas Maduro (C) walks flanked by First Lady Cilia Flores and the president of the Supreme Court of Justice (TSJ) Maikel Moreno (R) upon arrival for the inauguration ceremony of his second mandate (AFP Photo)
by Daily Sabah with Agencies Jan 25, 2019 11:52 am

Venezuela's President Nicolas Maduro was sworn in Thursday for a second term, amid cheers and applause by a crowd of hundreds attending the inauguration in Caracas.

Maduro, 56, was sworn in by Supreme Court president Maikel Moreno.

The ceremony was boycotted by the European Union, United States and Venezuela's South American neighbors, who have branded Maduro's leadership illegitimate.

Mexico, the only member of the group which did not sign the decision, was represented by commercial attache in Caracas.

Meanwhile, the Permanent Council of the Organization of American States (OAS) on Thursday agreed "to not recognize the legitimacy of Nicolas Maduro's new term as of the 10th of January of 2019," the bloc said in a statement.

"The resolution was approved with 19 votes in favor, 6 against, 8 abstentions and one absent," the statement added.

Maduro won a second term in office in May.

The 55-year-old won some 5.8 million votes, or 68 percent of the total, while main opposition candidate Henri Falcon won 1.8 million votes or 21.2 percent.

Turnout was around 46 percent — the lowest in a presidential race in two decades of revolution. About 20.5 million people were eligible to vote, but many analysts predicted a low turnout after the opposition alliance Democratic Unity Roundtable (MUD) called on voters to boycott the poll.