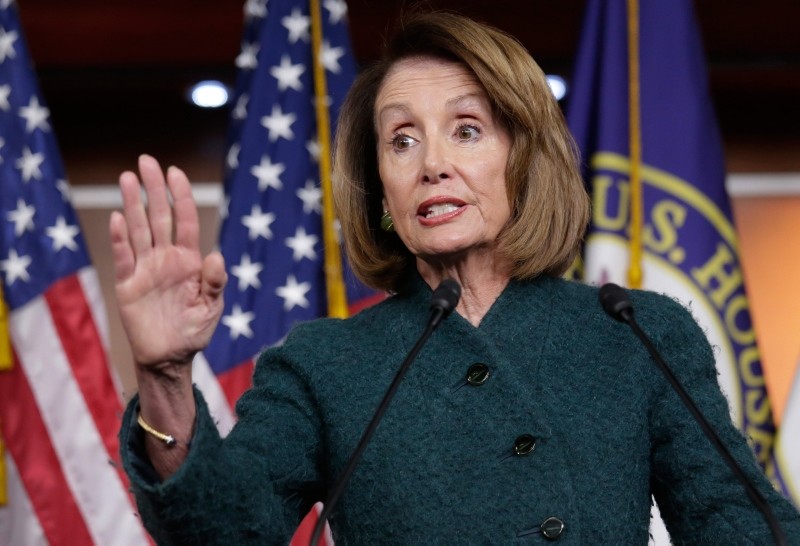 In this Jan. 10, 2019 photo, Speaker of the House Nancy Pelosi, D-Calif., meets with reporters in her first formal news conference, on Capitol Hill in Washington. Pelosi has asked President Donald Trump to postpone his State of the Union address to
by Compiled from Wire Services Jan 25, 2019 11:52 am

U.S. House Speaker Nancy Pelosi on Wednesday asked President Donald Trump to reschedule the annual State of the Union address until the government fully reopens, as a partial government shutdown stretched into its 26th day with no signs of resolution.

With the address scheduled for Jan. 29, Pelosi wrote a letter to Trump citing security concerns because the Secret Service, which is required to provide security for the address, has not received funding during the impasse. The standoff was triggered by Trump's demand for a round of funding for his promised wall on the U.S.-Mexico border.

"Sadly, given the security concerns and unless government re-opens this week, I suggest we work together to determine another suitable date after government has re-opened for this address or for you to consider delivering your State of the Union address in writing to the Congress," Pelosi wrote in a letter.

The State of the Union address is an annual speech in which the president outlines the administration's goals for the year. All members of Congress and the Supreme Court attend, along with all but one member of the president's Cabinet.

The U.S. Secret Service, which is charged with the protection of the president, provides security for what are known as national special security events, including the State of the Union.

"However, both the U.S. Secret Service and the Department of Homeland Security have not been funded for 26 days now -- with critical departments hamstrung by furloughs," Pelosi noted in her letter.

She also said that "since the start of modern budgeting in Fiscal Year 1977, a State of the Union address has never been delivered during a government shutdown."

The notion that Trump, a billionaire businessman who dramatically boosted his national prominence through his reality television show "The Apprentice," would send in a written version of his address seems quaint in today's screen-dominated digital era.

But Pelosi pointed out that up until Woodrow Wilson's presidency in the early 20th century, "these annual State of the Union messages were delivered to Congress in writing."

The White House had no immediate comment on Pelosi's request.

Trump on Wednesday is expected to sign legislation that would ensure 800,000 federal employees will receive back pay when the government reopens. He also is scheduled to meet with a bipartisan group of lawmakers at 11:30 a.m. EST (1630 GMT).

But that may provide little relief for government employees, some of whom are being asked to come back to work after being initially furloughed and told to stay home, although they will not be paid on schedule.

Both the Internal Revenue Service and the Federal Aviation Administration on Tuesday said they would call back nearly 50,000 employees to process tax returns, refunds and other tasks or to work in aviation safety inspection.

The Washington Post reported that Food and Drug Administration workers also have been called to work without pay during the shutdown.

The United States is in the grips of its longest-ever government shutdown, with about 25 percent of federal agencies and offices shuttered.

The shutdown began on Dec. 22 after Trump insisted he would not sign legislation funding the idled government agencies unless it included more than $5 billion for the border wall.

The wall was a signature campaign promise of his before the 2016 presidential election. Trump said at the time Mexico would pay for it but has since reversed himself, denying that he ever said Mexico would directly pay the bill.

Trump initially said he would take responsibility for the shutdown but later shifted blame to Democrats.

But Trump's comments and tweets appear unlikely to move Democrats, who have controlled the House of Representatives since Jan. 3. Trump also needs the support of at least some Democrats in the Senate to pass funding legislation.

Senate Democrats have planned to gather on the steps of the Capitol to highlight the havoc the shutdown is wreaking, as 800,000 federal workers are furloughed or work without pay, and contractors do not receive payments.

Economists have estimated that each week the shutdown continues will shave off 0.1 percent of economic growth.

More than half of Americans blame Trump for the government shutdown, according to a Reuters/Ipsos poll. A separate poll found the shutdown has affected four in 10 Americans, far beyond the federal employees directly feeling the impact of the funding lapses.