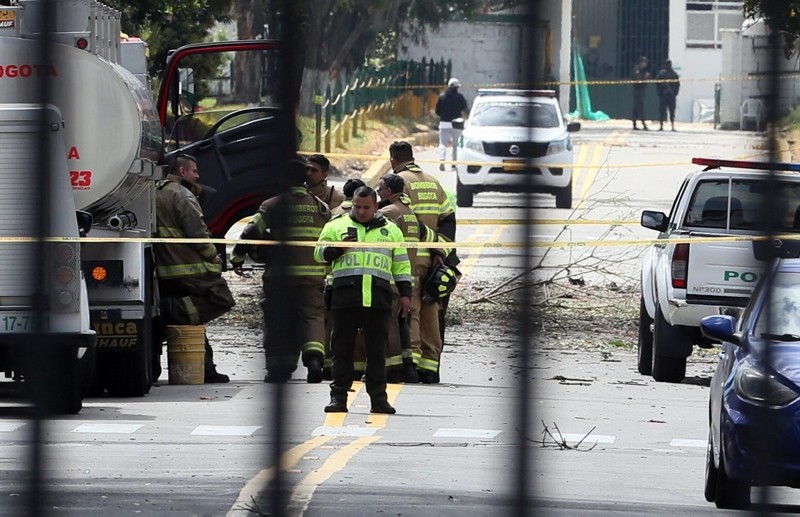 Colombian authorities said that a one-armed explosives expert belonging to the country's last remaining rebel group carried out a car bombing against a police academy that left 21 dead and dozens more wounded.

Chief Prosecutor Nestor Martinez said at a press conference Friday that the man who carried out Thursday's brazen attack, the deadliest in 15 years in the South American nation, was a longtime member of the National Liberation Army, or ELN.

Even though Jose Aldemar Rojas had no criminal record, Martinez said that the 56-year-old man is the same individual known in intelligence reports by alias Mocho Kiko, who lost his arm manipulating explosives during a long clandestine career with an ELN cell near the border with Venezuela.

The shock bombing recalled some of the bloodiest chapters of Colombia's recent past and has raised tough questions about lingering security threats in the wake of a 2016 peace deal with FARC rebels. It would also appear to torpedo any chance of stalled peace talks with the ELN resuming any time soon.

"The entire Colombian state," Martinez said, "is prepared to confront with the constitution and laws in our hands those who want to ambush our national security and impose the force of terrorism."

President Ivan Duque will announce later Friday the government's stance on the future of the peace talks.

But Martinez said top ELN commanders, who had been living in Cuba during the peace process and are believed to have only minimal control over their troops, would be held accountable for the attack.

Overnight, the death toll from the bombing more than doubled to 21, the worst tragedy since a 2003 car bombing carried out by FARC rebels against an elite Bogota social club that killed 36. It proved especially unsettling because the target, the General Santander school, is one of the city's most protected installations.

"All Colombians reject terrorism and we're united in fighting it," President Ivan Duque tweeted in the aftermath.

Later in a statement to the nation, he said he had ordered reinforcements to Colombia's borders and routes in and out of cities.

The bomber -- who authorities confirmed was killed in the attack -- struck at the General Francisco de Paula Santander Officer's School in the south of Bogota during a promotion ceremony for cadets.

Martinez said Rojas Rodriguez entered the school compound at 9:30 am (1430 GMT) driving a grey 1993 Nissan Patrol truck, but gave no details about the explosion.

He said the truck underwent an inspection in July in the Arauco department on the border with Venezuela -- a traditional stronghold of ELN Marxist guerrillas.

Ecuador's President Lenin Moreno said one of the dead was an Ecuadoran cadet, while a second suffered light injuries.

"The brutal act of terrorism in Bogota took the life of a compatriot," Moreno said on Twitter.

"My sincerest thoughts go to the family, friends and companions of Erika Chico."

Fanny Contreras, the Colombian armed forces' health inspector, told local radio that the truck "entered (the school compound) suddenly, almost hitting the police, and then there was the explosion."

Carol Oviedo said her brother Jonathan, a cadet, told her on the phone he had been injured, before the connection was cut.

"In two years since he joined the police, he's never had to face a situation like this," she said.

Like other families, she was lingering in the vicinity of the academy hoping to hear some news.

United States assistant secretary of state in charge of Latin America, Kimberly Breier condemned the attack and said: "Our condolences and sympathies go to the victims and family members of those killed."

The U.S. embassy in Bogota offered its "help in investigating this reprehensible attack."

Turkey on Friday condemned the attack in a statement.

"We strongly condemn the atrocious terror attack that took place in the south of Bogota at Santander Police Academy, which caused the loss of the lives of many policemen and injury of police academy graduates," the Foreign Ministry said in a statement.

The ministry also extended its condolences to the families of the victims and the people of Colombia.

Rosalba Jimenez, 62, was opening her confectionary store near the school when the bomb went off.

"When we turned to look at the school the sky was grey with smoke. People were running, sirens... horrible, horrible, it seemed like the end of the world," Jimenez told AFP.

Authorities sealed off the area to the press and increased security service patrols in the south of the city, AFP reporters said.

Right-wing Duque, who assumed power in August, has peddled a tough line against Marxist rebels and drug traffickers in the largest cocaine producer in the world.

Peace talks with ELN guerrillas -- who in the past have claimed responsibility for bomb attacks on police -- stalled before Duque replaced Juan Manuel Santos as president, and have not been restarted.

Duque has made several demands, including the release of all hostages and refusal of talks with the group unless it unilaterally stops attacks, as prerequisites to kick-starting the peace process, but the ELN has dismissed those as unacceptable.

After the 2016 peace accord signed by Santos and FARC guerrillas, turning the former rebels into a political party, the ELN, which has an estimated 1,500 fighters, is considered the last active rebel group in a country that has suffered more than half a century of conflict.

That cycle of violence has also involved paramilitaries, drug traffickers and other Marxist rebels, including FARC dissidents.

Its statement called on the government not to give in to "war-like hysteria and militarist solutions" and advocated "peace through dialogue."

FARC representative Pastor Alape Lascarro called the attack "a provocation against the political solution to the conflict."

"It tries to close possibilities of an agreement with ELN, delegitimize social mobilization and favor war-like sectors," he tweeted.

ELN has carried out major attacks in the past, though in recent times it has only staged smaller ones against the country's oil and road infrastructure, as well as kidnappings.

A year ago, six police died and 40 were injured in an attack on a police station in the Caribbean city of Barranquilla that was claimed by the ELN.

In February 2017, the ELN claimed responsibility for an attack on a police patrol in the Macarena neighborhood of Bogota that left one officer dead and several seriously wounded.

In June, three people -- including a Frenchwoman -- were killed and nine others wounded in an attack on a Bogota shopping mall that authorities blamed on a fringe left-wing group called the Revolutionary People's Movement (MRP).

Armed conflicts in Colombia have left more than 260,000 people dead since 1958, according to the governmental National Centre for Historical Memory. About 7 million people have been displaced.