Illegal products made of endangered animals sold at US expo 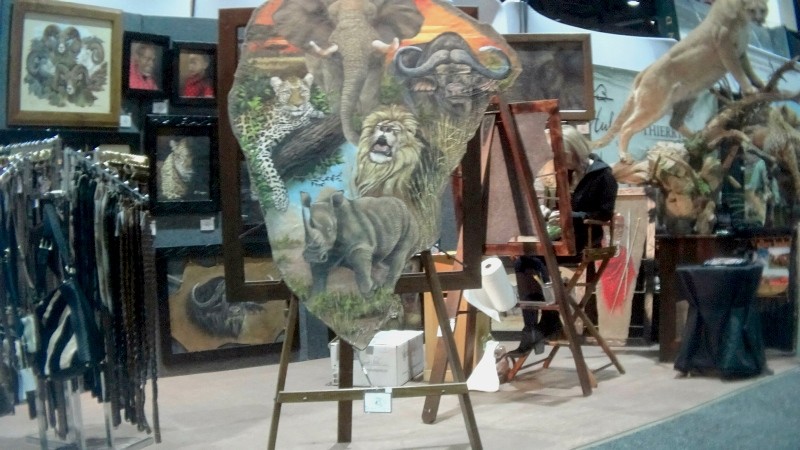 This image provided by the Humane Society of the United States shows a painting on elephant hide for sale at the Safari Club International conference in Reno, Nevada. (AP Photo)
by Associated Press
Jan 25, 2019 11:52 am

Photos and video taken by animal welfare activists at a recent trophy hunting convention show an array of products crafted from the body parts of threatened big-game animals, including boots, chaps, belts and furniture labeled as elephant leather.

Vendors at the Safari Club International event held last week in Reno, Nevada, also were recorded hawking African vacations to shoot captive-bred lions raised in pens. The club has previously said it wouldn't allow the sale of so-called canned hunts at its events.

The hidden camera footage was released Friday by the Humane Society of the United States. Both federal and state laws restrict the commercial sale of hides from African elephants, which are protected under the Endangered Species Act.

Nevada's chief game warden confirmed to The Associated Press on Friday that an investigation is underway to determine if state law was violated.

Safari Club spokesman Steve Comus said Friday the group was also conducting an internal investigation after what he described as allegations based on "what appears to be an unauthorized visit" by the Humane Society. The group didn't respond to written questions from the AP about what steps it takes to ensure exhibitors at its events are following the law.

The club denied a request earlier this month from the AP for a media credential to attend its annual conference, billed as the nation's premier big-game hunting show.

"This hunters' heaven has everything the mind can dream of and occupies more than 650,000 square feet of exhibit space," the group's web site boasts. "Six continents are under one roof where SCI members come to book hunts, rendezvous with old friends and shop for the latest guns and hunting equipment."

Humane Society investigators purchased tickets to the conference and prowled the exhibit booths with concealed cameras. They recorded racks of clothing and other products made from the hides, bones and teeth of imperiled African wildlife.

"Making money off the opportunity to kill these animals for bragging rights is something that most people around the world find appalling," said Kitty Block, acting president and CEO of the Humane Society of the United States. "It's an elitist hobby of the 1 percent, and there is no place for trophy hunting in today's world."

The wares included oil paintings of big-game animals painted on stretched elephant skins, bracelets woven from elephant hair and an elephant leather bench. There was also a coffee table made from the skull of a hippopotamus and boxes filled with hippo teeth.

Under a state law passed in 2017, it is illegal in Nevada to purchase, sell or possess with intent to sell any item that contains the body parts of elephant, lion, rhinoceros, tiger, leopard, hippopotamus and other imperiled wildlife. A first offense is a misdemeanor that carries a fine up to $6,500 or an amount equal to four times the fair market value of the item sold, whichever is greater. Additional violations can be classified as a felony punishable by up to five years in prison.

Tyler Turnipseed, the state's chief game warden, confirmed Friday that his office had opened an investigation as a result of the information and images provided by the Humane Society. He said that there is a learning curve when new laws are implemented and that state officials would work with the Safari Club "to try and prevent unlawful sales in future years."

Though President Donald Trump has decried big-game hunting as a "horror show," his administration reversed Obama-era restrictions on the importation of elephant and lion trophies for personal use or display. But federal law still prohibits the sale or use of the body parts from such international protected species for commercial purposes.

The Safari Club has actively lobbied the Trump administration to loosen restrictions on the importation of wildlife trophies, arguing that the fees paid to African countries by American hunters help to fund anti-poaching and conservation programs. A licensed two-week African hunting safari can cost more than $50,000 per person, not including airfare, according to advertised rates.

The AP reported last year that a federal advisory board created by then-Interior Secretary Ryan Zinke to advise his agency on the issue was stuffed with big game hunters. At least seven of the 16 members of the International Wildlife Conservation Council are Safari Club members, including the group's president.

In a February 2018 media release, the Safari Club said it would no longer support the practice of breeding lions in captivity so they can be shot for trophies, saying the practice "has doubtful value to the conservation of lions in the wild." The club also pledged not to accept advertising from the operators of such canned hunts or allow such trips to be sold at its annual convention.

In the video released Friday by the Humane Society, multiple vendors at the Safari Club conference were recorded as they pitched hunts of captive-bred lions in South Africa. The salesmen described how the lions would be "placed" where they could be easily shot. Vendors also described hunts where lions were baited using the meat from giraffes or other animals, with one guide bragging that a customer had shot a lion in less than 90 minutes.