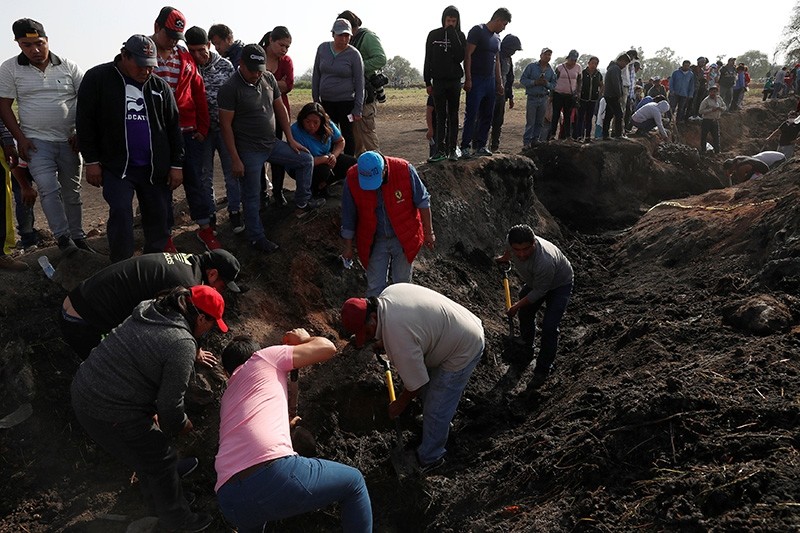 Residents search for human remains and items that could identify missing relatives and friends at the site where a pipeline ruptured by oil thieves exploded, in the municipality of Tlahuelilpan, Hidalgo, Mexico Jan. 20, 2019. (Reuters Photo)
by Jan 25, 2019 11:52 am

The death toll from a fiery explosion in central Mexico rose to 89 on Monday as authorities vowed to hold accountable those responsible for a deliberate fuel-line puncture that drew hundreds of people looking to gather gasoline before it ignited.

The search for human remains at the site of the explosion in the state of Hidalgo ended late Saturday. While families began to bury the dead, officials indicated the death toll could still rise.

In a press conference on Monday, Health Minister Jorge Alcocer said: "We've had four more deaths on top of the 85 announced, now we're at 89."

He had said on Sunday that on top of the confirmed deaths, another 58 people were hospitalized in Hidalgo, while others in worse conditions had been moved to Mexico City for specialized treatment.

Family members of the victims have called on the government to continue looking for remains and to bring back forensic experts for that purpose.

Funerals already have begun, but the handover of remains has been slow because many of the victims were burned beyond recognition.

The Hidalgo state prosecutor said 54 of the dead could not be readily identified, and require DNA analysis.

Mourners began arriving little by little at the home of one of the victims, while in the adjacent street a hearse carried another corpse.

"He's gone forever," sobbed a woman as the remains of Cesar Jimenez were transferred to a church for a funeral mass attended by dozens of relatives and friends.

At a cultural center, loved ones publicly displayed pictures of the missing.

"We are sick and tired of searching around in every hospital," said Moises Mejia, trying to find his missing wife Karina Ugalde and her sister Angelica.

"We gave some DNA from their dad to see if they are in (nearby) Tula. We want them to search more (near the blast and fire). Why did they go and move all that dirt over there?" he asked.

Another man, Antonio Garcia, wandered about searching for his nephew Lupillo, 17.

"I don't know what he was thinking going over there," he said. "I would always see him buying his gas (at stations). I don't understand why he'd go over there to steal it."

Hundreds of people had been drawn to the place where suspected fuel thieves tapped into a pipeline in the town of Tlahuelilpan.

Images captured by local media showed a torrent of fuel escaping from a pipeline as people converged on the site with buckets and jerrycans to collect gasoline.

A massive explosion engulfed the area in flames, and local media showed images of people screaming as they fled, their clothes in flames, some with severe burns.

Asked whether those hospitalized would be considered suspects, Attorney General Alejandro Gertz said investigators do not seek to "victimize the communities."

"We are going to find those responsible for actions that generated this tragedy," he said. "Victimizing the whole population is not (the investigation's) function nor is it established in the law."

The disaster came during a crackdown by the new government of President Manuel Lopez Obrador on the lucrative illegal business of fuel thefts, which triggered shortages of gasoline.

On Friday, when authorities heard that fuel traffickers had punctured the pipeline, about 25 soldiers arrived and attempted to block off the area, Defense Secretary Luis Crescencio Sandoval told reporters.

But the soldiers were unable to contain the estimated 700 civilians -- including entire families -- who swarmed in to collect the spilled gasoline, witnesses said.

The armed soldiers had been moved away from the pipeline to avoid any risk of confrontation with the crowd when the blast occurred, about two hours after the pipeline was first breached, Sandoval said.

Lopez Obrador, a leftist who took office only weeks ago, traveled to the scene on Saturday.

He did not fault the soldiers, saying: "The attitude of the army was correct. It is not easy to impose order on a crowd." He vowed to continue fighting the growing problem of fuel theft.

"I am deeply saddened by the suffering in Tlahuelilpan," Lopez Obrador wrote on Twitter. He called on his "whole government" to extend assistance.