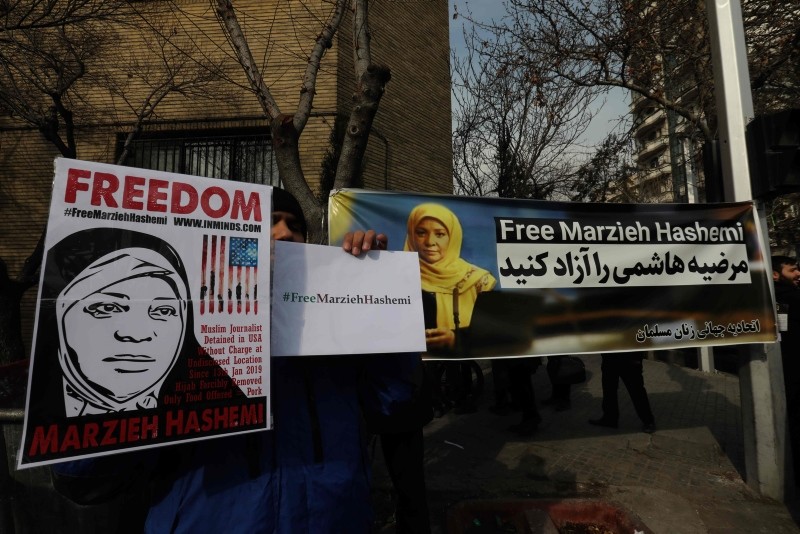 Iranians hold banners bearing messages that call for the release of US-born journalist Marzieh Hashemi, near the Swiss embassy in the capital Tehran on January 20, 2019 (AFP Photo)
by Jan 21, 2019 11:58 pm

Iran's Foreign Minister Javad Zarif on Monday accused the United States of violating the civil rights of black people over its arrest of a journalist working for Iranian state television.

Marzieh Hashemi, a US-born black Muslim convert, was detained on arrival at St Louis Lambert International Airport on January 13, according to family and friends cited by her employer, Press TV.

"The US govt needs to explain how Marzieh Hasehmi -- a journalist and grandmother -- is such a flight risk that she must be incarcerated until she finished her testimony to a grand jury," Zarif wrote on Twitter.

Zarif added that "50 years after MLK assassination, the US still violates the civil rights of black men and women," in reference to the murder in the United States of black civil rights leader Martin Luther King.

A US court said on Friday that Hashemi's testimony was required over an unspecified case but that she was not accused of any crimes.

It said Hashemi had been detained on "a material arrest warrant" and would be freed after she gave testimony to a grand jury investigating unspecified "violations of US criminal law".

Hashemi, who changed her name from Melanie Franklin after converting to Islam, had reportedly been visiting her ill brother and other family members in the United States.

Zarif had previously described Hashemi's arrest as a "political" move by the US that "tramples on freedom of speech."

He also said Hashemi was considered an Iranian national through marriage.