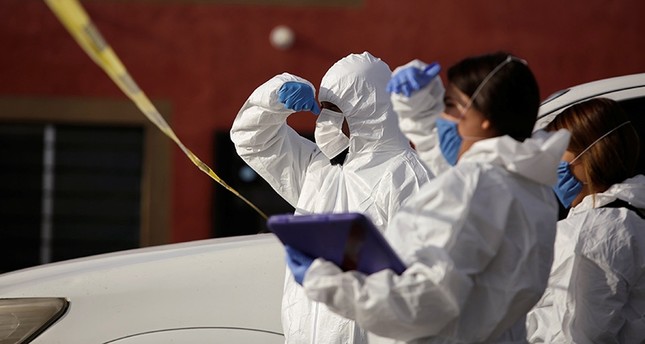 Forensic technicians cover the sun with their hands while standong outside a house where five members of a family were found dead, according to local media, in Ciudad Juarez, Mexico on Jan.16, 2019. (Reuters Photo)
Related Articles

A Mexican journalist was found murdered in the first such case of 2019, authorities said Monday, as the country set a new homicide record for 2018 -- signs of the ongoing toll of Mexico's drug war.

Rafael Murua, a community radio station director in the northern state of Baja California Sur who had received death threats for his work, was found dead in a ditch late Sunday, after being reported missing.

He was the first journalist killed this year in what has become one of the world's deadliest countries for the press, behind only war-torn Afghanistan and Syria, according to watchdog group Reporters Without Borders.

News of Murua's death broke just as Mexico announced it had registered a new murder record in 2018, in violence fueled by a war on the country's powerful drug cartels.

Mexico registered 33,341 homicides last year, the most since national record-keeping began in 1997, the government said.

More than 200,000 people have been murdered in Mexico since the government controversially deployed the army to fight drug trafficking in 2006.

Both Murua's killing and the new record show the grim challenge facing President Andres Manuel Lopez Obrador, an anti-establishment leftist who took office in December with a promise to curb the gruesome violence.

Murua, 34, headed the Radiokashana community radio station in the town of Mulege, in Baja California Sur.

The state is best known for the glamorous beach resorts of Los Cabos. But turf wars between rival drug cartels have fueled an explosion of violence there in recent years.

Murua, who had received death threats late last year, was under the Mexican government's protection program for journalists and rights activists, said Balbina Flores, country director for Reporters Without Borders.

He was enrolled in the program in 2017 and said he had received threats from the local mayor, Flores said.

Murua was again targeted with threats in December, when a new mayor took office, according to local media reports.

"This cowardly crime will not go unpunished," he wrote on Twitter.

"My solidarity to the family and all journalists working in Baja California Sur."

Two other journalists from the state are currently sheltering in Mexico City, in the center of the country, after being targeted with threats or attacks.

Racked by violent crime linked to the drug war and fueled by political corruption, Mexico has registered more than 100 journalists' murders since 2000.

The vast majority of the cases have gone unpunished -- as do more than 90 percent of violent crimes in Mexico.

Lopez Obrador, who was sworn in as president on Dec.1, is promising a new strategy to combat the rampant escalation of violence.

He wants to create a national guard that will officially bring civilian police duties under military control.

Opponents say that will only prolong the militarization of the crackdown on drug cartels and exacerbate human rights abuses, which activists say have soared since the army was sent into the streets.

In a concession to critics, Lopez Obrador agreed to put the new force under civilian command, but opponents say that will do little to resolve the underlying problems.

Creating the national guard will require a constitutional amendment.

The legislation cleared the lower house last week with the required two-thirds majority, in a major victory for Lopez Obrador -- though he complained the bill as passed did not give the military enough powers during the transition to the new force.

The plan still has to pass the Senate, also with a two-thirds majority, and half of Mexico's 32 state legislatures -- most controlled by Lopez Obrador's Morena party.

Mexico has taken down a string of top drug traffickers since deploying the army to fight cartels, including one of the biggest of all, Joaquin "El Chapo" Guzman, the alleged head of the Sinaloa cartel, currently on trial in New York.

But critics say that "kingpin strategy" has only fragmented the cartels, leading to turf wars and infighting.