Maduro announces closure of Venezuela's diplomatic missions in US 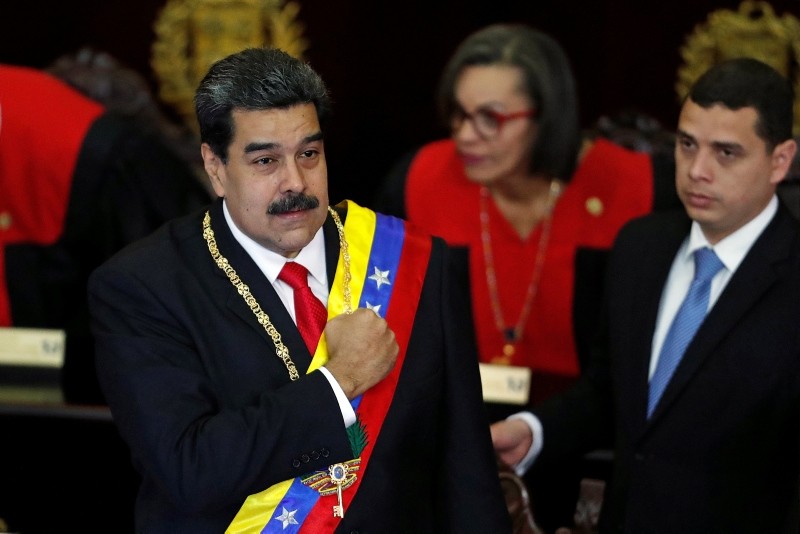 President Nicolas Maduro on Thursday announced his decision to close Venezuelan embassy and all consulates in the United States, one day after he broke off diplomatic relations with Washington in response to U.S. recognition of an opposition leader as interim president.

All diplomatic personnel in the U.S. will return on Saturday after the closure of its embassy and consulates in the country, Maduro said during a speech in the capital Caracas.

Maduro added that he agreed with a call by Mexico and Uruguay for dialogue between Venezuela's government and opposition for a resolution to the South American country's political crisis.

The move came a day after Maduro announced his country cut off diplomatic relations with Washington and gave U.S. diplomats 72 hours to leave the country -- a demand Washington officials have shrugged off, saying diplomatic personnel will stay at the invitation of opposition leader Juan Guaido.

Guaido stunned Venezuelans on Wednesday by declaring himself interim president before cheering supporters in Venezuela's capital, buoyed by massive anti-government protests. And support from the U.S., Canada and numerous Latin American countries, along with the Organization of American States (OAS), immediately rolled in, while Turkey, Russia, China, Iran, Mexico, Bolivia and Cuba expressed their support for Maduro.

Venezuela and the U.S. haven't exchanged ambassadors in nearly a decade, but they have maintained diplomatic staff.

"The tyranny of the now-defunct Maduro regime has for far too long choked the country and its citizens," Secretary of State Mike Pompeo told a meeting of the OAS' Permanent Council. "We call on all our partners and responsible OAS member states to show leadership and pledge support for Venezuela's democratic transition and for interim President Guaido's pivotal role in that."

Pompeo said the U.S. stands ready to provide $20 million in humanitarian assistance to the Venezuelan people, and will do so "as soon as logistically possible."

Thursday's convening of the council comes as a growing number of Latin American nations have lined up behind Guaido, but several during the day's session either continued to back Maduro or called for dialogue between the parties, including Mexico and Uruguay.

Venezuela lashed out at those who have backed Guaido, saying they "are supporting their master: the United States."

"This is a mafia government," said a government representative, referring to the U.S., which she said is a "racist, supremacists imperial power guided by hatred and greed."