US asks for UN Security Council meeting on Venezuela 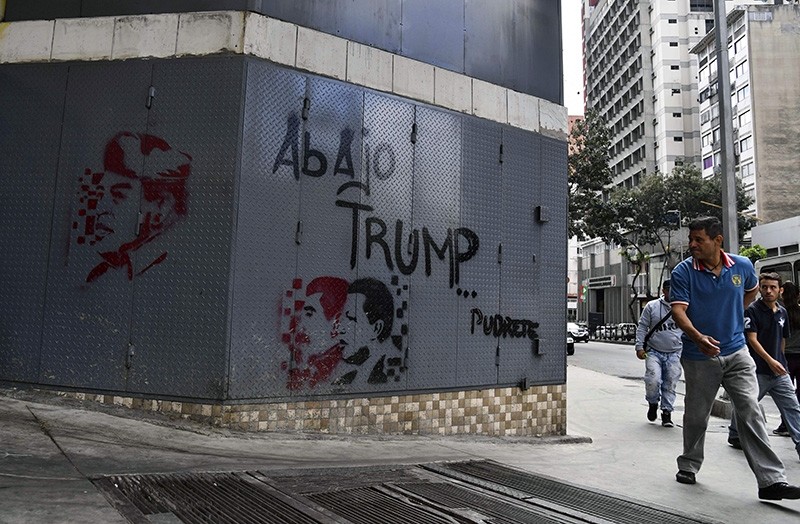 A man walks near a grafitti depicting late Venezuelan president Hugo Chavez (R and L), President Nicolas Maduro (C) with a legend reading ,down with Trump, in Caracas, on Jan. 24, 2019. (AFP Photo)
by Daily Sabah with Agencies Jan 24, 2019 9:42 pm

The United States on Thursday called for a meeting of the U.N. Security Council to discuss the crisis in Venezuela, the U.S. mission to the United Nations said.

The U.S. mission to the U.N. said on Twitter it has "officially requested an open meeting of the U.N. Security Council for Saturday." The meeting was requested for 9 a.m. (1300GMT).

The request comes as President Nicolas Maduro, who was elected president in a vote last year, faces a challenge this week from congress leader Juan Guaido, who declared himself interim president on Wednesday. The United States was among the first countries to back Guaido, followed by many of Venezuela's Latin American neighbors. The Venezuelan military has maintained its support for the elected President Maduro.

U.S. Secretary of State Mike Pompeo, who has been a main voice in U.S. opposition to Maduro, is expected to attend the open meeting requested for Saturday, diplomats said.

"The Secretary-General is concerned over reports of casualties in the context of demonstrations and unrest in Venezuela and calls for a transparent and independent investigation of these incidents," Stephane Dujarric, spokesman for Guterres, said in a statement.

Pope Francis on Thusday said he is following the situation in Venezuela closely and the Holy See supports all efforts to spare its people from further suffering, but he refrained from taking sides.

The Argentine pontiff, Latin America's first pope, is currently on a visit to Panama.

"In Panama, the Holy Father has been informed of the news coming from Venezuela and is closely following the situation as it evolves," spokesman Alessandro Gisotti said.

"He is praying for the victims and for all the people of Venezuela. The Holy See supports all efforts that help save the population from further suffering," he said.

In 2016, the Vatican convened mediation talks between Maduro and the opposition, with little success.