US Senate shuts down bills hoped to reopen government 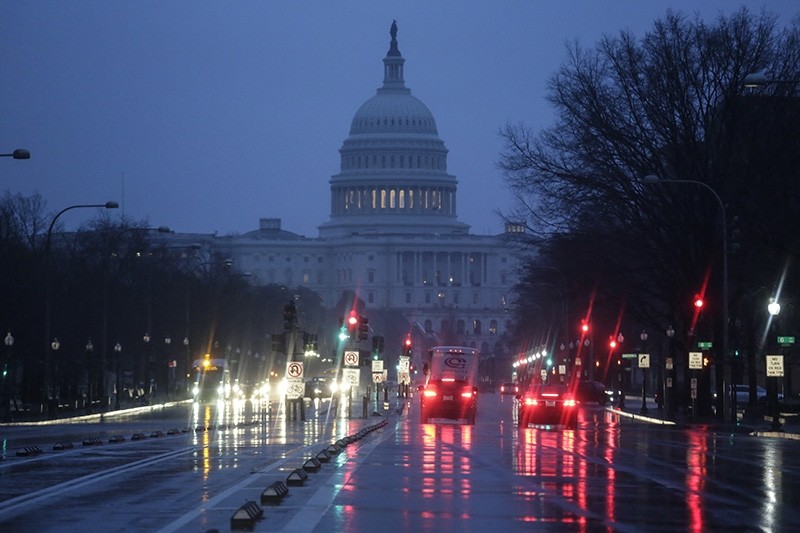 The Capitol is seen early Thursday, Jan. 24, 2019, as rain falls on Pennsylvania Avenue in Washington, with the partial government shutdown in its second month. (AP Photo)
by Compiled from Wire Services Jan 25, 2019 12:02 am

A splintered Senate swatted down competing Democratic and Republican plans for ending the 34-day partial government shutdown on Thursday, leaving President Donald Trump and Congress with no obvious formula for halting the longest-ever closure of federal agencies and the damage it is inflicting around the country.

The Democrat measure would have reopened agency doors through Feb. 8 to give bargainers time to seek a budget accord, an approach that GOP leaders tried last month — only to be undercut by Trump.

The measure had already passed the House, but fell short Thursday of the 60 votes required in the Senate to defeat a GOP filibuster.

The measure -- which also included some immigration policy changes -- earned 50 votes to 47 against, but it needed 60 votes to advance.

The legislative deadlock leaves Congress and the president red-faced and adrift as hundreds of thousands of federal workers, some reliant on food banks to make ends meet, are about to miss a second paycheck.

Polls have shown that the public is blaming Trump for the shutdown and his approval numbers have sunk as the impasse drags on.

Trump was already smarting, after being forced into shelving his annual State of the Union address by top Democrat Nancy Pelosi, the speaker of the House of Representatives, until the government is fully operational.

Though politically bruised, Trump stood firm on his demand for billions of dollars in funding for a border wall as part of an overall budget package.

"Very simply, without a Wall it all doesn't work," he tweeted at Pelosi on Thursday before the Senate votes. "We will not Cave!"

As acrimony in Washington grew, lawmakers across the political spectrum were left searching in vain for an exit strategy for the longest-ever halt to federal operations, as furloughed government employees and contractors vented their fury on Capitol Hill.

"There's no excuse for Senate Republicans not to pass this legislation," Pelosi told reporters, referring to the Democratic plan. "Who can say no to that?"

As the Senate debated the two dueling proposals, Senate Majority Leader Mitch McConnell, R-Ky., said the Democratic plan would let that party's lawmakers "make political points and nothing else" because Trump wouldn't sign it. He called Pelosi's stance "unreasonable" and said, "Senate Democrats are not obligated to go down with her ship."

Senate Minority Leader Chuck Schumer, D-N.Y., criticized the GOP plan for endorsing Trump's proposal to keep the government closed until he got what he wants.

Even so, there were suggestions of movement.

Vice President Mike Pence attended a lunch with GOP senators before the vote and heard from lawmakers eager for the standoff to end, participants said. Sen. Roy Blunt, R-Mo., said their message to Pence was "Find a way forward."

In consultation with their Senate counterparts, House Democrats were preparing a new border security package they planned to roll out Friday. Despite their pledge to not negotiate until agencies reopened, their forthcoming proposal was widely seen as a counteroffer to Trump. Pelosi expressed "some optimism that things could break loose pretty soon."

The Democratic package was expected to include $5.7 billion, the same amount Trump wants for his wall, but use it instead for fencing, technology, personnel and other measures. In a proposal that the rejected Senate GOP plan mirrored, Trump on Saturday proposed to reopen government if he got his wall money. He also proposed to revamp immigration laws, including new restrictions on Central American minors seeking asylum in the U.S. and temporary protections for immigrants who entered the country illegally as children.

In another sign of hope, Thursday's vote on the Democratic plan represented movement by McConnell. For weeks, he'd refused to allow a Senate vote on anything Trump wouldn't sign and has let Trump and Democrats try reaching an accord. McConnell has a history of helping resolve past partisan standoffs, and his agreement to allow Thursday's vote was seen by some as a sign he would become more forcefully engaged.

With the impacts of the shutdown becoming increasingly painful, however, lawmakers on both sides were trumpeting their willingness to compromise in the battle over border security and immigration issues, such as protection against deportation for immigrants brought to the country illegally as children.

"We can work this out," said House Appropriations Committee Chairwoman Nita Lowey, D-N.Y.

At a panel discussion held by House Democrats on the effects of the shutdown, union leaders and former Homeland Security officials said they worried about the long-term effects. "I fear we are rolling the dice," said Tim Manning, a former Federal Emergency Management Agency official. "We will be lucky to get everybody back on the job without a crisis to respond to."