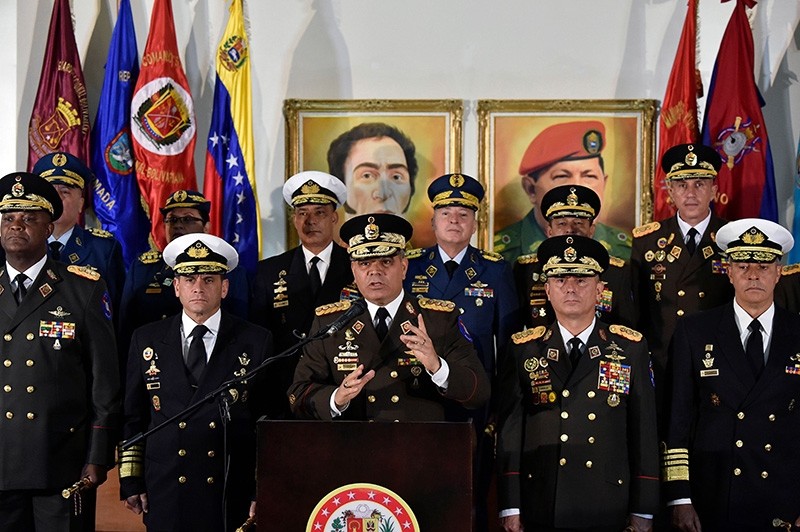 Speaking at a news conference surrounded by top military brass, Padrino said Guaido, the president of the opposition-controlled National Assembly, was attempting a coup "against democracy, against our constitution, against the President Nicolas Maduro: the legitimate president."

"A civil war will not solve Venezuela's problems," Padrino cautioned, calling for "dialogue" and for "a constitutional solution" to the crisis.

Padrino attributed Guaido's move to "far-right sectors" serving the interests of the United States and other countries which were trying to spread "anarchy and chaos."

The chiefs of the country's eight main defense regions have pledged loyalty to Maduro, the minister said.

The army wanted to avoid divisions and "confrontation among Venezuelans," he added.

Padrino said the U.S. and other governments were carrying out an economic war against Venezuela, an OPEC nation with the world's largest crude reserves.

Guaido caused a sensation on Wednesday when he told a crowd of tens of thousands of opposition supporters that he was declaring himself "acting president" amid a fresh wave of deadly street clashes. However, there were no signs that security forces heeded Guaido's call to join the anti-Maduro movement.

The Socialist government responded by preparing to rally top military leadership "in support of the constitutional president," as Padrino announced. He added the military show "backing for the sovereignty" of Venezuela. That was a warning shot to Maduro's foreign critics as they rallied behind Guaido.

In a united and seemingly coordinated front, the U.S., Canada and another dozen mostly Latin American countries, including Brazil, Colombia and Argentina, quickly announced that they supported rival Guaido's claim to the presidency. President Donald Trump promised to use the "full weight" of U.S. economic and diplomatic power to push for the restoration of Venezuela's democracy.

"The people of Venezuela have courageously spoken out against Maduro and his regime and demanded freedom and the rule of law," he said in a statement.

Maduro fired back by breaking diplomatic relations with the U.S., the biggest trading partner for the oil-exporting country, and ordering American diplomats to get out of the country within 72 hours. Washington said it would ignore the order.

Turkey, on the other hand, has reiterated its support for Maduro.

"Trump's attitude has shocked me," President Recep Tayyip Erdoğan said Thursday. "One has to respect what comes out of the ballot box. We are against all undemocratic bids."

"I believe the people of Venezuela will continue to support Maduro, who has emerged victorious from the polls," he added.

Left-leaning governments Cuba and Bolivia continue to back Maduro. Mexico, where leftist Andres Manuel Lopez Obrador took office last year, has dropped the previous government's opposition to Maduro and said it will follow a policy of non-intervention. Russia dismissed the political crisis in Venezuela as an attempted coup and expressed concern over suggestions of possible foreign military intervention, calling President Maduro the crisis-hit country's legitimate leader.

Maduro began a second six-year term on Jan. 10, having won elections in May that were boycotted by the opposition and rejected by 12 Latin American nations, including Colombia and Brazil. U.S. Vice President Mike Pence has largely taken the lead within the Trump administration in condemning Maduro. He called the inauguration a sham and made clear the United States did not recognize the election result.

Maduro repeated his frequent warning that a U.S. invasion is imminent. He accused U.S. National Security Adviser John Bolton of overseeing a plot to replace him with a dictator. He alleged that Washington is using "dirty dollars, bled from the U.S. empire" to train 734 mercenaries in neighboring Colombia to carry out the plot.