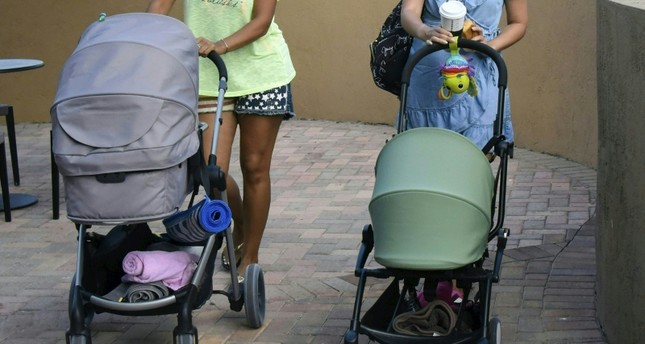 In southern Florida's Sunny Isles Beach, Russian tourists Anna and Helen sip coffee with their husbands and newborn babies: a common scene in what has become a prized destination for well-off foreigners looking to secure U.S. citizenship for their children.

Under the shadow of luxury skyscrapers - among them Trump Towers - exists an army of well-dressed women, either pregnant or pushing top-of-the-line strollers. Most are Russian or from former Soviet Union countries.

The weather, white-sand beaches and dazzling turquoise waters are common reasons given for traveling to give birth in this city of 20,000 people, north of Miami.

But one 34-year-old, who gave her name only as Anna, was more direct.

"For the American passport!" she told AFP, smiling. She arrived in the U.S. while expecting now 2-month-old Melania.

Both she and compatriot Helen, mother to a 3-month-old, said tens of thousands of dollars and months of planning went into their trips.

The attraction is clear. President Donald Trump does not like it, but according to the U.S. constitution, children born on American soil automatically gain citizenship, opening up highly sought-after opportunities to study and work.

And why Sunny Isles specifically?

Upon turning 21, baby Melania will also be able to sponsor visas for her parents to come to the U.S. - another policy that has disgruntled Trump.

The trend is big business: Miami Mama, a company in neighboring Hallandale Beach, has been organizing travel packages for Russian mothers since 2009.

Charging between $6,900 and $49,000, they will coordinate everything from interpreters and apartments to medical care and citizenship documents, according to the firm's website.

And none of this is illegal, according to U.S. immigration laws.

But according to NBC, the FBI raided Miami Mama in 2017, arresting one employee for making false statements in federal documents to obtain passports for children.

Miami Mama - whose logo shows a pregnant woman against the backdrop of an American flag - did not respond to AFP's requests for comment.

A tentative estimate by the Center for Immigration Studies - a conservative group that advocates curbs on immigration - suggested in 2015 that maternity tourism to the United States could account for some 36,000 births each year.

But there is no reliable data on how many U.S. citizens the practice creates.

In 2014, Vera Muzyka, head of a firm helping Russian mothers in Miami, told The Moscow Times that in that city, 40 to 60 babies were being born each month to citizens of Russia or former Soviet Union countries.

Sunny Isles Beach earned itself the nickname "Little Moscow" from around 2010, when Russian beauty salons, supermarkets, restaurants and realtors started to crop up.

Nowadays, you're more likely to find syrnikis - a type of sweet cheese pancake - than Cuban croquetas, while dried fish has become a staple bar snack. And while southern Floridians are used to seeing shop signs in English and Spanish, in Sunny Isles it's English and Russian - with real estate offices, notaries and businesses offering "passport services" the most common around town.

by The Daily Beast, many Russian families stay in luxury Trump Tower condominiums.

But while connections between Trump and the Kremlin have been under investigation for over two years, there is no evidence the president benefits from Russian tourism in Florida.

Suspicious of the press, most of Sunny Isles Beach's Russians won't speak to the media, and those who do prefer to remain anonymous or give only their first name.

That included Kate, eight months pregnant with her fourth child, who would only tell AFP, "We plan to give birth."

Entering a specialty Russian supermarket with her husband and children, the 35-year-old added - true to form - that it was the balmy climate that brought them to Florida.