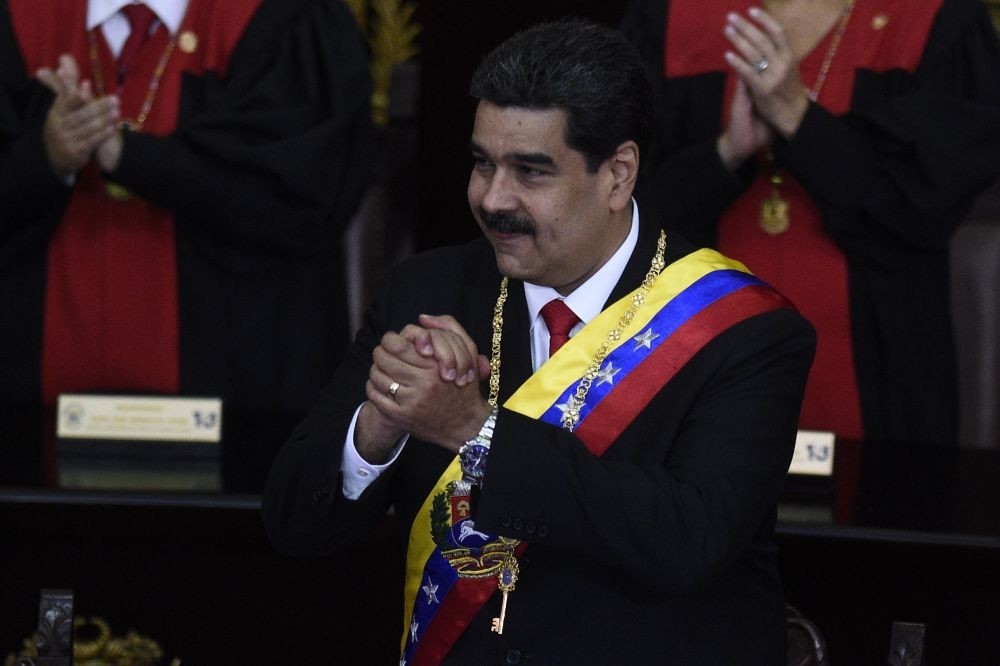 Venezuelan President Nicolas Maduro attends the opening ceremony of the judicial year at the Supreme Court of Justice, Caracas, Jan. 24, 2019.
by Daily Sabah Jan 26, 2019 12:09 am

In the face of increasing outside attempts to intervene in its politics, Venezuela praised Turkey's government and public support

"We have become accustomed for the support of Turkey's public, state and President [Recep Tayyip] Erdoğan. Regardless of their background, people from all political fractions and social classes in Turkey have lent their support," Bracho told reporters Friday at a press conference.

He added that Venezuela was the first Latin American country to back Turkey during the July 15, 2016 coup attempt and that bilateral relations between Caracas and Ankara will be further improved in the future.

Speaking on the latest developments in Venezuela, Erdoğan said Friday that Turkey is against any kind of coup attempts, wherever they may be.

"We do not stand by coup plotters, and we never will. We are against them wherever they are in the world," Erdoğan said at a rally in Erzurum on Friday introducing the Justice and Development Party's (AK Party) mayoral candidates.

Attending Erdoğan's presidential oath-taking ceremony last year, Maduro praised the Turkish people who poured onto the streets to protect the country's democracy against coup plotters on the night of July 15.

Erdoğan voiced solidarity with Maduro a day after the U.S. recognized opposition leader Juan Guaido as the interim leader of Venezuela.

Presidential Spokesman İbrahim Kalın tweeted that Erdoğan told Venezuelan President: "My brother Maduro! Stay strong, we are by your side." Kalın added that Turkey would "maintain its principled stance against coup attempts."

Bracho said Washington is preparing to launch a proxy war against Venezuela by wielding powers in the region, possibly referring to countries including Brazil and Argentine, who had previously backed U.S. President Donald Trump's announcement. "[Former President Barack] Obama defined Venezuela as a hostile country. How can Venezuela pose a threat against a country that has the largest army in history?" he added.

He stressed that democratic countries elect presidents through elections. "Maduro was elected by the votes of Venezuelan people, and no other person has the authority to declare himself president. We have one of the most modern and transparent elections systems. The last elections were observed by many representatives from around the world," he underlined.

The Venezuelan leader began a second six-year term on Jan. 10, having won elections in May that were boycotted by the opposition and rejected by 12 Latin American nations, including Colombia and Brazil.

U.S. Vice President Mike Pence has largely taken the lead within the Trump administration in condemning Maduro. He called the inauguration a sham and made it clear the U.S. did not recognize the election results.

The Venezuelan president said, however, that the U.S. announcement was a blatant attack on the country's sovereignty, adding that nothing can justify such a move over the people's will. "The source of support of Venezuelan opposition is not coming from the public but instead from external powers," he said, denying the possibility of a military coup against the Maduro government.

Venezuela's powerful military threw its weight behind Maduro on Thursday. Flanked by military top brass, Defense Minister Vladimir Padrino, himself a general, declared 56-year-old Maduro "the legitimate president" and vowed to defend his authority against an attempted "coup d'etat."

Following Padrino's lead, eight generals, in turn, reiterated their "absolute loyalty and subordination" to the socialist leader in messages carried on state television.

While being against any foreign intervention in Venezuela, Russia on Friday offered to mediate between the government and the opposition in Venezuela if necessary, saying it was ready to cooperate with all political forces that acted responsibly, RIA news agency reported.