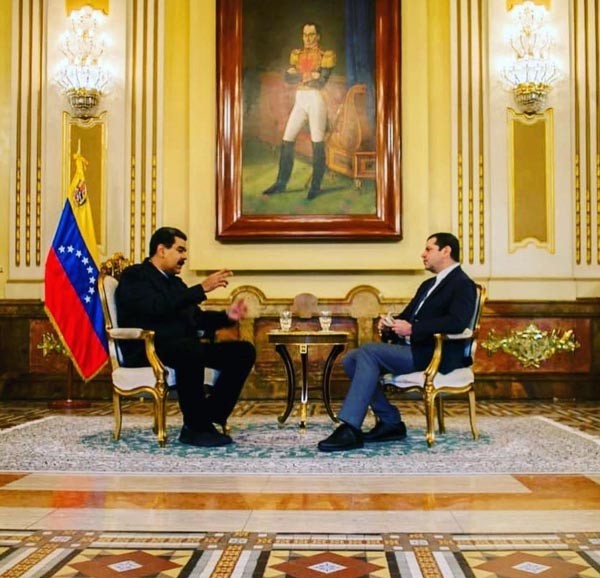 "Nobody can give us an ultimatum," Turkish broadcaster CNN Türk quoted him as saying in an interview.

President Recep Tayyip Erdoğan has declared his support for Maduro after opposition leader Juan Guaido proclaimed himself interim president on Wednesday. During the interview, Maduro thanked Erdoğan for his support, describing him as a "brave man."

On Saturday, France, Germany and Spain gave Maduro eight days to announce free and fair elections or they will recognize Guaido, the speaker of the opposition-dominated National Assembly, as Venezuela's leader.

EU foreign policy chief Federica Mogherini also issued a statement that said the bloc as a whole could recognize Guaido if steps toward new elections were not taken "over the next days."

"Venezuela will not allow anyone to impose on us any decision or order," Arreaza said, adding that Caracas has "excellent friends" it can call on for support to defend itself.

In Sunday's interview dubbed into Turkish from Spanish, Maduro reminded that the presidential elections were carried last year and he won with 65 percent support, and the parliamentary elections will be carried out in 2020. The president also defended that Venezuela's election system is very modern and backed by a national monitoring system.

Maduro said opposition leader Juan Guaido had violated the constitution by declaring himself leader. Answering to a question on whether Guaido should be arrested, Maduro said he's not a jury but issue will be resolved before the judiciary.

Maduro also said he was open to dialogue, and that a meeting with U.S. President Donald Trump, while improbable, was not impossible.

Maduro on Wednesday announced that Caracas was breaking off diplomatic relations with the U.S. and gave it a 72-hour deadline to pull out its diplomats from Venezuela after U.S. President Donald Trump's government recognized Guaido as interim president.

However, Venezuela on Saturday suspended its expulsion order, the foreign ministry in Caracas said.

The ministry said that it was now negotiating the establishment of a U.S. interests office in Venezuela and will allow U.S. embassy personnel to remain in the country while talks take place.

Talks about an interest section will have a 30-day limit and if no agreement is reached embassy personnel will then have to leave the country, according to the statement.

Also on Saturday, the top military representative at the Venezuelan embassy in Washington distanced himself from Maduro in a video posted on his Twitter account.

Colonel Jose Luis Silva declared himself a supporter of Guaido, saying: "He is the only legitimate president."

Maduro accused the U.S. of having links with all the recent developments in Venezuela, saying Washington thinks of the country as its backyard.

"We have faced many attacks since the death of [former President Hugo] Chavez but since Trump administration took over, this has gone worse. Since this man with extreme ideas came to power the U.S. attacks us and now they planned a coup attempt," Maduro said.

"American news agencies and the Washington Post wrote that Trump himself gave the order for this coup attempt to Mr. Guaido on Jan. 22," he added.

Trump snubs Venezuela, Latin America and the entire world, Maduro said, adding: "As a Latin American, I can say that he hates us. This is unacceptable since there is no place for racism and despise in today's world."

Maduro also described U.S. State Secretary Mike Pompeo's words as the "words of a declining country," saying that there are many countries currently on the path of developing.

Hundreds of thousands of Venezuelans have taken to the streets this week to demand Maduro's resignation. He won a second term in May elections widely labeled as undemocratic and was sworn in on Jan. 10 amid mounting international pressure on him to step down.