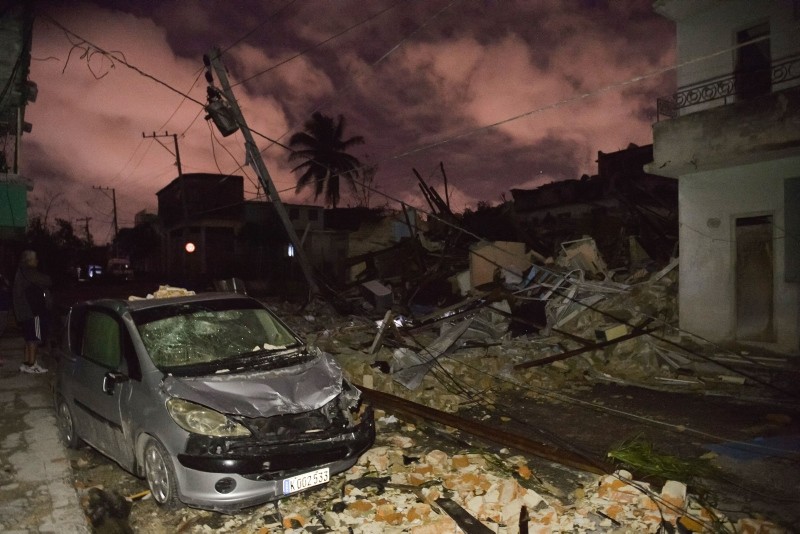 A damaged car is seen among building rubble in the tornado-hit Luyano neighborhood in Havana early on January 28, 2019. (AFP Photo)
by Compiled from Wire Services Jan 28, 2019 12:00 am

This was the first twister to hit the Cuban capital in decades and was described by the daily of the ruling Communist Party as an "extraordinary" event.

President Miguel Diaz-Canel tweeted that three people had been killed and more than 170 injured as he toured one of the hardest-hit districts, confirming photos and videos of the damage posted on social media.

"We are touring areas affected by the atmospheric phenomenon of great intensity. The damage is severe and up to now we regret the loss of three lives and we are attending to 172 injured," Diaz-Canel said.

State-run media had warned residents in western Cuba that an approaching cold front from the north and winds from the south would create high winds, thunderstorms and heavy rainfall in the area.

"Those of the island accustomed to these warnings did not suspect the magnitude of what was coming," the Communist Party daily Granma said.

Pictures of destroyed housing, cars and small trucks turned upside down, flooded and rubble strewn streets were posted on Twitter under the hashtag #Havana #tornado, along with a shot of the huge twister touching down in the city.

The reports of deaths and injuries were preliminary as rescue workers combed through damaged buildings in the blacked-out neighborhoods where much of the housing is dilapidated.

Power poles in the city's 10th of October borough have been knocked over or were leaning precariously early Monday, held up only by their electrical lines. A palm tree more than 30 feet (9 meters) tall had crushed a pre-revolutionary American car.

The tornado ripped metal sheeting off many roofs and hurled the deadly shards through the air. The streets are littered with bricks fallen from housing facades.

Menendez, who was home Sunday night when the tornado hit, says "from one moment to the next, we heard a noise like an airplane falling out of the sky. The first thing I did was go hug my daughters" — who are nine and 12.

Menendez spoke Monday near the Hijas de Galicia Hospital, whose patients, all expectant mothers or mothers with newborns, were evacuated to another hospital. Many glass windows in the seven-story hospital had been sucked out of their frames by the power of the wind, leaving curtains flapping in the breeze.

In the city's Luyano neighborhood storm debris -- including parts of a balcony ripped off an old building -- blocked the streets, AFP photographers reported.

The tornado, spawned by a powerful storm that originated in the Gulf of Mexico, hit western Cuba with winds of up to 100 kilometers (62 miles) per hour.

People described the tornado as having "the sound of a jet engine," and reported feeling changes in the environmental pressure when it arrived, Armando Caymares with the Institute of Meteorology said.

The tornado "caught me in the street, in the car with my wife and children," actor Luis "Panfilo" Silva wrote on his social media account.

"I had to dodge fallen trees, flooded areas and strong winds until I managed to get home. We experienced great fear," he wrote.