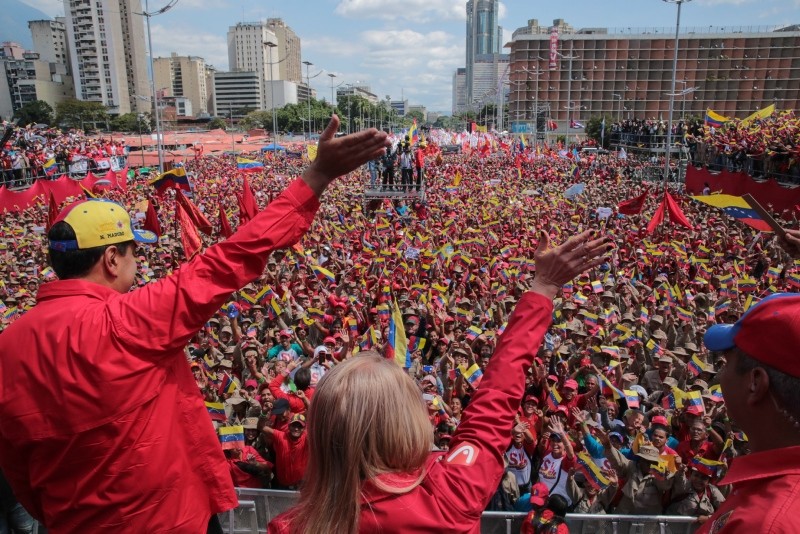 Handout picture released by the Venezuelan presidency showing Maduro (L) and his wife Cilia Flores wave at the crowd during a gathering to mark the 20th anniversary of the rise of power of the late Hugo Chavez, in Caracas on February 2, 2019 (AFP)
by Anadolu Agency
Feb 03, 2019 12:00 am

Venezuelan President Nicolas Maduro on Sunday said that the U.S. wanted to go back to the 20th century where the natural resources of a country were exploited through Washington-backed coups.

Maduro spoke to Spanish La Sexta channel and commented on the U.S. attitude, EU ultimatum and the Venezuelan people's readiness for self-defense.

When asked what he would tell U.S. President Donald Trump if he was standing before him, he replied: "Stop, stop Donald Trump. You are making mistakes that will get blood on your hands."

Maduro asserted that the U.S. wanted to exploit Venezuela's natural resources. "This is impossible. Latin America and the Caribbean cannot be the backyard of the U.S.," he said.

Venezuela has been rocked by protests since Jan. 10 when Maduro was sworn in for a second term following a vote boycotted by the opposition. Tensions climbed on Jan. 23 when Juan Guaido declared himself interim president.

The U.S., Canada and most Latin American countries have recognized Guaido, the National Assembly president, as the legitimate leader of Venezuela, but Maduro has so far refused calls to step down.

He has accused the U.S. of orchestrating a coup against his government but said he is open to dialogue with the opposition.

The U.S. has led an international campaign to apply economic and diplomatic pressure on Maduro, including sanctioning on Monday the country's state-owned oil company and a joint venture with its Nicaraguan counterpart.

Russia and China both opposed the U.S. call to support Guaido, and condemned any international interference in the affairs of Venezuela. Turkey and Iran have also put their weight behind Maduro.

On EU heavyweights' -- Spain, France, Germany, Belgium, the Netherlands and the U.K. -- threat to recognize Guaido as the interim president of Venezuela on Feb. 5, Maduro said: "We don't accept anyone's ultimatum."

"This is like me saying: 'I give you seven days to recognize the Republic of Catalonia or I'll take measures.' International policy cannot be based on ultimatums," he said, referring to Spain's Catalonia where a separatist movement is ongoing.

Regarding a question whether Venezuela could go to a civil war, Maduro said that nobody could provide a definite answer to that.

"It all depends on the aggression and craziness of the northern empire [the U.S.] and its Western alliance. We are leading a simple life in our country and don't want anyone to interfere in our internal affairs. And, we are preparing to defend our country," he added.

Maduro said that the people of Venezuela had organized a militia on his orders comprising 50,000 trained personnel.