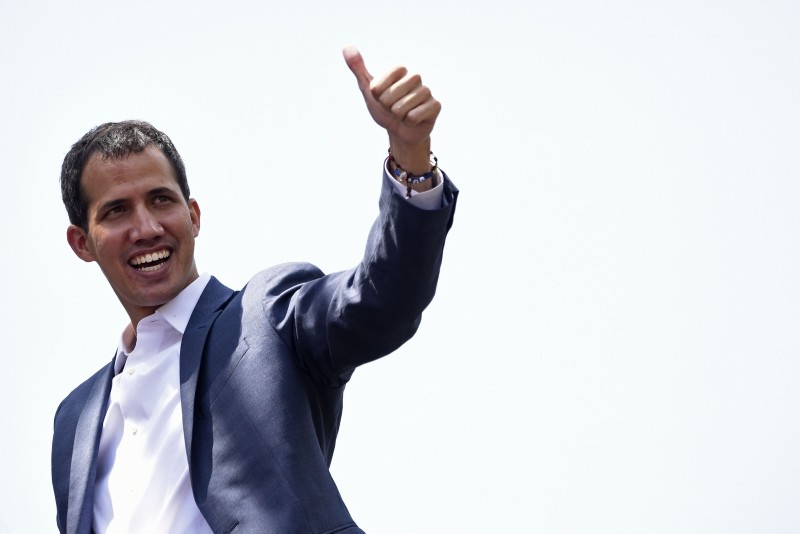 "Venezuelans have the right to express themselves freely and democratically. France recognizes @jguaido as 'interim president' to implement an electoral process," President Emmanuel Macron said on Twitter.

Spanish Prime Minister Pedro Sanchez told reporters in Madrid on Monday "we are working for the return of full democracy in Venezuela: human rights, elections and no more political prisoners."

Swedish Foreign Minister Margot Wallstrom told Swedish broadcaster SVT the vote that brought Maduro to power was not a "free and fair election."

The United Nations however, rejected to take sides, saying it will not join any group of nations seeking to resolve the crisis in Venezuela

"The U.N. secretariat has decided not to be part of any of these groups in order to give credibility to our continued offer of good offices to the parties to be able at their request to help find a political solution," Guterres told reporters, rejecting an invitation to attend a meeting of neutral countries in Uruguay this week.

Venezuela's government said in response that it would revise bilateral relations with European Union member states that have recognized Guaido as the legitimate head-of-state.

The government "expresses its most energetic rejection of the decision adopted by some European governments, in which they officially submit to the U.S. administration's strategy to overthrow the legitimate government of President Nicolas Maduro," it said in a statement.

Maduro also wrote a letter to Pope Francis requesting to renew dialogue amid a political crisis and western pressure for him to step down, the Vatican Secretary of State, Cardinal Pietro Parolin, said in Abu Dhabi on Monday.

In an interview with Italian broadcaster Sky TG24, of which excerpts were released earlier on Monday, Maduro said he had sent the letter "for help in the process of facilitating and reinforcing dialogue."

Italian President Sergio Mattarella said his country should align itself with European Union allies on the Venezuelan crisis.

"Sense of responsibility and clarity on a position shared with all of our allies and our #European Union partners are required," Mattarella said in a speech in Rome, quoted by his office on Twitter.

"In the choice facing us, there can be no uncertainty nor hesitation: a choice between popular will and calls for real democracy on one side, and brutal force and sufferings of the civilian population on the other," the president added.

Several European nations on Jan. 26 said they would recognize Guaido as interim president unless a plan for fresh elections was announced within eight days.

Maduro quickly rejected the deadline, saying "Nobody can give us an ultimatum."

Guaido declared himself Venezuela's legitimate ruler on Jan. 23 and already had the support of the U.S., Canada and most South American nations.

Meanwhile, Turkey, Russia, China, Iran, Cuba, Bolivia and Nicaragua, along with other countries, have stood by President Maduro, opposing the undemocratic intervention.