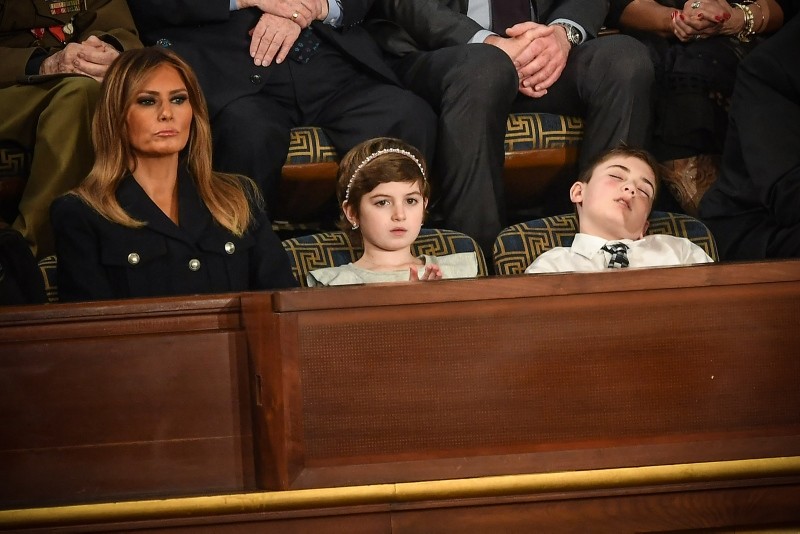 In this file photo taken on February 5, 2019 US First lady Melania Trump (L) with Grace Eline and Joshua Trump, special guests of President Donald Trump, attend the State of the Union address at the US Capitol in Washington, DC. (AFP Photo)
by Feb 06, 2019 7:44 pm

Between the late bedtimes and early morning tweets the leader of the free world is renowned for needing just four hours' sleep but his young State of the Union guest Joshua Trump hardly lived up to the name -- nodding off mid-speech.

The 11-year-old -- who is not related to Donald Trump but has been bullied at school because of his surname -- had been invited as a special guest of the first family to the prestigious annual address.

The youngster was seen looking presidential in a white shirt and dark tie as formalities commenced in Washington on Tuesday evening but he soon succumbed to the apparently soporific cadence of Trump's words.

Images of him catching 40 winks quickly went viral on Twitter, where many hailed him as an unlikely talisman of the anti-Trump "resistance" while one wag remarked: "Joshua Trump spoke for all Americans."

"Joshua Trump is a Trump I can get behind," quipped another while a third enthused: "Not all heroes wear capes."

Forced to endure months of bullying for sharing the same surname as the president, Joshua dropped out of school and told his mother he had lost the will to live.

He says achieving national fame was never his goal and he just wanted to fit in.

"They say are you related to Donald Trump? And I say, 'Would I be here if I'm related to him?'" the schoolboy told the news site Inside Edition in December.

The constant mockery became so bad that his parents eventually pulled him out of school in 2017 and taught him at home for a year, before re-enrolling him when he was due to start middle school.

His school instructed his teachers not to use his surname any more, and disciplined five students, who apologized to the boy.

Melania Trump has made her anti-bullying campaign the centerpiece of her legacy as first lady, although there have been few concrete steps aside from public appearances and roundtable discussions.

Her campaign has been undermined by frequent criticism of her husband for denigrating public attacks on political foes, critics and the media, as well as petty name-calling.

"The first lady is in a very difficult position," Claudio Cerullo, the founder of the site TeachAntiBullying.org, told AFP.

"I'm hopeful that she's very impactful upon on her husband."