US military 'ready to protect' diplomats in Venezuela, US admiral says 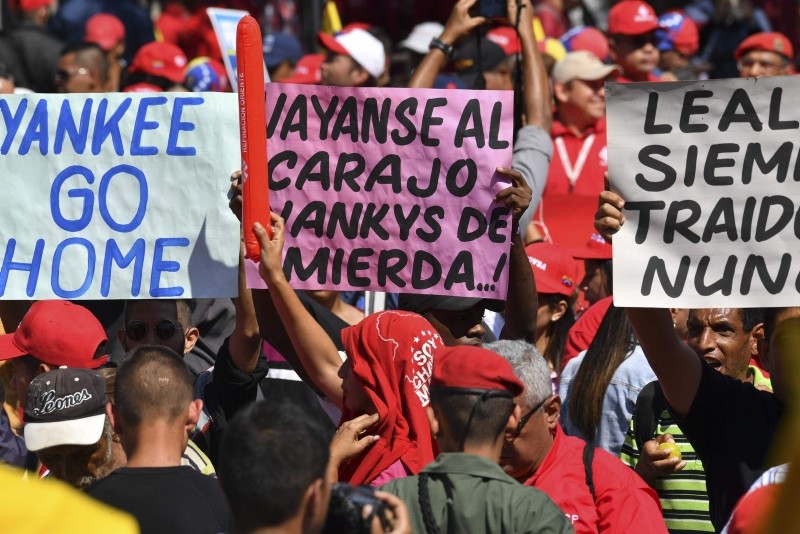 Workers from Venezuela's state oil company, PDVSA, participate in an ,anti-imperialist, march promoted by the government to support President Nicolas Maduro, in front of the Miraflores Presidential Palace in Caracas, on January 31, 2019. (AFP Photo)
by Compiled from Wire Services Feb 07, 2019 7:19 pm

The U.S. military is prepared to protect U.S. personnel and diplomatic facilities in Venezuela if needed, the U.S. admiral in charge of American forces in South America said on Thursday.

"We are prepared to protect U.S. personnel and diplomatic facilities if necessary," Navy Admiral Craig Faller, the head of U.S. Southern Command, said during a Senate Armed Services Committee hearing.

He did not provide any details on how the U.S. military might respond.

The U.S., which has not ruled out a military intervention in crisis-wracked Venezuela, was the first to recognize Guaido as acting president, followed by a dozen Latin American countries. In his State of the Union address Tuesday night, President Donald Trump reaffirmed U.S. support for Guaido, saying, "We stand with the Venezuelan people in their noble quest for freedom."

Trump earlier warned he could use military force in Venezuela if Maduro does not hand over power. European nations also recognized Guaido as the interim leader until new elections are held after Maduro rejected a European ultimatum to call for fresh polls.

Maduro, last week, warned that leaders in Washington were motivated by the desire "to get their hands on" Venezuela's massive oil reserves, "as they did in Iraq and Libya." Venezuela has been rocked by protests since Jan. 10 when President Nicolas Maduro was sworn in for a second term following a vote boycott by the opposition.

Tensions climbed on Jan. 23 when Guaido declared himself interim president, but Maduro has so far refused calls to step down.