Blackface scandals highlight US' troubled racial past - and present 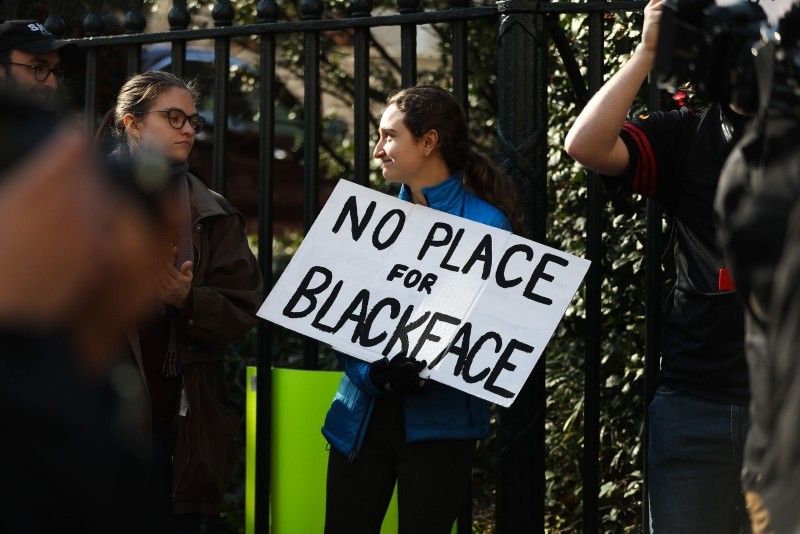 Protestors rally against Virginia Governor Ralph Northam outside of the governors mansion in downtown Richmond, Virginia on February 4, 2019. (AFP Photo)
by Feb 08, 2019 9:56 am

The painful history of blackface in America was highlighted this week as two top Virginia Democrats came under fire after admitting to having blackened their faces to resemble African-Americans while in college in the 1980s.

White Americans have been blackening their faces to mimic blacks for two centuries. While the practice is less common than it was decades ago, African-American scholars say it persists in some corners as evidence of racism.

WHEN DID BLACKFACE BEGIN IN THE U.S.?

Blackface began in New York vaudeville shows of the 1830s, when slavery was still legal in the U.S. South, and featured white performers who blackened their faces with burnt cork or shoe polish to caricature blacks on plantations as lazy and stupid.

With ugly, exaggerated features, and wearing tattered clothes, these "minstrels" made fun of enslaved Africans as superstitious, hypersexual and cowardly, according to the National Museum of African American History and Culture in Washington.

"It supported the idea of slavery," said Wornie Reed, director of the Race and Social Policy Center at Virginia Tech. "If these people are like that, then of course they should be in slavery and taken care of."

WHY DID BLACKFACE BECOME SO POPULAR?

An American minstrel sub-industry of songs, sheet music, makeup, costumes and toys flourished through the mid-19th century even as the Northern and Southern states fought the Civil War that led to the abolition of slavery in 1865. Songs that defamed African-Americans became popular in the 1880s and 1890s.

"From the very beginning, putting on a blackface has been to act like either a foolish negro or a dangerous nigger," said David Pilgrim, who is African-American and a former sociology professor who founded the Jim Crow Museum at Ferris State University in Big Rapid, Michigan.

The name of the minstrel genre's most famous character, "Jim Crow," applied to laws adopted by U.S. states that segregated blacks and whites and remained on the books through the mid-20th century.

WHY DIDN'T BLACKFACE DIE OUT?

Professional blackface performances petered out in the United States in the latter 20th century, though it remained a feature of some variety shows and movies, notably the 1986 film "Soul Man."

Pilgrim said the practice lingers on in what he called "safe white spaces" like college campus sororities and fraternities where there is no one to challenge it.

African-American scholars, including Reed, said the continued appearance of blackface points to racism in U.S. culture.

"White supremacy still reigns, and the person who does blackface may not subscribe to all the tenets of it, but they are operating under that general idea," said Reed.

WHAT DOES THIS MEAN FOR U.S. POLITICS?

Both Democrats and Republicans condemned the images emerging in Virginia this week, but the scandal was an unwelcome blow to Democratic Party leaders in a swing state that will play a key role in the 2020 White House race and where the Democrats have been gaining ground, helped by growing strength with women and minorities.

Republican President Donald Trump on Twitter said he believed the scandal would boost his party's chances in 2020.