US in direct contact with Venezuelan military, urging defections 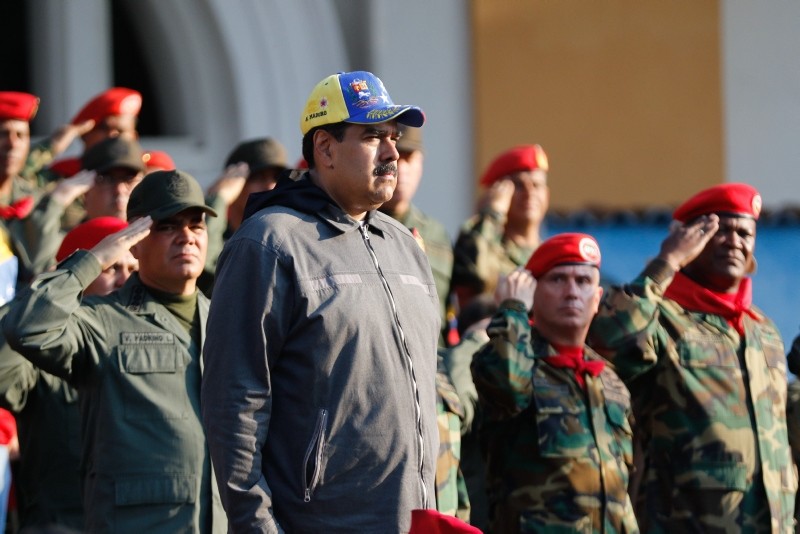 Venezuelan President Nicolas Maduro attends a military ceremony to commemorate the ,27th Anniversary of the Military Rebellion of the 4FEB92 and National Dignity Day,, in Caracas, on February 4, 2019 (AFP Photo)
by Feb 27, 2019 12:52 am

The United States is holding direct communications with members of Venezuela's military urging them to abandon leader Nicolas Maduro and is also preparing new sanctions aimed at increasing pressure on him, a senior White House official said.

The Trump administration expects further military defections from Maduro's side, the official told Reuters in an interview, despite only a few senior officers having done so since opposition leader Juan Guaido proclaimed himself interim president last month, earning the recognition of the United States and dozens of other countries.

"We believe these to be those first couple pebbles before we start really seeing bigger rocks rolling down the hill," the official said this week, speaking on condition of anonymity. "We're still having conversations with members of the former Maduro regime, with military members, although those conversations are very, very limited."

The official declined to provide details on the discussions or the level at which they are being held, and it was unclear whether such contacts could create cracks in the Venezuelan socialist leader's support from the military, which is pivotal to his grip on power.

With the Venezuelan military still apparently loyal to Maduro, a source in Washington close to the opposition expressed doubts whether the Trump administration has laid enough groundwork to spur a wider mutiny in the ranks where many officers are suspected of benefiting from corruption and drug trafficking.

Guaido says the May 2018 vote in which Maduro won a second term as president was a sham and on Jan. 23 invoked a constitutional provision to declare himself president, promising free and fair elections.

The U.S. government also sees European allies as likely to do more to prevent Maduro from transferring or hiding Venezuela government assets held outside the country, the U.S. official said.

Major European countries have joined the United States in backing Guaido but they have stopped short of the sweeping oil sanctions and financial measures that Washington has imposed.

At the same time, the Trump administration is readying further possible sanctions on Venezuela, the official said.

Previous rounds have targeted dozens of Venezuelan military and government officials, including Maduro himself, and last month finally hit the OPEC member's vital oil sector. But the administration has stopped short of imposing so-called "secondary" sanctions, which would punish non-U.S. companies for doing business with the Venezuela government or the state oil monopoly PDVSA.

The U.S. official said that Washington had every tool available to apply pressure on Maduro and his associates "to accept a legitimate democratic transition."

The U.S. government is also weighing possible sanctions on Cuban military and intelligence officials whom it says are helping Maduro remain in power, a second U.S. official and person familiar with the deliberations have told Reuters.

Maduro's government has accused Guaido, who has galvanized Venezuela's opposition, of attempting to stage a U.S.-directed coup.

General Francisco Yanez of the air force's high command became the first active Venezuelan general to recognize Guaido, but he is one of about 2,000 generals. Venezuela's chief military attache to the United States also said he was defecting late last month.

Guaido has actively courted members of the military with promises of amnesty and preferential legal treatment if they disavow Maduro and disobey his orders, and Washington this week raised the prospect of dropping sanctions on senior Venezuelan officers if they recognize Guaido.

Maduro still has the support of the military high command, and now routinely appears in pre-recorded events at military bases where officers stand behind him and chant triumphal slogans such as "Loyal always, traitors never."