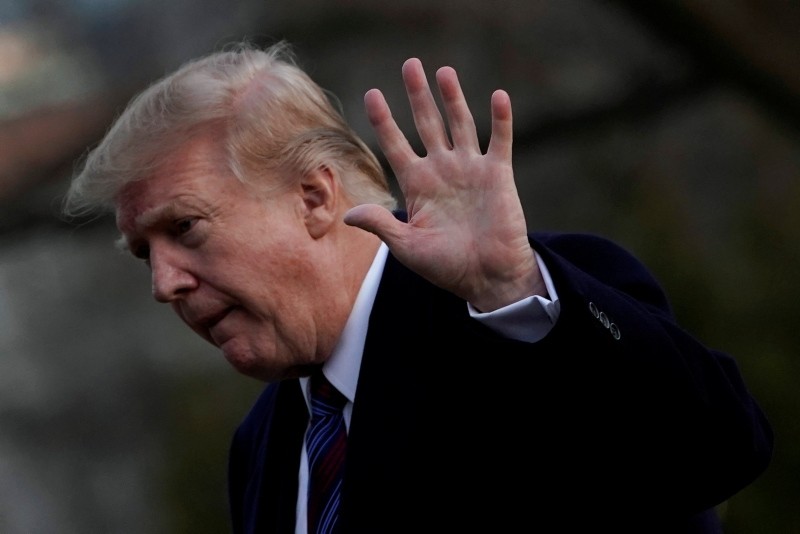 U.S. President Donald Trump waves to the media as he returns to the White House in Washington, U.S., after an annual physical test at the Walter Reed National Military Medical Center in Bethesda, Maryland, February 8, 2019. (Reuters Photo)
by Anadolu Agency Feb 27, 2019 12:52 am

U.S. President Donald Trump will not respond to a legally-required Senate request to determine whether sanctions are warranted against Saudi Crown Prince Mohammed bin Salman for the murder of Washington Post columnist Jamal Khashoggi, a senior administration official said Friday.

The president has until midnight to formally respond to a letter from former Senate Foreign Relations Chairman Bob Corker and Ranking Member Bob Menendez which asked Trump to make the determination under the Global Magnitsky Act within 120 days.

Juan Pachon, a Menendez spokesman, was unwavering, insisting that the deadline is not up for debate.

"The law is clear," Pachon said in a statement emailed to Anadolu Agency. "The President has no discretion here. He's either complying with the law or breaking it."

The administration official, who spoke on condition of anonymity, however, told Anadolu Agency that Trump "maintains his discretion to decline to act on congressional committee requests when appropriate".

"The State Department updates Congress regularly on the status of actions related to the killing of Jamal Khashoggi," the official added, pointing to actions the administration took to pull the visas of 21 Saudis and sanction another 17 accused of being tied to his murder.

But those actions have been called insufficient by many in Congress who insist the journalist's slaying could not have been carried out without bin Salman's explicit approval.

Under the Global Magnitsky Act, a president has 120 days to respond to a request from the Senate Foreign Relations chair and ranking member to determine if sanctions are warranted against a person who has been accused of rights violations.

Khashoggi was brutally murdered inside the Saudi consulate in Istanbul shortly after he entered the diplomatic facility on Oct. 2. Riyadh initially denied any role in the killing but has since sought to blame his death on a botched rendition operation being carried out by rogue agents.

Saudi Arabia has sought to distance the crown prince from Khashoggi's murder, as has Trump.

Menendez, the Senate Foreign Relation Committee's top Democrat, introduced legislation Thursday alongside a bipartisan group of lawmakers to halt U.S. support for the Saudi-led coalition's war in Yemen, and which would require the U.S. to institute sanctions on those responsible for Khashoggi's murder.

Menendez said the legislation is needed because the Trump administration "has no intention of insisting on full accountability for Mr. Khashoggi's murderers".

"It is time for Congress to step in and impose real consequences, to fundamentally reexamine our relationship with the Kingdom of Saudi Arabia and with the Saudi-led coalition in Yemen," he said. "As I warned the administration last year, we will not accept the killings of more civilians and journalists with impunity and without consequence."