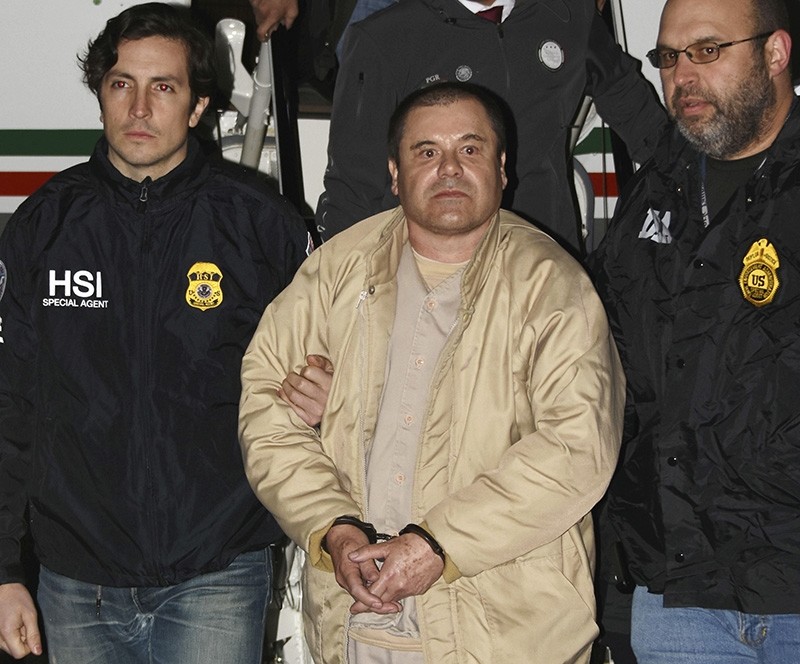 A U.S. jury on Tuesday found Guzman guilty on 10 counts, including trafficking tens of thousands of kilograms of drugs into the country. He is expected to spend the rest of his life in prison.

The president said such allegations would be investigated if a formal complaint was made, but that he preferred to "look ahead" and to launch "a new phase, without corruption, without impunity."

"I would like those who take these paths (of crime) to reconsider and to think that freedom is a very precious gift," Lopez Obrador said at his daily news conference.

"May (the Guzman verdict) be a teaching, may it be a lesson, to think that real happiness is not money, is not something material, is not cheap luxury, is not fame," said the leftist president, who took office Dec. 1.

Lopez Obrador mused that "happiness is having a clear conscience and being at peace with one's self and others."

The president has launched a campaign aimed at convincing people not to break the law, under the slogan, "We're all going to behave."

It is not clear if the raids that resulted in Guzman's capture would occur under Lopez Obrador, who recently said "the strategy is no longer to carry out raids to capture capos."

After his conviction on Tuesday, Guzman is likely headed to the U.S. federal government's "Supermax" prison in Florence, Colorado, also known as ADX for "administrative maximum," experts say.

Guzman has an unparalleled record of jailbreaks, having escaped two high-security Mexican prisons before his ultimate capture and extradition to the United States.

"El Chapo fits the bill perfectly" for the maximum security prison, said Cameron Lindsay, a retired warden who ran three federal lockups, including the Metropolitan Detention Center in Brooklyn. "I'd be absolutely shocked if he's not sent to the ADX."

Located outside an old mining town about two hours south of Denver, Supermax's hardened buildings house the nation's most violent offenders, with many of its 400 inmates held alone for 23 hours a day in 7-by-12-foot (2.1-by-3.7 meter) cells with fixed furnishings made of reinforced concrete.

Prisoners at Supermax spend years in solitary confinement and often go days "with only a few words spoken to them," an Amnesty International report found. One former prisoner, in an interview with The Boston Globe, described the lockup as a "high-tech version of hell, designed to shut down all sensory perception."

Most inmates at Supermax are given a television, but their only actual view of the outside world is a 4-inch window. The window's design prevents them from even determining where they are housed in the facility. Human interaction is minimal. Prisoners eat all meals in the solitude of their own cells, within feet of their toilets.

The facility itself is guarded by razor-wire fences, gun towers, heavily armed patrols and attack dogs.

"If ever there were an escape-proof prison, it's the facility at Florence," said Burl Cain, the former longtime warden of the maximum-security Louisiana State Penitentiary at Angola. "It's the prison of all prisons."

While federal authorities have not said for certain where El Chapo will be housed, he's staring at "a sentence from which there is no escape and no return," U.S. Attorney Richard Donoghue said after Tuesday's verdict.

Guzman's confinement leading up to his three-month trial included remarkable security measures reflecting his immense flight risk. He has been housed in solitary confinement in a high-security wing of the Metropolitan Correctional Center, a Manhattan lockup known as "Little Gitmo" that has held notorious terrorists and mobsters.

Authorities have routinely shut down the Brooklyn Bridge to shuttle "El Chapo" to federal court in a police motorcade that includes a SWAT team and ambulance tracked by helicopters. Heavily armed federal officers and bomb-sniffing dogs have patrolled outside the federal courthouse in Brooklyn. Officials were so concerned about security, in fact, that Guzman was forbidden from hugging his wife at his trial.

That apparently won't be a problem if he winds up in Supermax, where all visits are non-contact, and prisoners are separated from their visitors by a thick plexiglass screen.

"Other than when being placed in restraints and escorted by guards, prisoners may spend years without touching another human being," the Amnesty International report found.