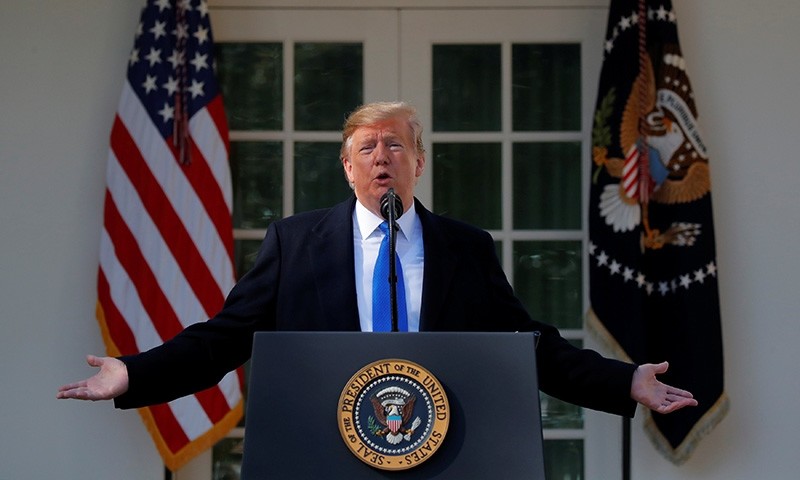 U.S. President Donald Trump on Friday said there will be a U.S. announcement on Syria in the next 24 hours, as Turkey, Russia and European allies wait to see how he will carry out his December decision to withdrawal all 2,000 U.S. troops from the country.

"We have a lot of great announcements having to do with Syria and our success with the eradication of the caliphate and that will be announced over the next 24 hours," Trump said, referring to Daesh terror group, during Rose Garden event at the White House.

The U.S. has been backing the Syrian Democratic Forces (SDF), consisting mainly for PKK-affiliated People's Protection Units (YPG) terrorists, in its fight against Daesh in Syria, despite outcry from its NATO ally Turkey. Trump's decision to withdrawal from Syria was welcomed by Ankara, but the declaration has yet to be actualized. Last month, the Pentagon confirmed additional troops were being sent to protect U.S. forces and equipment as they prepare to leave.

Trump also said Friday he would declare a national emergency to fund the U.S.-Mexico border wall.

"I am going to be signing a national emergency," Trump said as he claimed illegal immigration marked "an invasion of our country."

In a rare show of bipartisanship, lawmakers voted Thursday to fund large swaths of the government and avoid a repeat of this winter's debilitating five-week government shutdown. The money in the bill for border barriers, about $1.4 billion, is far below the $5.7 billion Trump insisted he needed and would finance just a quarter of the 200-plus miles (322 kilometers) he wanted this year.

To bridge the gap, Trump announced that he will be spending roughly $8 billion on border barriers — combining the money approved by Congress with funding he plans to repurpose through executive actions, including the national emergency. The money is expected to come from funds targeted for military construction and counterdrug efforts, but aides could not immediately specify which military projects would be affected.

Despite widespread opposition in Congress to proclaiming an emergency, including by some Republicans, Trump was responding to pressure to act unilaterally to soothe his conservative base and avoid appearing like he's lost his wall battle.

Word that Trump would declare the emergency prompted condemnations from Democrats and threats of lawsuits from states and others who might lose federal money or said Trump was abusing his authority.

In an unusual joint statement, House Speaker Nancy Pelosi, D-Calif., and Senate Minority Leader Chuck Schumer, D-N.Y., said such a declaration would be "a lawless act, a gross abuse of the power of the presidency and a desperate attempt to distract" from Trump's failure to force Mexico to pay for the wall, as he's promised for years.

"Congress will defend our constitutional authorities," they said. They declined to say whether that meant lawsuits or votes on resolutions to prevent Trump from unilaterally shifting money to wall-building, with aides saying they'd wait to see what he does.

New York state Attorney General Letitia James said Friday she would challenge President Donald Trump's use of his national emergency powers in order to build a wall on the southern border.

"Declaring a national emergency without legitimate cause could create a constitutional crisis," James said in a statement.

"This action will harm Americans across the country by diverting funds necessary to handle real emergencies and real disasters to advance the president's personal agenda," she added.

"We will not stand for this abuse of power and will fight back with every legal tool at our disposal."

Trump said Friday he expects to be sued over his decision to deploy his emergency powers to build the wall, using billions of dollars in federal funds allocated for other purposes.

Trump said the move was necessary to stem an immigration "crisis" on the U.S. border with Mexico.

"The courts will determine that. I expect to be sued. I shouldn't be sued," he said at the White House.

"Sadly it will go through a process and happily, we'll win. I think," he said.

Legal experts and Democratic opponents in Congress say Trump is stretching his legal authorities and the definition of "emergency".

"It would be hard to imagine a weaker case for a national emergency than this one," said Democratic Representative Adam Schiff.

"I am confident the courts will sternly rebuke this declaration, by swiftly upholding the lawsuits which are sure to challenge today's action.".